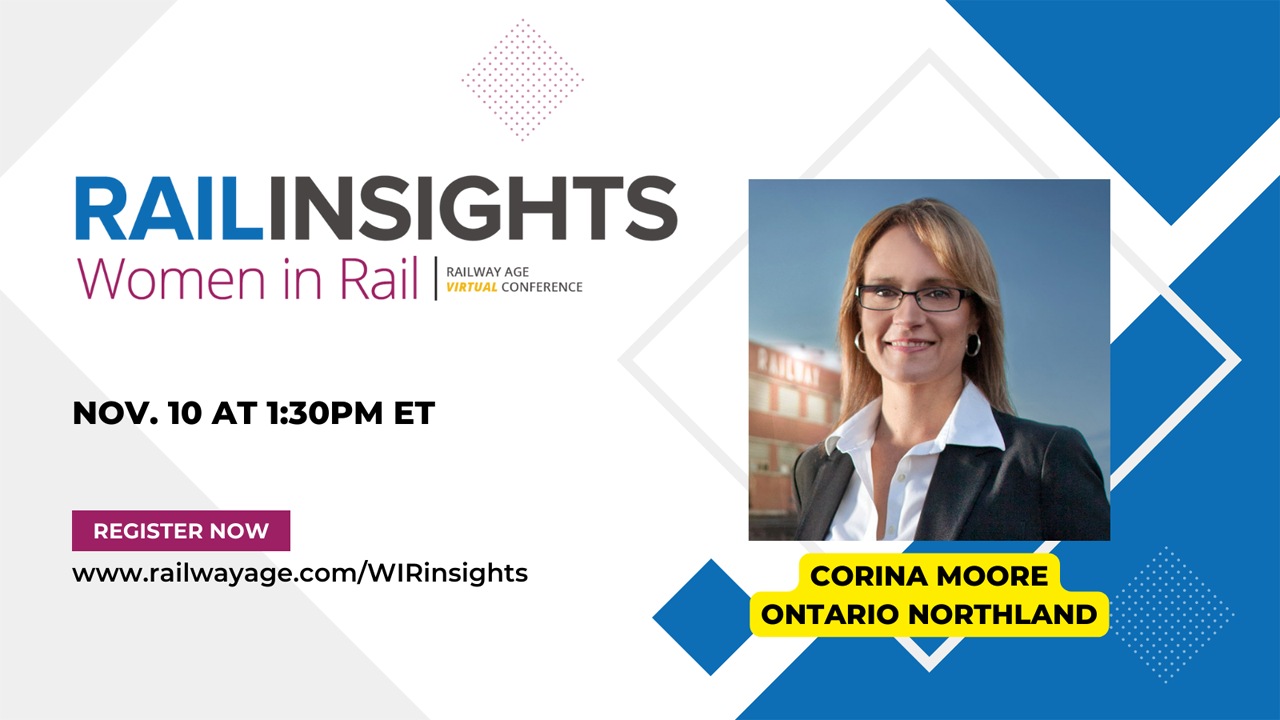 Railway Age’s inaugural Rail Insights: Women in Rail Conference will feature Ontario Northland President and CEO Corina Moore, one of our first Women in Rail award honorees. Hearing from leading industry women like Moore is just one reason to participate in this virtual event, to be held Nov. 10, starting at 1:30 p.m. ET. Need more reasons? Here are five.

The 2022 Rail Insights: Women in Rail Conference is your opportunity to participate in a dialogue with key women who are driving their businesses forward while making a difference and effecting change. These outstanding women are making their mark in a historically male-dominated industry with a fresh vision, as well as a commitment to service and collaboration.

A native of the region served by Ontario Northland, Moore joined the company in 2005 and worked her way up to COO, when she helped lead an initiative to transform the company, which was threatened with defunding by the provincial government.

Moore was named President and CEO in 2014—the first woman president of a major Canadian railway—after serving in an interim capacity since October of that year. At a company that has employed generations of area families since its founding in 1902, Moore introduced Moving Forward, a program designed to “improve efficiency, grow revenues and promote the value of Ontario Northland’s transportation expertise.”

She has teamed with employees, municipal leaders and community groups across the North region to encourage transparency and absorb creative ideas to successfully revitalize the organization. Ontario Northland secured new contracts with tour train operator Rocky Mountaineer, the city of Montreal, and expanded to provide freight car and locomotive overhaul and repair services to the North American marketplace.

In November 2017, Railway Age recognized Moore as part of its inaugural Women in Rail program honoring 10 visionary rail industry women. She was the very first woman to appear on the cover of Railway Age in more than 160 years of publishing. The following year, the League of Railway Women (LRW) named Moore as its Outstanding Woman of the Year.

Since 2017, Railway Age has recognized the growth in leadership roles for women in the railway industry with our annual Women in Rail Awards.

In addition to its speakers, our 2022 Rail Insights: Women in Rail Conference is being supported by a number of sponsors, including TrinityRail (platinum); BNSF (gold); and Union Pacific (bronze).

Registration includes access to the three-hour live event, as well as the ability to view it on demand for six months.

• To inquire about sponsorship opportunities, contact Jonathan Chalon at [email protected] or (212) 620-7224.