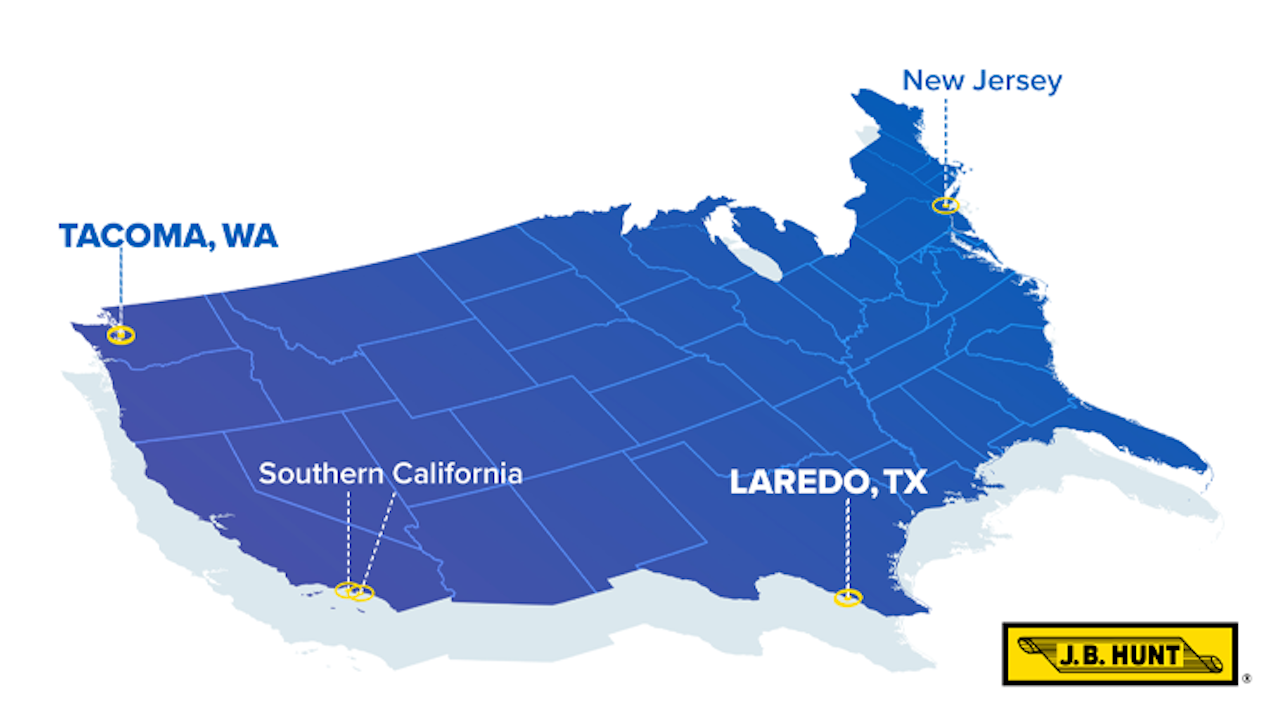 According to the company, both new operations will “enable J.B. Hunt to transfer customers’ international freight to equipment for domestic transport using the company’s transportation assets and capacity solutions.” In addition to services already offered in the Northeast and Southern California, J.B. Hunt says it recently began operations at a facility at the U.S./Mexico border and plans to open a facility in the Pacific Northwest by November.

The Tacoma, Wash.-based facility will service freight arriving at the Seattle and Tacoma ports and “help relieve constraints resulting from the increase of international shipping demand,” J.B. Hunt says. The operation will also complement a direct container-only joint service BNSF launched in August between its Tacoma South facility and Chicago. BNSF and J.B. Hunt announced a major joint initiative earlier this year “to enhance intermodal capacity in the supply chain.”

The Laredo operation, which, according to J.B. Hunt, is one of the first transloading facilities available after crossing the border to enter the U.S., will provide a direct opportunity to growing nearshoring operations in Mexico while continuing support for inbound and outbound cross-border traffic. J.B. Hunt’s facility is located at 9002 Killam Industrial Boulevard in Laredo. It will serve Kansas City Southern/Kansas City Southern de México (KCSM).

Union Pacific (UP) and KCSM both operate across the Laredo, Tex.-Nuevo Laredo, Mexico border crossing.

Construction is expected to start in October or November on a second KCS international rail bridge at the Laredo Gateway. The new bridge, projected to cost $75 million, will effectively double capacity at this key rail border connection, KCS said. The project is made possible by the USMCA (United States-Mexico-Canada Agreement), which replaced NAFTA (North American Free Trade Agreement) in 2019. The capacity increase is crucial for KCS, as its pending merger with CP is expected to increase cross-border freight traffic.

Based on its “industry-disrupting model and the success of previous operations,” J.B. Hunt says its transloading service footprint now encompasses “four of the largest ocean ports and the largest land port of entry into the U.S.” All four facilities, the company says, are located within proximity to port and/or rail terminals and offer seamless access to J.B. Hunt’s 53-foot intermodal container fleet and highway services, including the company’s J.B. Hunt 360box® drop-and-hook trailer program.

“The complexities of international shipping continue to impact how our customers bring freight into the domestic supply chain,” said J.B. Hunt President of Intermodal and Executive Vice President Darren Field. “By growing the reach of our transload service and managing the drayage and loading processes for our customers, we can provide new levels of process oversight and visibility into their freight activity, particularly the critical first mile segment.”

J.B. Hunt opened its first company-owned transload facility in November 2021 to assist shippers in the New York metro area with port drayage, transloading and inland linehaul solutions. The company expanded its transload footprint in July with a new facility and operations in Commerce, Calif., to support international cargo in the Los Angeles and Long Beach areas.

In February, UP told the Surface Transportation Board (STB) that the potential Canadian Pacific (CP)-KCS combination without conditions “would likely cause a significant loss of competition, especially for traffic moving via the Laredo Gateway.” CPKS —the U.S.-Mexico-Canada rail network formed by the proposed CP–KCS merger—would control KCSM, “the only railroad serving the Mexican side of the critically important Laredo Gateway,” UP wrote in its 343-page filing to STB, which is reviewing the merger application.