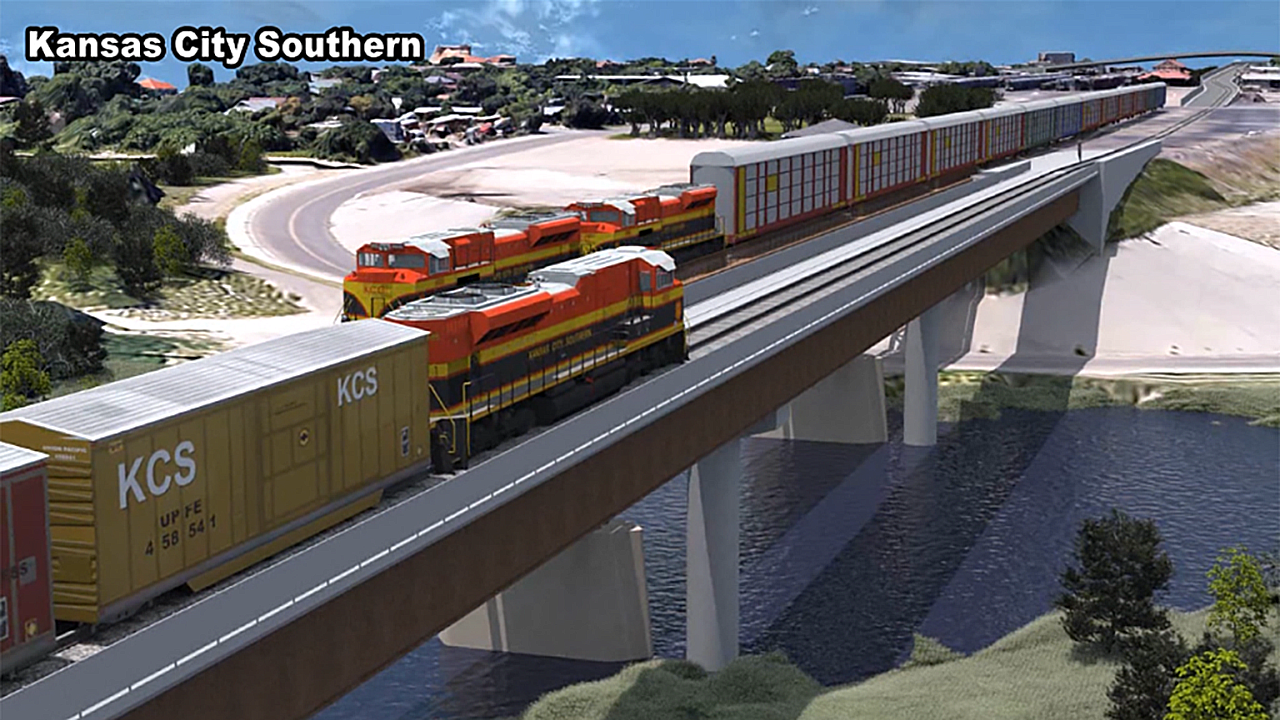 Construction is expected to start in October or November on a second Kansas City Southern international rail bridge at the U.S./Mexico border connecting the border cities of Laredo, Tex. and Nuevo Laredo, Mexico.

The new bridge, projected to cost $75 million, will effectively double capacity at this key rail border connection, which is used by KCS and its Mexican subsidiary, Kansas City Southern de México (KCSM. Currently, 28-32 trains per day cross the border at this location. The project is made possible by the USMCA (United States-Mexico-Canada Agreement), which replaced NAFTA (North American Free Trade Agreement) in 2019. The capacity increase is crucial for KCS, as its pending merger with Canadian Pacific to form transnational CPKC (Canadian Pacific Kansas City) is expected to increase cross-border freight traffic.

KCSM President and General Manager Oscar Del Cueto Cuevas said the Laredo/Nuevo Laredo border connection “is the most important” of all the U.S./Mexico crossings.

“On the infrastructure side, we have approval on the U.S. side to build a second span of the international bridge,” KCS President and CEO Pat Ottensmeyer told Railway Age during a joint November 2021 interview with his 2022 Co-Railroader of the Year, CP President and CEO Keith Creel. “We are planning to do that in probably 2023, and that will increase capacity substantially. The bridge we have today is a single-line bridge. In terms of working with the customs and security agencies on both sides of the border, we’re hoping to replicate at the Southern border the processes that have existed for a long time between the U.S. and Canada. The security concerns are different, so that’s going to be a challenge. But we’re also working with labor to improve the efficiency of how we move trains across the border. I heard a quote recently from a group that convened former ambassadors of Mexico and the U.S. to talk about issues, and some of these things to be talked about in the summit between the Presidents. And the quote was, ‘We have a 21st century economy. We have 20th century infrastructure, and we have 19th century processes.’ Not too much of an exaggeration. Over the years, we have located two inspection facilities on the North side of the border that are now shared by the Mexican and U.S. customs agencies. Where there were two separate inspections and other things taking place on both sides of the border for northbound and southbound freight, we have consolidated those working with the federal agencies to co-locate in the same facility on U.S. soil. That has really been helpful in streamlining the processes, but there’s a lot more work to be done.”

Close to one year later, those plans are coming to fruition. Presidential permits to build the bridge have now been approved by the Mexican government, though a few final border permits are awaiting approval, Del Cueto Cuevas noted. Construction is expected to take two years.

The bridge project comes at the same time as the proposed Binational River Project, which includes a “binational river park,” whose renderings and proposals include schematics of the new rail crossing over the Rio Grande River.