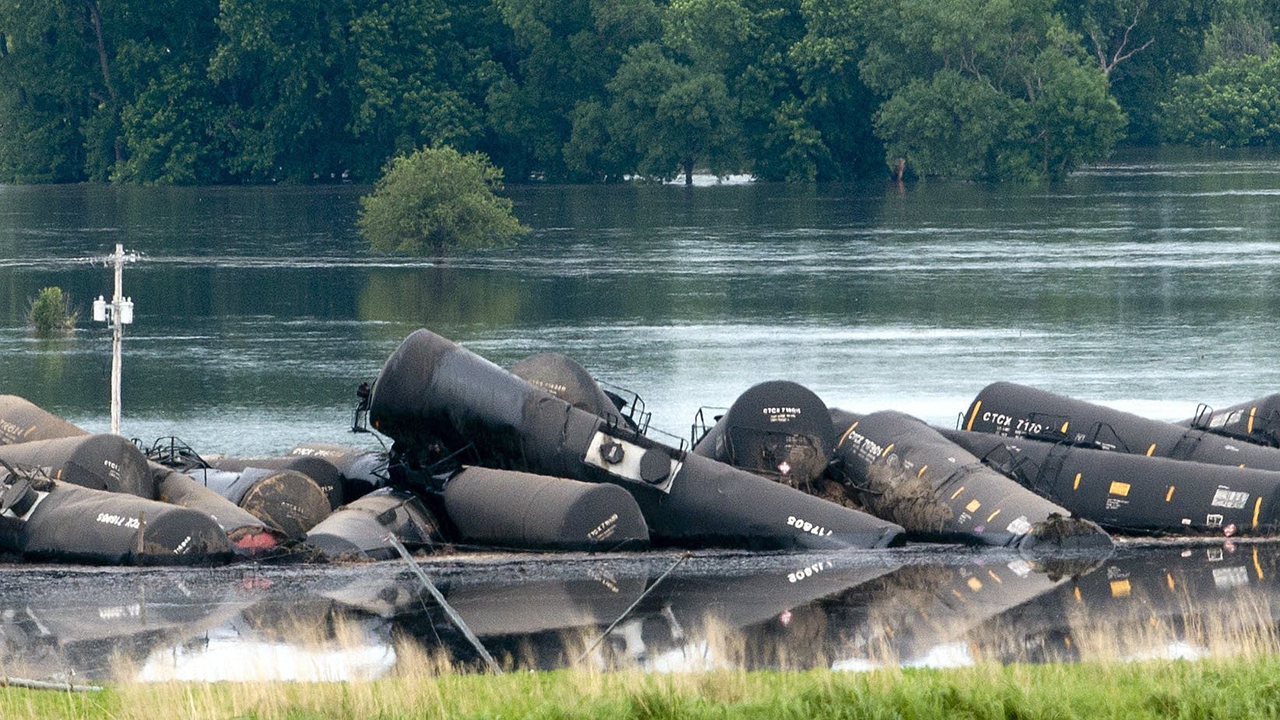 Industry watchers greeted the news of the recent BNSF derailment in Doon, Iowa, as typical ho-hum news. 32 tank railcars hauling crude derailed on a stretch of track that had been compromised by floodwaters. Several of the cars were ruptured and there was a crude spill. Emergency services (BNSF and others) were able to contain the size of the spill, and residents of the area were evacuated as a precaution. Luckily for all parties involved, there was no conflagration whatsoever as a result of the derailment.

It was noted that the tank railcars involved in the derailment were DOT 117R cars. A DOT 117R is a railcar that has been retrofitted to meet the standards of HM-251, put in place by the USDOT in May 2015 and confirmed by Transport Canada. The required tank shell thickness in a DOT 117R is 7/16-inch.

Leaving aside the cause of the derailment (a stretch of track that had recent been flooded), it would be easy to review the news on this event and walk away with a good feeling about the railroad industry having made changes to protect the health and safety of the environment, and citizens who may be at risk in a derailment. The industry is moving (and in this case had moved) to a more stringent standard. One or all the elements of that change in tank railcar design—a detachable bottom outlet valve handle, full-height head shields, tank shell thickness—could have been the factor that prevented more serious consequences in the Iowa derailment.

It was surprising to hear from certain corners of the shipper community that, on the heels of the derailment, BNSF was making overtures to their customers indicating that it would only offer contract rates for the DOT 117J car while holding back or refusing to offer contract rates on the DOT 117R. As word of the BNSF policy change spread through the industry, industry watchers (shippers, manufacturers and lessors) were immediately alarmed. The issue? Three years after the implementation of HM-251 and a higher safety standard, BNSF was telling customers that an approved design of tank railcar, the DOT 117R, was going to face a restriction on use. This story was reported by Railway Age, sourcing Jarrett Reshaw at Reuters. It has also been anticipated that Union Pacific (UP) will quickly follow BNSF’s lead and make a similar adjustment.

This continues the crude by rail (CBR) roller-coaster. In addition to wild demand cyclicality, the industry has been transitioning from the DOT 111A design to a DOT 117 design for flammable commodities in a quick time frame (by rail industry standards). During this three-year timeframe, railroads moving crude have used a variety of strategies to accelerate the pace of change in the tank railcar supply for hauling crude and other flammable commodities.

Railroads are able to deny the right to load a car on their lines (OT-5 loading authority) and are able to use tariff rate increases to influence what cars are being operated. While the railroads maintain an obligation as a “common carrier,” they do not have an obligation to offer contract rates for any or all equipment. They can implement change under the guise of safety.

In this particular case, the core issue is that BNSF, having waited three years to begin this shift in strategy, has placed many of its customers in a serious economic bind. Between 2010 and 2015, tank railcar prices steadily increased. DOT 117J cars did not begin production in earnest until roughly 2014.

The CPC-1232s are the primary pool of tank railcars being selected for retrofit to the DOT 117R design. A retrofit can cost approximately $60,000 per car. While that might seem like a handsome sum, it allows shippers that made an investment in a soon-to-be-outmoded tank railcar to fully utilize the expected useful and interchange life of that car. Even with the retrofit cost, owners and operators of DOT 111A cars benefit by not having to purchase two completely new tank railcars in less than a decade.

If the railroads follow this initiative to completion, the middle generation of the DOT 111A, the 1232—whose value in the marketplace was already under stress—will have a limited customer base and opportunity for use operating as a DOT 11A or as a DOT 117R.

From the railroad perspective, the matter also has a critical economic component to it. Railroads carry a heavy liability when it comes to derailment remedy and reclamation. In the case of the Iowa derailment, there were evacuations and containment of crude leaked during the spill to keep it away from a public water supply. The line (again, compromised by flood waters) was out of service for a period of time, causing traffic delays or re-routing. The railroad has an obligation both corporately and morally to run the safest railroad possible. If there is a derailment-related crude oil explosion and fire, those costs increase exponentially.

Two industry sources indicated in post-derailment discussions that they did not blame BNSF for wanting to implement change requiring the highest-standard tank railcars on their lines. The railroads, it was explained, should not be responsible for bearing the risk of a sub-optimal asset that could cause them to increase their financial liability as a result of a derailment. One source, perennial Rail Equipment Finance Conference speaker Anthony “Tony” Hatch, commented that “CBR carries increased obvious risk and is a ‘capacity-suck’ in a time of generally tight capacity and other calls for it (e.g. intermodal and plastics). While CBR promises additional volumes, it seems to do so for a limited time as pipelines get planned and built. It is incumbent on railroads to price that risk appropriately. That means the railroads should demand the safest equipment and appropriately price that use of their capacity, since the business is short lived.”

So what is the issue here? There are actually five main points of concern:

Many industry observers may recall that in 2014, when the industry was debating the final specification that became the DOT 117R and the DOT 117J, the incremental difference/improvement in the Conditional Probability of Release (CPR, the metric by which crude releases from a tank railcar are evaluated) between the DOT 117R and the DOT 117J was small enough that the USDOT and Transport Canada were comfortable issuing HM-251, allowing for both options. Decisions that were made in this process and the studies that were done to validate the assumptions regarding the safety of the crude tank railcar of the future included input from the Railway Supply Institute Tank Car Committee, the American Petroleum Institute, the railroads and the AAR.

Companies and industry associations have long memories. Many will remember BNSF stating an intention to order 5,000 tank railcars, only to back away from that decision as the DOT began to issue HM-251. Many will also remember that the American Fuel & Petrochemical Manufacturers (APFM) sued BNSF regarding additional tariff penalties being placed on the DOT 111A 1232 design in early 2015.

It is difficult to establish a logical, goal-oriented pattern during these critical years. Spend some time at a tank car committee meeting and you will find an industry concerned about safety and responsible about self-policing. This is a complicated issue that would seem to require collaboration, rather than totalitarianism. Stay tuned.