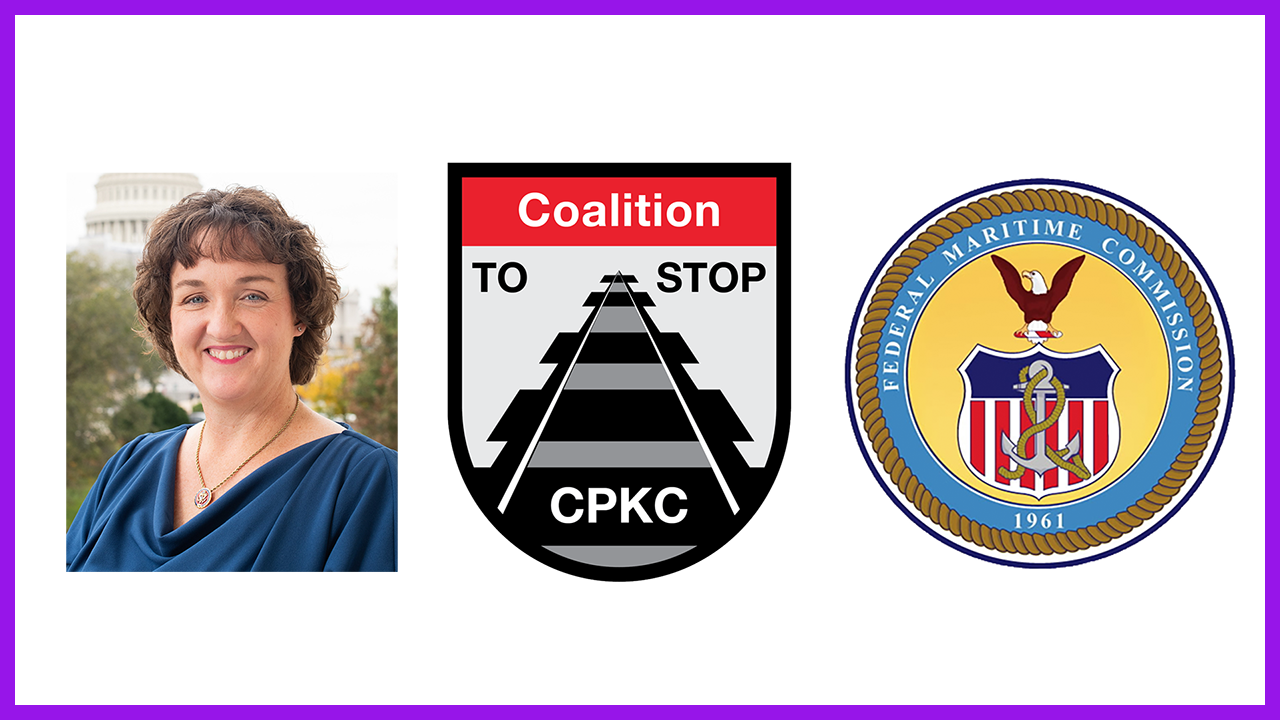 Recently, three filings with the Surface Transportation Board in opposition to the Canadian Pacific-Kansas City Southern merger application came across the transom that strike me as odd. One is from a California Congresswoman. The second (multiple letters, actually) is from a Chicago region group called The Coalition to Stop CPKC. The third—and strangest—is from three Federal Maritime Commissioners.

I’ll start with the Member of Congress, Katie Porter, a Democrat who represents California’s 45thCongressional District—roughly, the Irvine region west of Los Angeles, where BNSF and Union Pacific have extensive operations. Porter is a Yale and Harvard Law School graduate who in 2018 became the first Democrat elected to Congress in her district since 1953. According to her Wikipedia profile, “Porter has gained notice for her pointed questioning of officials during congressional hearings, often using visual aids such as whiteboards. She attracted attention for her questioning on the House Financial Services Committee. In March 2019, her questioning caught Wells Fargo CEO Tim Sloan contradicting what his corporate lawyers were arguing in court, in that statements he had previously made pledging transparency were ‘corporate puffery,’ according to documents lawyers submitted. In April 2019, Porter drew attention for her questioning of JPMorgan Chase CEO Jamie Dimon about how a Chase bank teller should make up a $567 shortfall between her monthly budget and her paycheck. In May 2019, she asked Housing and Urban Development Secretary Ben Carson about ‘REOs,’ real estate owned properties, which he confused with Oreo cookies. She also asked Consumer Financial Protection Bureau director Kathy Kraninger to solve basic math problems about annual percentage rates on payday loans, which Kraninger declined to do.”

In other words, if you’re going to testify in front of Porter, you’d better be prepared—as you should. And that’s the way the Oreo cookie crumbles …

On June 7, Porter filed a letter with the STB Office of Proceedings (downloadable below) asking the Board to “deny the proposed merger between the Canadian Pacific and Kansas City Southern railroads” because it “represents a grave threat to competition in the domestic rail industry, which is already highly consolidated. It would likely lead to job losses, harm to other industries reliant on railroads, and more fragility in American supply chain infrastructure. Under 49 U.S. Code §11324, the Surface Transportation Board may authorize a merger only if the merger is consistent with the public interest. This merger fails that test and must be blocked.”

Porter then goes on summarize the history of the U.S. rail industry from the late 19th century to the present day, interspersed with a detailed description of the proposed CPKC combination—based on comments filed in opposition. This summary includes rather lengthy sections on “Effects of Railroad Concentration on Shippers, Markets, and Industries,” “Effects on Service and Supply-Chain Disruptions,” “Effects on Employment” and “Use of a Voting Trust.”

A sample: “The use of voting trusts in mergers was originally invented by Standard Oil over a century ago in the Gilded Age. Their novel use facilitated numerous illegal horizontal acquisitions and underpinned Standard Oil’s quest to monopolize the oil industry. In this case, the use of a voting trust represents no less clear of an attempt to circumvent the STB’s authority and has in effect consummated the transaction before the Board can review how the deal will harm competition.”

Another sample: “Service disruptions have become more regular as railroads have used their market power as a shield to pursue Precision Scheduled Railroading (PSR) schemes—a Wall-Street fueled profit-maximization plan focused on driving down a railroad’s ‘operating ratio,’ (operating expenses as a percentage of revenue)—at the expense of capacity, service, and safety.”

Holy Monopoly Board Batman! What now?

Porter’s letter, which no doubt took a very long time for her (or her staff) to research and cherry-pick details suitable to her agenda, would make an excellent synopsis for a high school or college freshman U.S. History class. Does the STB really need a primer? Don’t the commissioners and their staffs already know the definition of operating ratio?

The definitive paragraphs are, as I see them:

“The proposed merger between CP and KCS would combine the sixth and seventh largest U.S. railroads by revenue. While CP and KCS connect directly at only one junction (Kansas City, Mo.), KCS connects with other railroads that compete directly with CP, and vice versa. The proposed transaction would give the merged firm additional leverage over competitors by allowing the merged firm to foreclose competition from other railroads, exert more extensive power over bottlenecks, and threaten the commercial viability of interchange rates. The combined firm would have the ability and a strong incentive to limit interchanges that facilitate alternative Class I carrier routes and instead favor its own long-haul routes. In particular, the merged rail carrier could significantly undermine competition at a critical international junction in Laredo, Texas, the gateway for 54% of all U.S.-Mexico rail traffic. This reduction in competition would harm many shippers that lack viable alternatives to transnational rail service via Laredo.”

“CP and KCS argue that since the proposed transaction is an end-to-end merger (one between two railroads competing in different service areas with little direct competition), a merger should not raise concerns about competition. However, end-to-end mergers provide railroads with an extensive menu of options to limit competition, from denials of service to competitors who need track or facility access to the cancellation of reciprocal switching agreements and closure of critical gateways. In addition to these harms to competition, these mergers also threaten shippers, essential services, and rail network reliability. The STB’s own guidelines specifically state that end-to-end mergers can degrade railroad competition, and that ‘any railroad combination’ risks the merged carrier exploiting its increased market power.”

My personal opinion: This is political pedantry, a gross exaggeration that deserves a “We got your letter. Thanks a bunch. We’ll add it to the pile” STB response. Frankly, this reads like a script for a Railroad Apocalypse Now Netflix series.

Katie Porter, who represents a district nearly 2,000 miles away from Chicagoland, refers to the Coalition, albeit without naming it, in her filing: “The proposed transaction also spells disaster for Americans living in the areas that would see vastly increased rail volume as a result. Eight Illinois towns (it’s now nine) representing 325,000 Americans located along the segment of the Elgin Subdivision—a Chicago commuter rail line utilized for freight by CP—have submitted comments to the STB highlighting the consequences of the near-tripling of rail traffic proposed in the region and strongly urging the transaction to be blocked. The towns investigated the costs required to mitigate the harms to their communities from the transaction, finding that the total represents $9.5 billion and as such will ‘dwarf any potential benefits to the merged railroad, the Coalition communities, or the Nation at large.’”

My diagnosis: This is a clear case of NIMBY Nervousness (also known as Freight Train Fear). Full disclosure: I live very close to the Conrail Shared Assets Southern Secondary, which sees 3-4 trains a week serving one customer, a lumber yard. Chesapeake & Delaware LLC, a New Jersey company that operates three short lines in my home state, is in negotiations with Conrail (and has filed with the STB) to assume operations of the Southern Secondary and other lightly used or even derelict branch lines. This could mean right-of-way upgrades, more rail-served businesses, more freight trains. I’m excited! Bring ’em on! How can I help?

“Specifically, the proposed merger will adversely impact U.S. ports and the primarily U.S.-based intermodal railway systems that serve our ports, and would disproportionately benefit Canadian ports and the primarily Canadian-based intermodal railway systems that service Canadian ports for transportation of U.S.-bound cargo. Canadian policies supporting Canadian port use per capita is financially much more significant than similar policies in the United States, contributing to erosion of U.S. port and railroad market share for U.S.-bound cargo.

“Further, we contend that while there might be economic benefits to certain shipper organizations and locations in the United States, that overall, there will be greater negative impacts relating to employment and long-term investment affecting intermodal shipments through U.S. ports.

“Finally, the macro-economic loss of intermodal market share of U.S.-bound containerized cargo shipments from U.S. ports would adversely harm U.S. longshore and rail labor, port trucking companies, U.S.-based intermodal railways servicing U.S. ports, warehousing and distribution centers servicing U.S. ports, and other entities that handle cargo bound through U.S. ports. Such economic losses will be far greater than any economic gain that might ensue as a result of a consolidation of the railroad systems of CP and KCS.”

This is, in my opinion, is nonsense, a symptom of a condition called Maritime Mendaciousness.

I guess when it comes to politics, it’s whatever floats your boat.