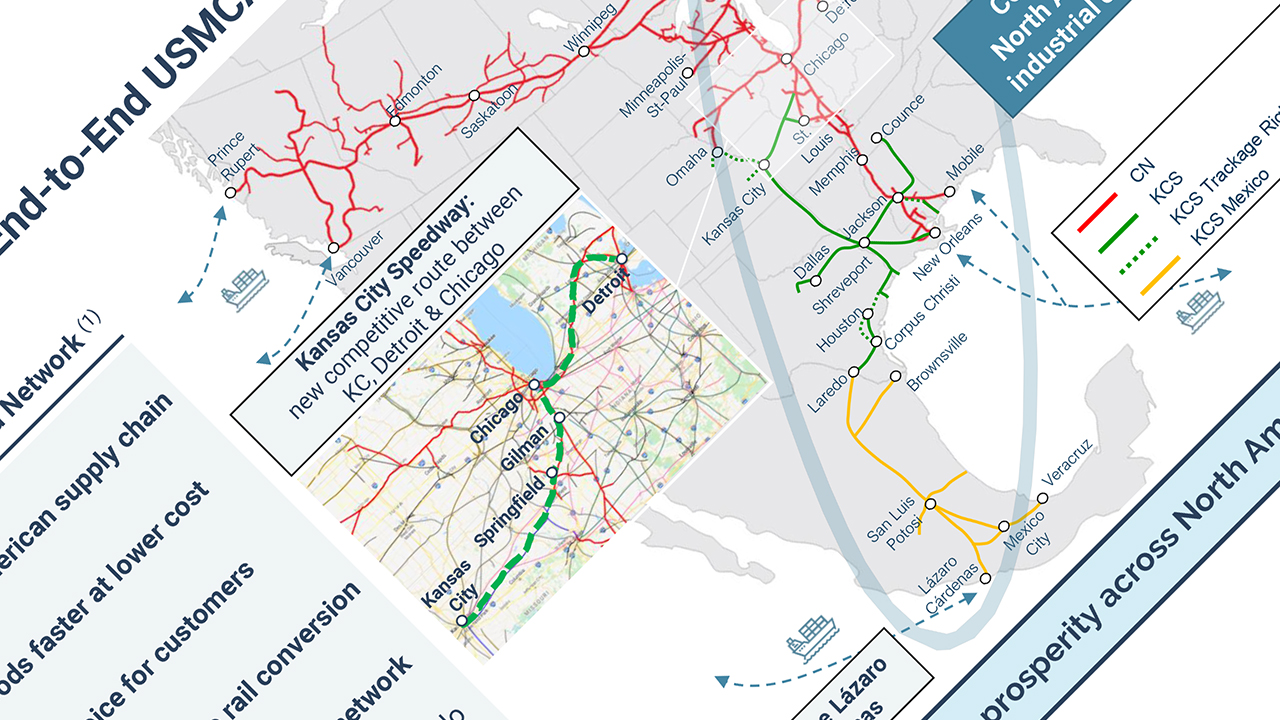 CN on April 21 submitted to the U.S. Surface Transportation Board a prefiling notification of its intent to file an application seeking authority to combine with Kansas City Southern “further to CN’s superior proposal for a cash-and-stock transaction valued at $33.7 billion, or $325 per share.”

“The Notice of Intent sets out CN’s commitment to proceeding under the STB’s current merger rules and assuring the STB and customers that CN will maintain seamless service and enhanced competition after combining the two end-to-end networks,” CN said. “The Notice also confirms that CN intends to seek approval of the voting trust in the coming days. STB approval of the voting trust would enable KCS shareholders to receive full payment of consideration under CN’s $325 per share proposal without having to await final STB approval of the transaction. CN’s plain vanilla voting trust is identical to the one already approved by KCS’ board of directors in its previously announced transaction, and CN believes that they are both equally likely to be approved by the STB.”

CN added that it “is confident that its proposed combination is in the public interest. Following the closing of the voting trust, CN welcomes the opportunity to participate in the STB process and provide a full forum for stakeholders to comment on the proposed transaction. CN is confident that it will be able to effectively address any reasonable remediation concerns and ensure rail customers and other stakeholders benefit from the proposed combination with KCS. That is why CN supports the STB reviewing this combination under the modern new rules, as opposed to seeking to have a combination with KCS reviewed under rules from four decades ago that have been opposed by virtually every other party to have filed before the STB.

“Together, CN and KCS would offer multiple interchanges and create greater choice and service options for customers of both companies. Customers will benefit from a faster, more direct and more efficient network of end-to-end single-line services from Mexico to the United States to Canada, with an enhanced ability to connect ports in the Atlantic, Pacific, and the Gulf of Mexico. The combined company would add more fluid, rapid and cost-efficient options across network points for customers such as Laredo, Texas; Detroit, Michigan; and Southern Ontario, Canada.”

CN claims that it and KCS combined would be fifth-largest among Class I railroads, out of six, “as measured by U.S. revenue and track-miles,” though it would actually be the third-largest, all measurements taken into account, including Canadian and Mexican operations. Both potential combinations, CP+KCS and CN+KCS, have been dubbed the “USMCA Railroad.”

CN noted that it “has a demonstrated track record in merging other railroads into a seamless network and is committed to keeping existing gateways open. Importantly, this rail and logistics network would also reduce traffic congestion and prevent thousands of tons of greenhouse gas emissions from entering the atmosphere every day.”

“Our proposal to KCS is simple,” said CN President and CEO Jean-Jacques Ruest. “We are providing greater and more certain value, and a clear path to closing. We have a better bid. We are a better railroad. We will be a better partner for KCS and the communities it serves. And we believe the STB and our customers will recognize that CN presents the best solution for the continued growth, development and prosperity of the North American economy. CN has made a superior proposal and is committed to satisfying the current STB merger rules. CN is confident that the STB will approve the voting trust, which will permit KCS shareholders to crystallize the value of its U.S. and Mexico franchise, and then permit the STB to undertake the careful review process it should take following the closing into the voting trust.”

Editor’s Note: “Prefiling” sounds a lot like “preboarding” for a flight, which the late, legendary comedian George Carlin called “getting on before you get on.” – William C. Vantuono