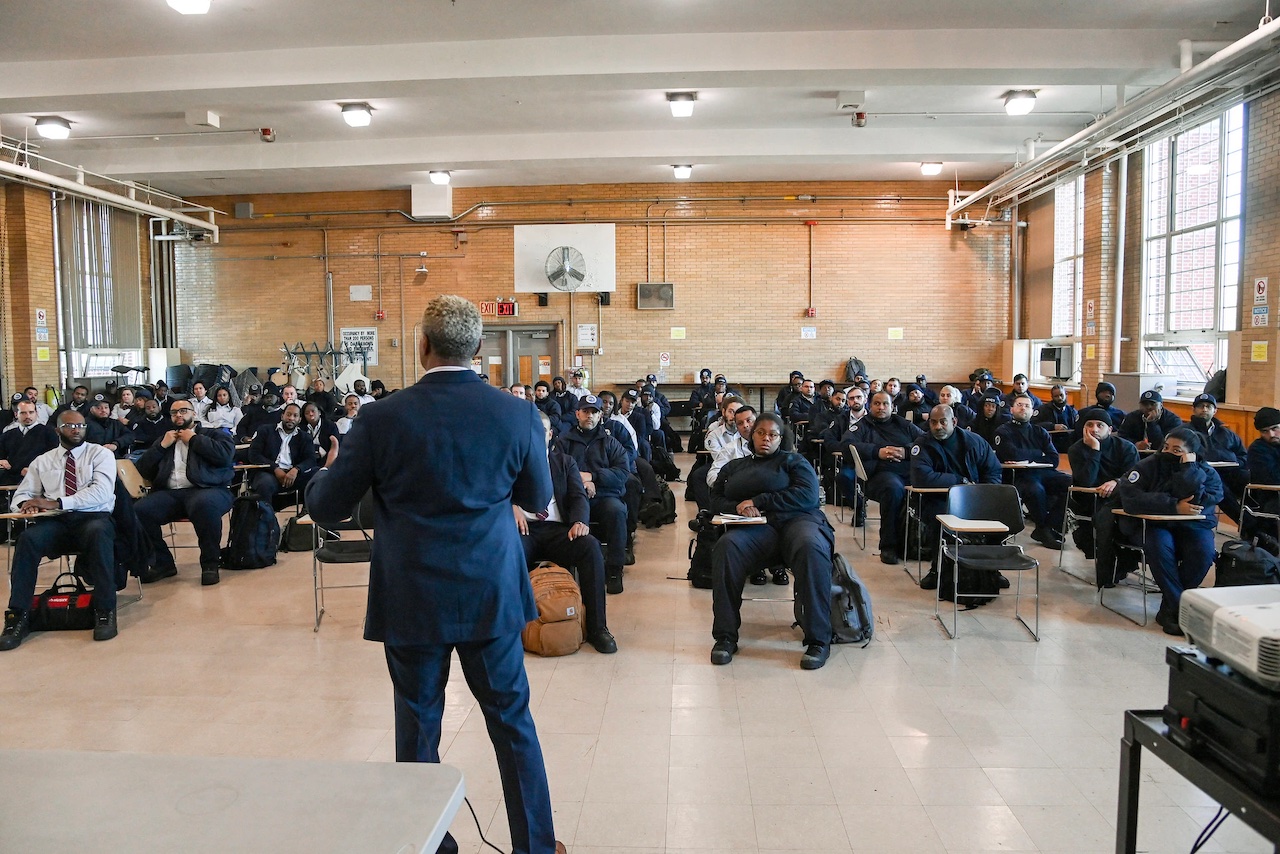 NYCT announced Nov. 21 the graduation of 84 new train operators and 10 new conductors, who will help the agency “tackle crew shortage challenges and bolster the frequency of subway service,” at the NYCT Learning Center in Brooklyn, following the successful completion of six months of intensive training that began in May 2022.

The graduation, MTA says, took place “days after subways set a weekend ridership record on Marathon Sunday, Nov. 6, carrying 2.11 million riders, surpassing the previous pandemic-era Sunday ridership record set on June 26, 2022, of 2.01 million, and 84% of the pre-pandemic baseline for the comparable second Sunday of November in 2019.”

“The best way to travel through New York City is on the subway, and NYCT is dedicated to increasing staffing levels to provide faster, better and more efficient service,” said NYCT President Richard Davey. “And the recent ridership records show we are moving in the right direction.”

“Building up the workforce remains a top initiative to provide better subway service for New Yorkers,” said NYCT Senior Vice President of Subways Demetrius Crichlow. “Whether riders are using mass transit to get to work, school, or to explore all the city has to offer this holiday season, they can count on this group of operators and conductors to get them where they need to go.”

More photos from the graduation are available here.

In honor of the museum’s exhibit “Reign of the Redbirds,” the Holiday Nostalgia Train will feature the “Train of Many Colors” and travel along a new route this year that includes operating along the 1 Line, making all local stops between Chambers Street and 137th Street-City College Street stations, from 10 a.m. to 5:30 p.m. on Nov. 27, Dec. 4, Dec. 11 and Dec. 18.

The Holiday Nostalgia Train departs Chambers Street Station on the 1 Line at:

The Holiday Nostalgia Train departs 137th Street Station on the 1 Line at:

The Holiday Nostalgia Train will make stops at:

In November, as part of the Powell St. Modernization Plan, BART installed new artwork on the station’s ceiling created by San Francisco artist Stephen Galloway and coordinated by the BART Art Program.

Titled “Elysium,” the artwork features an illuminated sky ringed by imagery of three of the historic buildings around the station entrance. “When you look up at ‘Elysium,’ it’s as if you’re emerging from the station onto bustling Market Street around you,” the agency said.

“The work itself is a large LED lightbox. The imagery is digitally printed onto film and the film is squished between two panes of glass like a sandwich,” Galloway said. Light from LEDs peeks through the somewhat translucent glass to illuminate the image.

Installing the artwork was challenging, according to Wahid Amiri, who managed the project. The piece is located at the former site of a breakroom and structure that held ticketing machines. All of that had to be removed, and the area had to be abated for hazardous materials, as well as cleaned and fireproofed. Once that was finished, electricians installed the wiring for the LED panel. Then the heavy lifting began, as the glass panels of the piece–all 13 of them–weighed about 150 pounds.

“The last thing we wanted was for that glass to be shattered,” he said.

Galloway spoke of the piece as helping to establish a “sense of place,” a multivalent construct that describes people’s connection to space. In Galloway’s phrasing, sense of place enables us to “lock in with the meaning of a space.”

“It’s getting people to both be aware but also feel good about what’s around them,” he said.

For Galloway, Powell St. Station is a central hub of urban activity and motion. It’s also the first experience of San Francisco many visitors have.

“I’m really trying to affect that first moment as people come off these trains for their first taste of San Francisco,” Galloway said.

To create the artwork itself, Galloway began by walking. He strolled the neighborhood around Powell St. for hours, covering about eight blocks by eight blocks in each direction, to “get a sense of what a person would feel and notice while ambling around the area.” Much of Galloway’s art considers nature, but around Powell St., the artist said he was “mostly inspired by the architecture.”

Once Galloway had a concept, he started taking hundreds of photographs of the buildings around Powell St. He brought those photos back to his studio, where he roughly collaged a composition and then created a digital graphic.

“It no longer has photographic detail at that point,” Galloway said. “It looks much more like dabs of color.”

According to BART, astute viewers will notice a not-so-subtle detail in the piece that pays homage to the original architecture of the station. The artwork has the illusion that it’s made not of glass, but the iconic raised “bubble tiles” found along the walls at Powell St. Station.

“There’s nothing like them,” Galloway said. “If you go to a tile store, you won’t see these.”

Galloway superimposed the pattern of the tiles, with their little bits of shadow, over the digital piece and voila–the illusion of raised tile. The creative decision, “an obvious homage to BART,” also references the history of mosaic, which Galloway called “a super important part of public art” that’s been used for more than 2,000 years.

“It just seemed like the right thing to do,” Galloway said.

In all, Galloway says he hopes the piece “encourages BART riders to look at their surroundings and, perhaps, reconsider the history and splendor of Market Street.”

He asks: “How can we do right by all that heritage?”

For Amiri, the station modernization will make Powell St. a “beautiful location for families to visit and take photos.”

“This just adds a layer of beautifying the station and making it a destination,” he said.

According to a report by the Washington Examiner, WMATA is launching a new gate prototype at the Fort Totten stop as the agency “works to find a final design that will prevent fare evasion.”

According to WMATA General Manager Randy Clarke, and as reported by the Washington Examiner, two protoypes have been installed at the Fort Totten stop, which serves the Red, Yellow and Green lines. “One design includes ‘blades’ with plexiglass half-circles on top of the gates, a usual spot for people to place their hands to hurdle over the gate. The other prototype is a ‘saloon door’ design with plexiglass barriers that are about 4 ½ feet high.”

At a board meeting last week, Clarke said that “these prototypes may not be the final design, and each has its pros and cons. While gates may prevent someone from jumping over, it could increase people ‘piggybacking’ off each other by walking right behind someone who pays.”

“There is never a perfect gate,” he said. “If we want to have a gate where there’ll never be fare evasion, that’s called a wall, and we will never run service,” said Clarke, who added that WMATA is “working extensively to make sure the gates do not violate any ADA requirements and safety regulations.”

According to the Washington Examiner report, riders can begin giving feedback on the prototypes early next year.

“The team has done a lot of great engineering work. We’re going to now watch and see the results of these and move forward,” said Clarke, who added that “fare evasion is a top concert among customers, shareholders and staff.

According to the Washington Examiner report, WMATA estimated that it lost $40 million in fiscal 2022 due to fare evasion, which is 22% of the next year’s budget gap and part of a nearly $185 million budget shortfall.

According to the Washington Examiner report, WMATA began in November its program of issuing fines “to those who attempt to ride Metrorail or Metrobus without paying after a warning period in October.” The program, according to the report, “allows the Metro Transit Police Department to issue citations to those who are caught evading fares in train stations and on buses, ticketing riders up to $50 for locations within Washington, D.C., and up to $100 for locations in Maryland and Virginia.”

According to the Washington Examiner report, “critics of fare evasion fines argue that it disproportionately affects low-income and black residents. After the Council of the District of Columbia voted to decriminalize fare evasion and made it a civil offense, transit police reports of evasion dramatically decreased. Police reported only 297 related citations or arrests in 2021, a 98% drop from the 15,000 that were recorded in 2017, according to police records.”

Clarke said “the idea is to make the system as fair as possible while also being ‘realistic’ that the Metro is a transit system that runs on fares.”

According to the Washington Examiner report, 35 citations have already been issued in November for fare evasion. “Metro police initially brought in more officers to stand in the stations, a visual that Clarke said has ‘reduced the chance of confrontation and force relating to fare evasion,’” according to the report.

“The number of police will be scaled down as the program evolves,” Clarke added.

“We’re trying to do this in the most humane [way]. We’re trying to avoid confrontation,” Clarke said. “But we have rules, and the rules have to be followed in the system.”

As part of its five-year sustainability plan, VIA Rail announced Nov. 24 that it is extending a pilot project, which tests the use of artificial intelligence (AI) in order to “reduce the Corporation’s fuel consumption and greenhouse gas emissions (GHG) produced from its rail operations.”

In collaboration with Transport Canada and Innovative Solutions Canada Testing Stream, VIA Rail originally started working in 2021 with a start-up company, RailVision Analytics, to test EcoRail, an AI-enabled software that “provides driving recommendations to locomotive engineers to reduce fuel consumption.”

According to VIA Rail, the initial six-month testing was completed with locomotive engineers in the Corporation’s simulators and confirmed a “potential reduction of up to 15% in fuel consumption and resulting GHG emissions.”

These positive preliminary results, VIA Rail says, prompted the Corporation to extend the project to test the application in real train operations.

“This AI pilot project perfectly exemplifies our determination to find new and different ways to reimagine the way Canadians travel from reservation to destination,” said VIA Rail Vice President of Railway Operations Michael Brankley. “I would like to thank Transport Canada for their support and collaboration and RailVision Analytics for accompanying us on our journey to contributing to a more sustainable future.”

According to VIA Rail, EcoRail “monitors the driving behavior between station stops to determine improvements that will allow for a reduction in fuel consumption.” The software, VIA Rail adds, analyzes several factors, such as equipment used, season and schedule, to “recommend the most fuel-effective train handling behavior without impacting travel time.”

VIA Rail, which unveiled earlier this year its five-year sustainability plan, said this pilot project is “a key endeavor that will contribute to one of the Corporation’s goals of reducing its environmental footprint.”