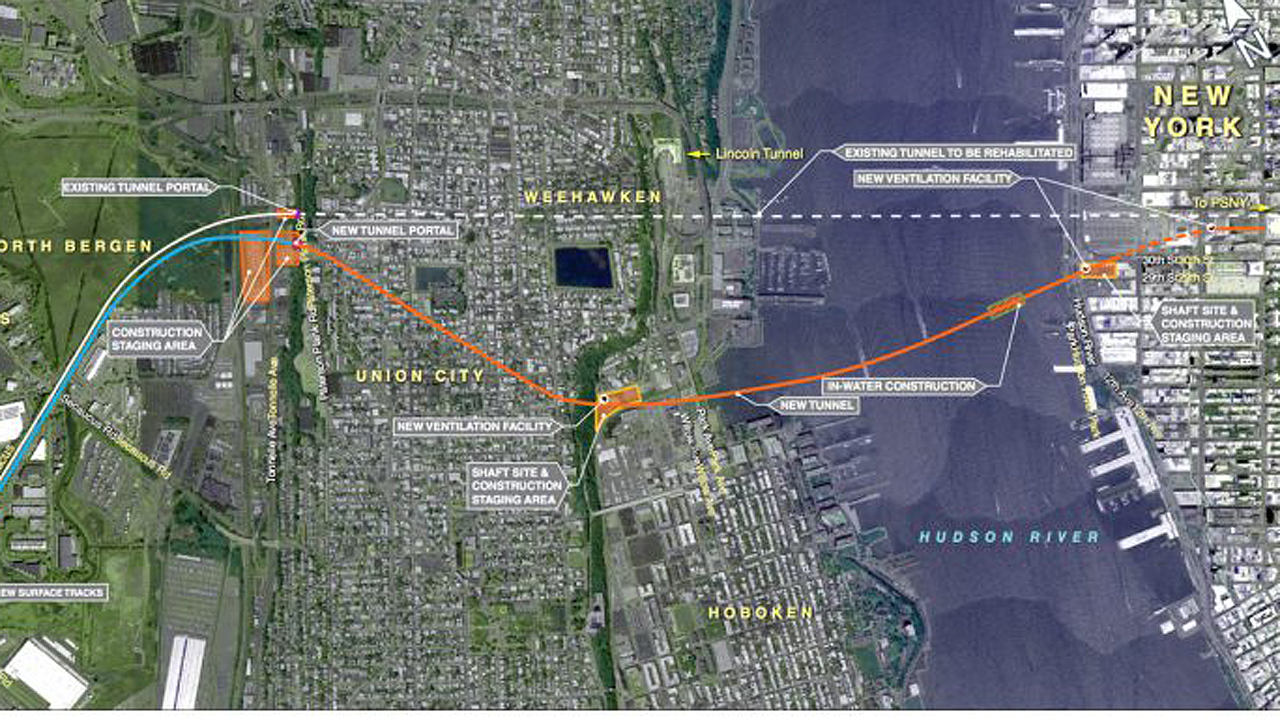 The Federal Transit Administration (FTA) released ratings March 15 for infrastructure projects throughout the U.S. Those ratings determine what funding sources are available to any given project. According to the Associated Press (AP), the agency rated the Hudson River tunnel project “medium-low,” which gives the project the same rating the FTA gave it months ago.

The tunnel project partners—New Jersey Transit (NJT), the Port Authority of New York and New Jersey (PANYNJ) and Amtrak—have been working to secure such grants. The project is part of the Northeast Corridor (NEC) Gateway Program, which the FTA defines as “several strategic rail infrastructure investments intended to improve current service and create new capacity.” PANYNJ, working with the Gateway Program Development Corporation (GPDC), NJT and Amtrak, proposed the construction of a new two-track tunnel along the Northeast Corridor from the Bergen Palisades in New Jersey to Manhattan that would directly serve Penn Station in New York. The project includes three primary elements: the Hudson Yards right-of-way preservation project, the Hudson Tunnel, and rehabilitation and modernization of Amtrak’s existing North River tunnels, opened in 1910 by the Pennsylvania Railroad as part of its massive New York Improvements Program.

Amtrak since the mid-1970s has owned the existing 109-year old tunnels, with NJ Transit and Amtrak operating about 450 trains  each weekday through them. FTA documents explain that, in addition to safety and reliability concerns, the project is also intended to preserve the current functionality of Amtrak’s NEC service and NJ Transit’s commuter rail service.

New York and New Jersey Democratic congressional delegations have also suggested that the Trump Administration may be intentionally holding up tunnel funding for political purposes. At the same time, the U.S. Department of Transportation (DOT) has said the project requires additional financial commitments from both states.

“The U.S. DOT is further delaying this critical infrastructure project and putting the region and the entire national economy in jeopardy,” said New York Gov. Andrew Cuomo in a statement. “Only a dysfunctional Washington could reject $6 billion in state funding to rebuild federally owned tunnels, which are in dire condition.”

New Jersey and New York both intend to rely on long-term federal loans to fund 50% of the project, which AP reports would be between $6 billion and $7 billion. The states would expect the federal government to finance the other half of the costs with grants.

According to AP, USDOT believes the states are asking for too much federal funding, and on March 15 said that the most recent financial plan proposed by project organizers “did not address the key concerns identified by FTA in last’s year rating.”

The existing tunnels operate at peak capacity to accommodate nearly 200,000 passengers daily. The tunnels have an aging electrical system and crumbling concrete walls that were damaged during Superstorm Sandy in 2012. This damage led Amtrak to estimate that one of the two tubes could fail roughly within the next decade. Such a tunnel failure could reduce peak service by 75% and affect the rail corridor between Boston and Washington, D.C.

Last year, RT&S reported that animations had been released depicting what the completed tunnel project might look like.

Commented one passenger rail advocate: “We are heading for another fiasco like the 1916 railroad breakdown that led to passage of the first federal highway program and the 1952-1961 thousand-fatality crash-a-thon that led to formation of the FAA and a uniform system of federal air traffic control. One of the Hudson River tunnels will fail; the Northeast economy will choke; it will all be on Trump; and a later Administration will have to pick up the pieces and build the new tunnels.”

Gateway: Ball is in Trump’s (and Chao’s) court—and they haven’t picked it up