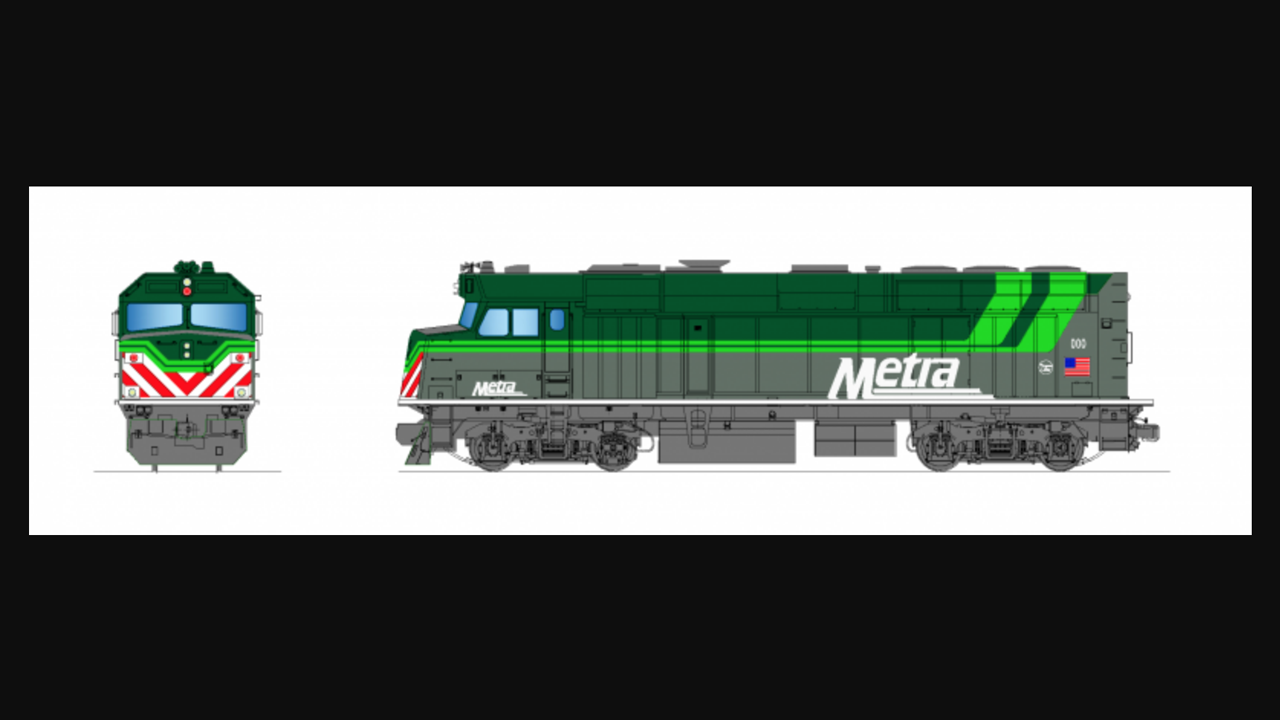 Respondents to Metra’s RFP for battery-powered locomotives can chose to paint them in a “green version of Metra’s paint scheme” (per the conceptual illustrations, above) to indicate the green technology.

The move to zero-emission locomotives is picking up electrons—not steam—with Metra’s announcement that it will issue a Request for Proposals (RFP) challenging manufacturers to convert three of its older F40PH-3 diesels to battery power.

This follows work by Wabtec and BNSF on a battery-electric locomotive and by Canadian Pacific (CP) on a hydrogen fuel cell (HFC)-powered locomotive, both for freight rail service. (And MTA Long Island Rail Road announced April 19 that it would test a prototype battery-electric multiple unit that operates on third-rail power or batteries along the 13-mile, non-electrified Oyster Bay Branch in New York.)

Metra, the Chicago-based commuter rail agency, reported April 21 that its Board approved the RFP, which will be released “in the coming days.” A contract is slated for award this fall, with the first zero-emission, battery-powered locomotives delivered about 30 months later.

Metra requires the new locomotives to be:

• Fully compatible with the agency’s existing railcars and diesel power.
• Capable of operating on any Metra line and of hauling two- to 11-car trains.
• Capable of providing “a safe and comfortable ride at all speeds up to the maximum speed of 79 mph.”

In addition, the batteries used must “also power onboard systems, such as lighting, intercoms and HVAC,” and the locomotives “may be painted in a green version of Metra’s paint scheme (per the conceptual illustrations) to indicate the green technology,” Metra said.

The Rock Island Line’s Beverly Branch “is a likely candidate” for operating a battery-powered train, due to its shorter length allowing for several trips before recharging, Metra said. But to help the agency determine if it will proceed with a purchase as well as where and how the locomotives will used, RFP respondents must also address: operating distance, recharge time, operations in Chicago weather, life-cycle maintenance costs, and supporting infrastructure.

“This proposal could be game-changing,” Metra Executive Director/CEO Jim Derwinski said. “We have been monitoring the development of this technology for several years and believe the time is right to work with the industry and set a path for a brighter and cleaner future. With the Biden Administration pushing for greener energy, we believe this is the perfect time to pursue this course of action. As we emerge from the fog of this pandemic, we see this as an opportunity to transform Metra, and to become a cleaner partner in the region. And this is only the first step.”

In related developments, Metra is also seeking to purchase six new low-emission switchers, including a zero-emission, electric-powered unit, and is acquiring 15 remanufactured locomotives that meet the EPA’s Tier 3 emissions standards, the first of which is slated for delivery in early 2022.