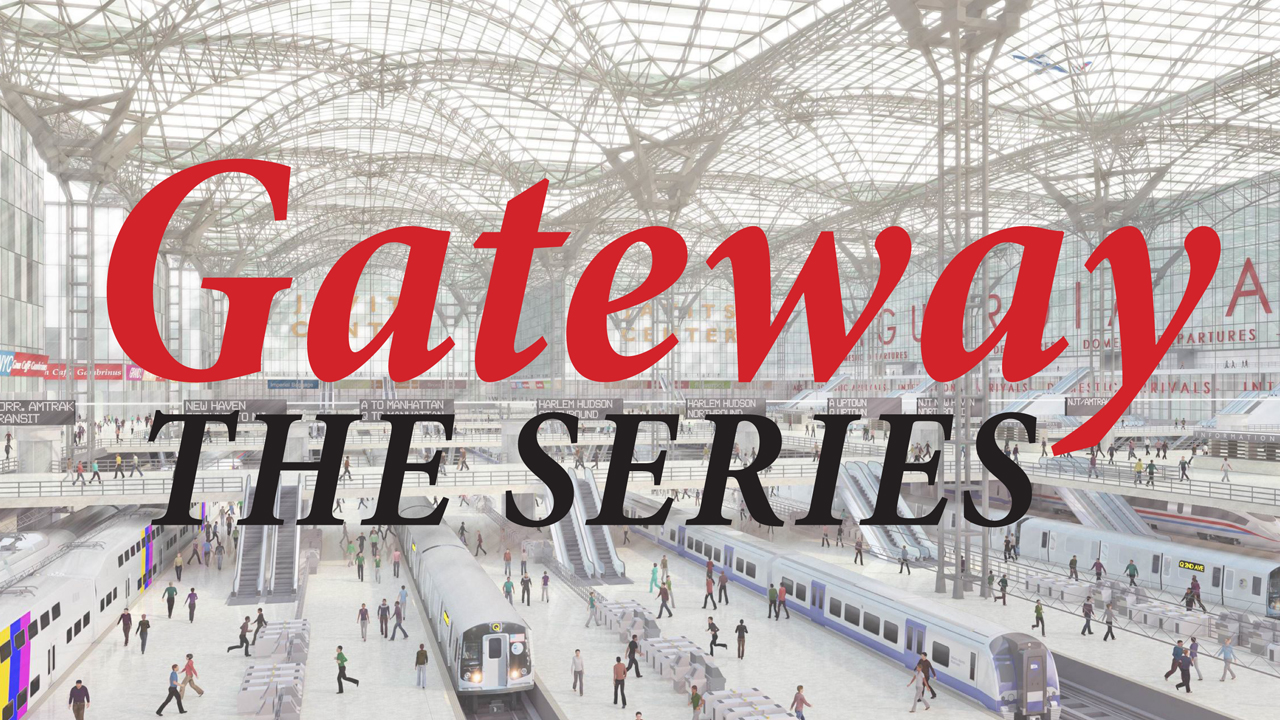 President Biden and Secretary Buttigieg are pushing infrastructure projects as part of the solution to the economic doldrums in which many Americans find themselves as a result of the COVID-19 virus and the shutdowns that occurred in its wake. That includes newly found support at the U.S. Department of Transportation.

May 28 was a day of celebration for Gateway, regarding its efforts to build new tunnels before rehabilitating the existing North River Tunnels, opened in 1910 and in need of overhaul. The Hudson Tunnel Project component received an important approval toward funding that the Trump Administration had opposed and the Biden Administration is now supporting. The Federal Railroad Administration (FRA) and Federal Transit Administration (FTA) jointly issued a Final Environment Impact Statement (EIS) and Record of Decision (ROD) “to advance the Hudson Tunnel Project toward final design and construction.” The existing North River Tunnels would be rehabilitated “once the new tunnel is complete.”

However, the FTA threw the project a curve. In order to be eligible for federal funds, projects must receive a “High” or “Medium-High” rating. That sort of rating had been elusive for Gateway projects like the Hudson Tunnel Project or Portal North Bridge, and the latest FTA report came as a surprise to some. The FTA’s Annual Report on Funding Recommendations for FY22, released May 28, did not give the Hudson Tunnel Project the Medium-High rating that Gateway officials had expected. Instead, the project was listed as “Under Review.”

FTA’s reason: “The state legislation creating the GDC (Gateway Development Commission) outlines steps that must be taken to fully operationalize the organization, including developing and adopting bylaws and voting procedures, procurement procedures, financial procedures and funding sources, hiring procedures, civil rights procedures, and other items. Completion of these steps influences FTA determinations on legal, technical, and financial capacity and the project rating.” Thus, the FTA has not provided a rating and has instead indicated items are Under Review.

This move seems unusual on its face, because the legislation that changed the Gateway organization from a “Corporation” to a “Commission” established the altered body to receive grants like the one for which Gateway was applying to the FTA in the first place. It was enabling legislation, and the structure was similar to the Port Authority of New York and New Jersey, the century-old bi-state agency after which the GDC was modeled, at least to some extent.

The change for the Hudson Tunnel Project was a new grant-receiving agency designed to facilitate and maybe expedite the grant process. The explanatory notation on the FTA document said: “In March 2021, the Gateway Development Commission held its first meeting, officially selected its co-chair leadership, and is now in the process of building out its organization. The GDC is expected to transition into the project sponsor role to lead the project, which may affect project details that influence the rating.”

The ROD shows that the FTA is now more favorably disposed toward the Gateway Program than it had been under the Trump Administration. Still, the rating of Under Review is problematic.

Throughout this series, I have questioned the cost-effectiveness of the entire Gateway Program, which is now estimated to cost $34 billion. Very few have argued against improving passenger rail infrastructure in the region covered by the Gateway Program. Nonetheless, is all of the proposed construction cost-effective, or even necessary, given the recent changes resulting from the COVID-19 pandemic?

The world of New York and New Jersey is a political one, where the paramount consideration of many decision-makers of consequence is their short-term goal of getting re-elected. That includes “bringing home the bacon” for their constituents, even though opponents often use a word for a different cut from the same animal: pork.

Trump did not like spending money to benefit states like New York and New Jersey, presumably because they are largely Democratis states—even though he has amassed a personal fortune developing real estate in both states. There is also no love lost between Trump and Senate Majority Leader Chuck Schumer, a New Yorker. Schumer has always vigorously supported the Gateway Program, and Transportation Secretary Buttigieg wants to spend plenty of money on transportation infrastructure.

From a post-COVID perspective, who needs new rail infrastructure, how much can the region afford to build, and what other mobility improvements could be sacrificed or postponed to pay for Gateway?

Since the virus struck, transit ridership patterns have changed. Historians may look back on this era and note that rail commuting into Manhattan hit an all-time peak in February 2020, before plummeting up to 95% as the pandemic that eventually killed more than 600,000 Americans took hold. Suffice to say that it does not seem likely that as many commuters will go into Midtown Manhattan to get to their offices in time for the beginning of the traditional business day, five days a week, as had done so before the virus hit. Some employees will return to five-day-a-week commuting; others undoubtedly will not.

New Jersey Transit  has returned to its pre-COVID train schedules. Early-morning trains into New York Penn Station—arrivals from 7:50 until 8:50—the FTA’s measure for peak-hour capacity, are among the emptiest in the system. Midday and weekend ridership are picking up, and many “essential” workers are commuting from Newark and nearby places to worksites further out on NJT lines.

This change matters, because NJT has claimed in its pursuit of funding for the Portal North Bridge project that it needs a new bridge to expand capacity for peak-hour commuters. With fewer such riders, that argument doesn’t hold as much water. Too, there would be less stress on tunnel capacity. If it would cost significantly less to rehabilitate the existing tunnels first and then build one new tube, rather than two, such infrastructure could suffice for decades. That could satisfy the region’s mobility needs, as well as those of Amtrak riders, while saving billions of dollars.

Recent changes in commuting could also affect Penn Station New York. With fewer peak-hour commuters and service spread more evenly throughout the day, peak-commuting capacity could cease to be as big problem. New York Gov. Andrew Cuomo has proposed a large-scale Penn Station expansion with his Empire Station plan, but it is currently unclear if the additional capacity will be needed. Developers are proposing a ring of eight 80-story buildings in the Penn Station area, but it does not appear likely that such development would be necessary or desirable if some employees continue to work from home, at least some days of the week.

Even if most of the pre-COVID commuters were to return to their traditional five-day-a-week routine, capacity at Penn Station may no longer be as constrained, due to a major project on Manhattan’s East Side. Cuomo said as much, albeit indirectly, on May 27, when he celebrated the completion of construction on East Side Access for the Long Island Rail Road (LIRR). East Side Access “reduces dramatically the number of trains going into Penn, which first of all is a good thing because Grand Central is a much more pleasant experience than Penn right now until we do the new Penn,” he said. “But reducing the number of trains going into Penn is very important because one of the major problems we have at Penn is track capacity. We don’t have enough track capacity for Amtrak and Metro North as it is.”

At least in theory, the relocation of a number of LIRR trains to the East Side Access facility will make more capacity available at Penn Station. NJT could use some of it, and the rest could go to new Metro-North services on the Hell Gate Bridge route toward Westchester and Connecticut, and on the West Side Connection toward the Hudson Line. Between fewer LIRR trains and fewer “peak-hour” seats needed on NJT, Penn Station may have enough capacity for the foreseeable future without the need for major expansion, no matter how hard Cuomo pushes for it.

How much infrastructure can the region afford? These are grim times for millions, including many people in New York City and New Jersey. The COVID-19 relief legislation from Congress has kept many Americans afloat during the emergency, and it has kept Amtrak and transit going, too. But this may be the end of federal operating assistance for transit. Republicans in Congress are threatening to remove it from pending infrastructure bills. Democrats will need substantial Republican support, which seems unlikely, if not impossible.

With decreased ridership and the drop in revenue for the region’s transit providers, New York and New Jersey might not be able to afford all the infrastructure that the Gateway Program would build. With so many demands on limited government resources, both states face hard decisions. It may be time for them to reckon with future demand and decide exactly which infrastructure projects will be needed and which will not be cost-effective.

One of the basic concepts of economics is Opportunity Cost. If you spend your money on one set of products or services, you can’t afford a different set because you already spent your available funds. Whatever benefit you might have derived from the products or services that you did not purchase is the cost associated with purchasing something else. That is the Opportunity Cost.

Case in point: In 2000, NJT produced a set of projects collectively called “Vision 2020,” with the intent of completing all of them by last year. There were 36 projects listed, many of which would have enhanced mobility in the Garden State by expanding NJT’s network of commuter and light rail lines. None of those projects that were not already under construction at the time of the report were ever built. Some are still under discussion today, but not a single one has been completed and opened for service.

In the case of the Gateway Program, the latest cost estimate is $34 billion—roughly 2½ times as much as the FTA’s highest estimate of the ARC (Access to the Region’s Core) Project in 2010, when former New Jersey Gov. Chris Christie terminated it, mainly because he considered it too expensive. Since that time, costs have increased sharply through inflation, which indicates that Gateway is less affordable than ARC.

Money is scarce, and spending decisions must be made wisely, in accordance with the needs of the people for whom government-sponsored projects are built. In the case of transit infrastructure, that means the riders and the taxpayers. Concerning Gateway, they are the riders and taxpayers of New Jersey and New York, who need and deserve the best mobility they can afford. Given recent events, it will take some time to find out how ridership patterns develop during the next few years, which will indicate exactly what infrastructure will be needed to serve the riders of the foreseeable future.