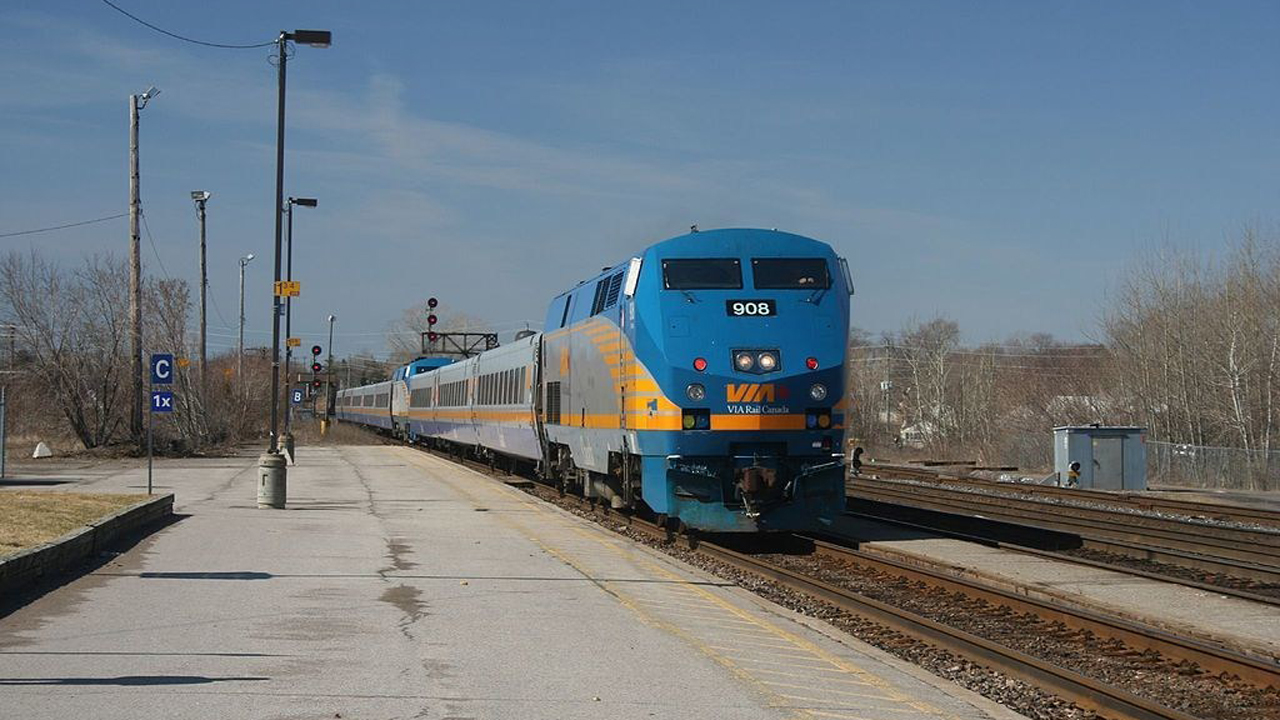 VIA Rail train at the Belleville Station. (CNW Group/Unifor)

VIA Rail Canada’s concept to link Quebec City, Montreal, Ottawa and Toronto with a dedicated and electrified main line snapped together from bits of legacy rights-of-way was first detailed by then VIA Rail CEO Yves Desjardins-Siciliano to Railway Age in 2015. Since then, VIA Rail owner Transport Canada, through a public-relations strategy, has revealed just enough in the way of money and maps to keep railway suppliers awake in their seats.

Different this time is a commitment to invite actual bids later this year for some $4.8 billion (C$6 billion) worth of roadbed, track, catenary, signaling and trainsets. A solicitation for service “delivery models” evokes VIA Rail’s original vision in which the infrastructure and trains would be publicly owned, while train operations would be franchised to independent operators—much like the hybrid system in the United Kingdom that mostly collapsed in the pandemic lockdown.

Boldly obvious in the rising temperature of Transport Canada’s HFR routine is the intention of Prime Minister Justin Trudeau to call an election this autumn, riding a wavelet of approval for a successful vaccination rollout and the failure of his unremarkable rivals to erode the government’s poll numbers. The choice of Trois-Rivières for the formal announcement was not only because the small French-speaking city would enjoy the return of regular passenger service. It is notably a parliamentary seat that Trudeau’s Liberals are determined to win back from Quebec’s perennial nationalist faction.

The HFR scheme would see conventional trainsets operating at speeds up to 124 mph (200 kph) on new and existing track north of the CN main lines that VIA Rail now uses between Quebec City and Toronto. (Reduced local service would continue on the CN lines to serve the existing station stops.)

The current proposed route map (above) shows VIA Rail would continue to depend on CN rail traffic control between Montreal Central Station and the Les Coteaux junction with VIA Rail’s own ex-Canadian Pacific main line to Ottawa. Another critical bit of cooperation will be needed to slot the new trains through the Mont-Royal tunnel owned by the new light rail commuter system Réseau express métropolitain (REM) due to start running driverless trains next year. Also needed is a track-sharing agreement with Ontario’s Toronto-centric Metrolinx commuter network that operates Union Station. In all, not quite a fully dedicated intercity passenger line, but close.

Another almost-there feature is electrification, which Transport Canada says will cover 90% of the route, reflecting pre-existing realities in and out of Montreal and Toronto. Siemens Mobility looks like the odds-on favorite favorite as rolling stock provider, as it delivers 32 trainsets to replace VIA Rail’s existing fleet. With hybrid Charger locomotives at either end, the bi-directional trains will run either on direct power from catenary or on electricity generated onboard from Tier 4 Cummins QSK95 diesel engines. The new dedicated line was already front-of-mind in 2018 when VIA Rail selected Siemens for new motive power. Expect an extension of that order for the new HFR service. (Amtrak ordered 73 similar trainsets from Siemens earlier this month.)

Whether the traveling public will respond to faster, more frequent trains in a post-pandemic world will be the critical reveal in VIA Rail’s HFR plans.

Red-over-green for VIA Rail’s high-frequency corridor