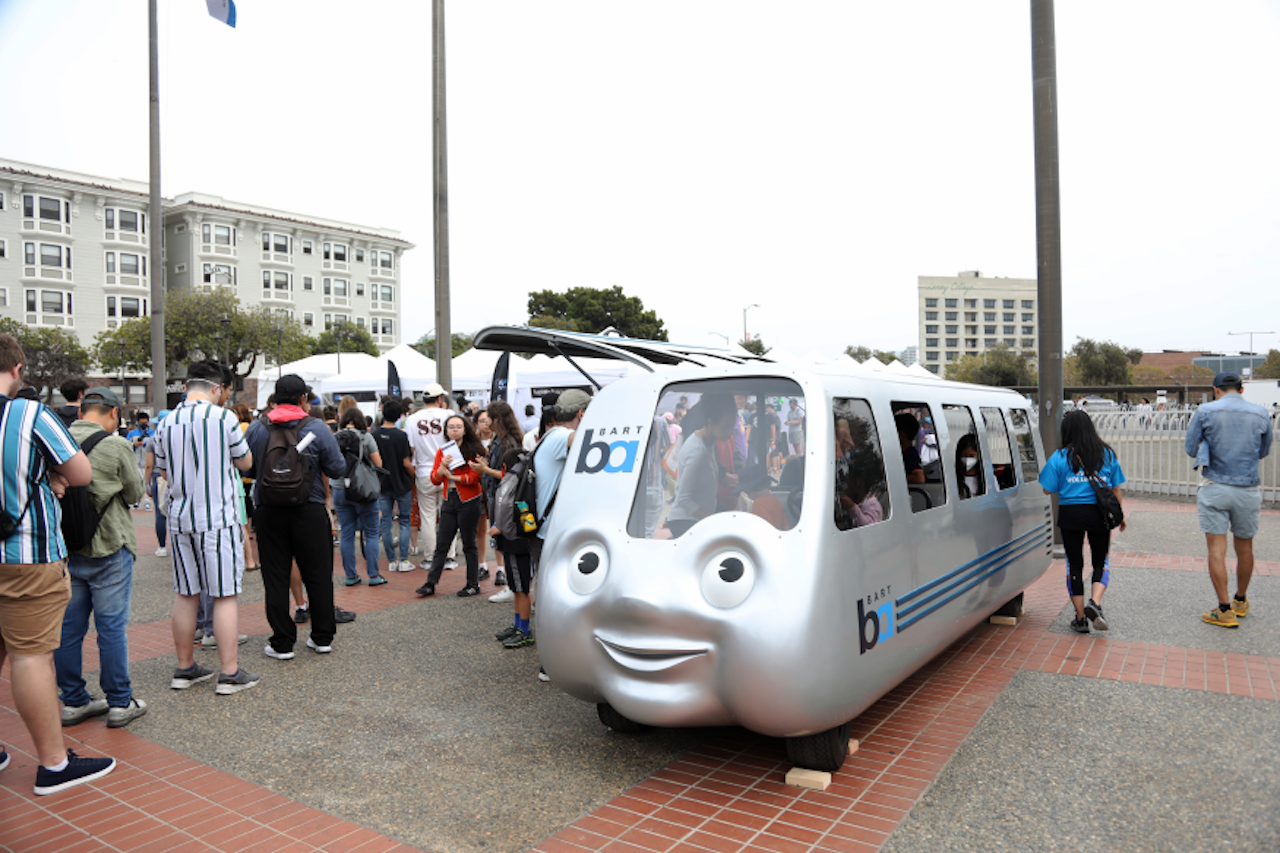 The BARTmobile was a "boon for photos" at BART's 50th anniversary celebration.

On Saturday, Sept. 10, BART celebrated its 50th anniversary with a celebration and family fun festival at Lake Merritt Station and Plaza. Per initial estimates, more than 2,500 people–among them, BART employees, BART retirees and members of the public–attended the celebration, partaking in the many photo opportunities (the BARTmobile’s smiling face plastered social media that day), playing mini golf on the plaza, snacking on eats from the food trucks, and jamming out to the variety of live music acts that graced the stage with their different styles.

Around noon, hundreds gathered for speeches from public officials, including recorded remarks by Speaker of the House Nancy Pelosi and U.S. Secretary of Transportation Pete Buttigieg.

Between speeches, speakers pulled items from a BART time capsule buried in 1992 for BART’s 20th anniversary. (You can find the full catalogue of items found in the time capsule here.) They also paused to place an item in BART’s new time capsule, which will be opened in 25 years on BART’s 75th anniversary of operation.

You can read more about the celebration here.

The new schedule is loaded into BART’s trip planning tools and PDF timetables can be found here.

Improvements at a glance:

BART’s Manager of Scheduling and Planning John FitzGibbon explained in a podcast on Sept. 2 how “new software has transformed what used to be the transit equivalent of sausage making into a coordinated symphony that has the prospect to save valuable time for thousands of riders.”

A link to the podcast can be found here.

DART announced on Sept. 12 that it has partnered with Assurance Wireless to offer free cell phone service and a free cell phone to eligible riders who are currently enrolled in a qualifying federal or state assistance program. Participants can also receive a Discount GoPass® Tap Card, with a 50% discount on the regular price of a DART pass, when attending one of several upcoming events.

DART says riders may qualify for the Affordable Connectivity Program (ACP), a government program that reduces the customer’s broadband internet access service bill, if they participate in Medicaid; the Supplemental Nutrition Assistance Program (SNAP), or the Special Supplemental Nutrition Program for Women, Infants and Children (WIC).

All new and current DART riders who participate in any of the following programs are now eligible for DART services at half the fare:

Online registration is available at DART.org/TapForHalf. Discount Tap Cards can be used on any DART bus or light rail, including Trinity Railway Express (TRE) between EBJ Union Station and CentrePort/DFW Station.

To establish eligibility for a free cell phone, DART says riders should bring proof of participation in qualifying programs (supporting documentation) to the event. Documentation must include full name and address and be dated to show current participation.

SacRT recently announced that it is developing a new brand identity and logo as part of its long-term marketing strategy in preparation for the arrival of the new low-floor light rail vehicles (LRVs) currently in production. This visual overhaul is expected to take place during late 2022 into mid-2023.

The goal of the project, the agency says, is to “modernize SacRT’s brand and increase visibility by helping riders and community members identify its vehicles and all the services it provides.”

During the project, the SacRT team says it will be doing outreach to the community for their input. The SacRT communications team will be providing a dedicated project page on the agency’s website to track development, include links to online surveys and provide general project updates.

WMATA announced that Washington Spirit fans can now travel to games with a new commemorative Metro SmarTrip® card celebrating the team’s NWSL championship. The card is available in selected stations and features an image of the team hoisting the championship trophy after the title-winning game.

The limited-edition cards are being sold at Navy Yard, Waterfront and Gallery Place stations in specially marked fare machines, arriving just in time, WMATA says, for soccer fans headed to the game on Saturday, Sept. 17 at Audi Field against the NJ/NY Gotham FC.

“We are excited to honor the Spirit, reigning NWSL champs, with this commemorative card. The Spirit’s title run continues the winning tradition in the District of Champions,” said WMATA General Manager/CEO Randy Clarke. “Metro is proud to support the team and fans getting to and from games.”

According to WMATA, the agency has produced 10,000 commemorative cards, available at the designated stations only on a first come-first serve basis. Each card costs $2, in addition to the fare value.

“We are honored to partner with Metro in recognition of the Spirit’s first championship title,” said Jonna Valente, Spirit VP of Communications. “These commemorative cards celebrate that incredible win for players and fans alike.”

Spirit fans can join starting midfielder Anna Heilferty, a native of the DC region and the first-ever Ambassador for Sustainable DC, and Clarke on Tuesday, Sept. 13 at 4 p.m. at the Gallery Place Station for a meet and greet and to get their championship cards.

The initiative’s focus on environmentalism and sustainability goes together, WMATA says, with the agency’s commitment to providing sustainable transportation.

The Spirit worked with WMATA to design the card for the start of the NWSL season; however, the SmarTrip cards were delayed due to supply chain issues related to the pandemic, according to the agency.

Earlier this year, WMATA also released a limited-edition SmarTrip card to commemorate the Mystics’ 2019 Women’s National Basketball Association Title. The championship cards were released to kick off the Mystics’ WNBA season after the pandemic-limited games and attendance during the 2020 and 2021 seasons.