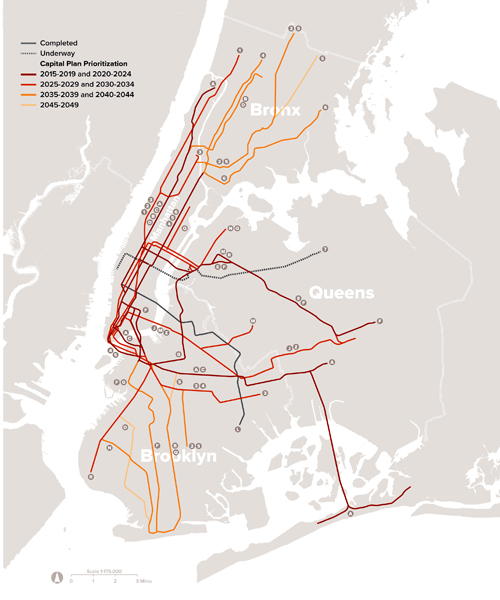 The QBL , which incorporates portions of the E, F, M and R lines, is one of the busiest and longest subway lines, in terms of track-miles, on the NYCT system. The Siemens share of the contract is $156.2 million; the Thales share is $49.6 million.

Siemens is supplying its radio-communications-based Trainguard MT CBTC technology for QBL West Phase 1. The contract includes onboard equipment for 305 of 309 four-or five-car R160 units, and wayside signaling and train control technology (zone controllers) at 7 of 8 interlockings. NYCT employees will install the onboard equipment on 301 of the 309 units.

With a length of around 27 track-miles, the QBL is the second-longest line on the NYCT rapid transit network. It has 25 stations and stretches from Jamaica Station in the Borough of Queens to Manhattan. With a daily volume of more than 250,000 passengers, it is one of the most heavily used lines on the NYCT network, which carries more than 5.5 million daily passengers.

Prior to receiving the QBL West Phase 1 contract, Siemens successfully installed CBTC on MTA’s Canarsie “L” line that operates from Chelsea (Manhattan), through Williamsburg to Canarsie (Brooklyn). Also equipped with Trainguard MT, the Canarsie Line has been running in full ATO (automatic train operation) mode since 2009. NYCT’s Flushing/No. 7 Line (including the extension to 34th Street and 11th Avenue) is currently undergoing installation of a Thales-supplied system and is scheduled for completion in 2017. QBL West Phase 1 will be the third NYCT line to be equipped with CBTC.

CBTC will be installed on local and express tracks serving the E, F, M and R lines from north of the Kew Gardens/Union Tpke. E/F station to north of the 47-50 Sts./Rockefeller Center station on the F/M Lines and south of the 50 St. C/E station. It is the first phase in a project that will ultimately update the signaling and train control system for the entire Queens Boulevard Line. QBL West Phase 1 represents a change from MTA’s other CBTC projects, which have been installed on single subway lines such as the L and 7. QBL West Phase 1 encompasses four subway lines with multiple train overlays.

Design work on QBL West Phase 1 is estimated to begin later in 2015, with major installation work estimated to start in mid-2017. Once complete, NYCT says it will be able “to run more frequent subway service with fewer delays, which will be a major benefit to customers who commute to some of Queens’ most populated neighborhoods, major commercial destinations, and areas in Central Queens that are undergoing significant residential and commercial development. On the L Line, ridership has increased by 27% since CBTC was installed; capacity also is expected to increase on the 7 Line once CBTC becomes operational in 2017.”

“CBTC is a vital part of our plan to address issues of overcrowding, record ridership and service delays,” said MTA Chairman and CEO Thomas F. Prendergast. “CBTC represents the MTA’s efforts to bring advanced technology to a century-old subway system that, in some parts, has not been updated in decades. On the L Line, where CBTC has been installed for several years now, we have seen improved service and we have been able to increase capacity significantly. Once we’re done installing CBTC on the 7 Line, those customers will also benefit from similarly improved and increased service. The Queens Boulevard project is a continuation of our efforts to make those improvements system-wide.”

The MTA has now given the go-ahead to a third supplier, Mitsubishi Electric Power Products Inc. to demonstrate interoperability with Siemens and Thales by installing its own CBTC technology on the the Culver Test Track. Mitsubishi was awarded a 36-month contract over two other bidders, Ansaldo STS USA Inc. and GE Transportation Systems, and is doing the installation largely at its own cost, accepting what NYCT is calling a $1.2 million stipend to complete the project. NYCT had anticipated the cost of this project at around $20 million. (Editor’s note: Hitachi expects to complete acquisition of Italian conglomerate Finmeccanica’s two railway equipment subsidiaries, AnsaldoBreda and Ansaldo STS, by the end of October. In a complex deal that must meet regulatory and shareholder approval, GE intends to sell its signaling and communications business to Alstom, and acquire Alstom’s Thermal Power, Renewable Power and Grid businesses.)

Siemens describes Trainguard MT as “the most extensively deployed automatic train control system, used by more than 20 metro operators around the world,” among them New York, Paris and Beijing. The NYCT Queens Boulevard Line Phase 1 contract is Siemens’ fifth CBTC project in the U.S.

Click HERE to view an MTA video on the benefits of CBTC.