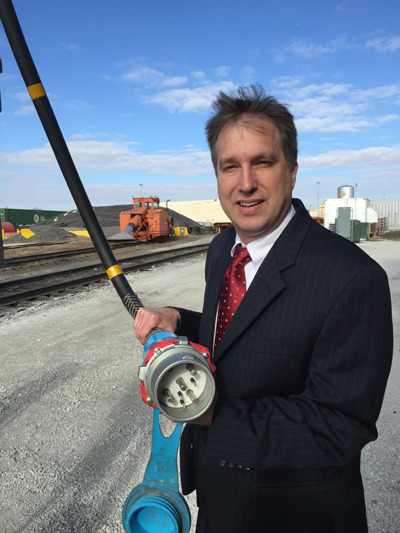 The locomotives are branded “ECO” for their operating efficiencies in reducing emissions and fuel consumption. More than $19 million in grant funding through the federal Congestion Mitigation and Air Quality Improvement Program (CMAQ) made the $30 million public-private partnership to replace Norfolk Southern’s entire Chicago yard locomotive fleet possible. The new units feature a stylistic green paint scheme with an Illinois-shaped icon and the slogan “Working Together for a Cleaner State.”

NS designed and built the locomotives at its Juniata Locomotive Shops in Altoona, Pa., using components from Electro-Motive Diesel, a division of Progress Rail Services, a Caterpillar company. The prime-mover is a 3,000-hp, EPA Tier 3-certified, 12-cylinder EMD 710. NS plans to put 18 of the locomotives to work at its five major Chicago rail yards by the end this year. Three of the 18 are configured as “mother-slug” units, with traction-motor-only slugs added for extra power. The units are expected to prevent the release of 7.58 tons of particulate matter and 196 tons of nitrogen oxides pollutants annually while using less fuel compared with older switching locomotives, NS said. Based on 1980s-era GP50s, they feature NS’s “Admiral Cab,” EMD’s EM2000 microprocessor-based engine control system, and idle-reduction technology—plug-in engine heating systems to eliminate locomotive idling, a collaborative effort with U.S. EPA Region V.

“These locomotives will be rolling billboards in Chicago for years to come of one of the finest examples of collaboration between public and private partners to think and act big on diesel emission reduction technology,” said Norfolk Southern Vice President Mechanical Don Graab. “The bottom line is cleaner air quality for Chicago residents. We thank the Illinois Environmental Protection Agency, the Illinois Department of Transportation, and the Chicago Metropolitan Agency for Planning for their partnership in helping us achieve this goal for our locomotive fleet.”

“More than 1,000 engineering and manufacturing employees working for Electro-Motive in LaGrange, Ill., designed and manufactured the engines, electrical lockers and various other components on this ECO locomotive,” said Progress Rail President and CEO Billy Ainsworth. “This locomotive is a tribute to our dedicated employees and their commitment to sustainable solutions that improve the world where we live.”

Earlier this year, NS introduced 10 ECO locomotives at its Atlanta yard, and next year plans to add three more units at its Macon and Rome yards in Georgia with additional CMAQ grants.