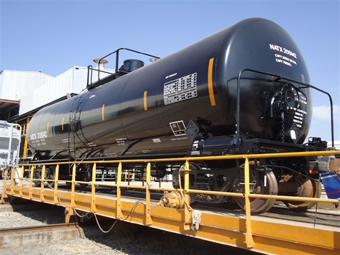 Greenbrier said it was the first to announce plans to design a tank car with these specifications, which it calls the “Tank Car of the Future,” and plans to double its production capacity for new tank cars over the next 12 months to meet surging demand. The company also said claims by other stakeholders in the tank car industry expressing that up to 10 years will be required to fully enhance tank car puncture resistance “are simply wrong.”

The Railway Supply Institute Committee on Tank Cars, of which Greenbrier is a member, has recommended to PHMSA that “all legacy (jacketed and non-jacketed) tank cars transporting Class 3 Packing Group I and II materials other than crude oil and ethanol would be modified or removed from Class 3 PG I and II service by Dec. 31, 2025. This would require modification of approximately 14,300 non-jacketed tank cars and 5,400 jacketed tank cars in other flammable liquids service.”

Greenbrier said its Tank Car of the Future “is designed for safer transportation of crude, ethanol, and other flammables in North America as well as use with other hazardous materials traffic. The car has advanced safety features that include a 9/16-inch-thick steel tank shell, more robust top and bottom outlet protection, jacketed shells with thermal protection, and full-height, half-inch-thick headshields. These new design features combine to inhibit discharge of contents during a derailment, to reduce penetration of the tank shell and to slow pool fires that can result when hazardous contents of a tank car escape in a breach and are ignited. The new design will also be equal in capacity volume to the legacy DOT-111 tank car with a loading volume of 30,000 gallons.

“Conditional Probability of Release (CPR) measures the likelihood of tank car spills in the event of a derailment at different speeds and by different car types. With the Tank Car of the Future design, at a derailment speed of 50 mph, CPR performance improves by up to eight times vs. the majority of tank cars now operating in hazardous service in the North American fleet. Also when measured by CPR, the Tank Car of the Future is twice as safe as the current state-of-the-art tank car for transporting hazardous materials—a fully jacketed and insulated CPC-1232.”

In addition, through GBW Railcar Services, LLC, a newly launched 50/50 railcar repair joint venture with Watco Companies, LLC for retrofitting and repairing railcars, Greenbrier says it “supports PHMSA’s effort to retrofit the existing fleet of tank cars currently used in the transport of all flammable commodities. GBW agrees with PHMSA that every packing group classification—PG I, II, and III—within the Class 3 flammables category must be transported in a retrofitted tank car by 2020, an aggressive but achievable timeline.

“GBW will deliver on retrofit designs for the legacy DOT-111 tank cars that include optimally sized pressure relief valves, head shields, top fittings protection, thermal protection, and shell jackets with thicker metal for tank car exteriors. Appropriate retrofit choices permit extended service for DOT-111 tank cars in flammable liquids service and for other hazardous materials transport as these cars are placed in lower risk service over time. GBW also offers retrofit alternatives for the most recently built CPC-1232 tank cars, with features including enhancements to the bottom outlet valve and pressure relief valves that will reduce the likelihood of tank cars releasing contents in derailments. Combined, these retrofits meaningfully improve the safety performance of all tank car types in continued service.”

In recent comments filed with the PHMSA, Greenbrier has also recommended the agency “close a loophole that presents an unacceptable public safety risk by permitting the transportation of Class 3 flammable liquids in blocks of 19 or fewer legacy tank cars that PHMSA otherwise deems unsafe. Greenbrier has suggested that PHMSA focus on the commodities being transported in determining the car type to be utilized and not on the number of tank cars in a train set.”

“Greenbrier continues its call for prompt regulatory action to require safer tank cars, in response to recent freight train derailments involving flammable liquids,” said Chairman and CEO William A. Furman. “Recent derailments, including the (CN) derailment in Saskatchewan on Tuesday, and the findings of the Quebec coroner related to the tragic death of 47 people in the Lac-Mégantic accident underscore the urgency of taking concrete actions to improve tank car design for both newly-built tank cars and for tank cars currently in service. The fact that the accident in Saskatchewan resulted in a fire and the evacuation of local homes, even though the derailed cars in the train were not carrying crude oil, also demonstrates why enhanced safety standards should apply to all tank cars containing flammable liquids—not just those carrying crude oil and ethanol. Ultimately, the rail industry should transition all hazardous materials to a more robust tank car—regardless of the flash point at which these materials ignite.”

“As recent derailment events have illustrated, the urgency of upgrading the safety of the North American tank car fleet is obvious. Suggestions that industry requires six, seven or even up to 10 years to fully enhance the puncture resistance of tank cars are simply wrong. The rail supply industry can move faster than that and we will. Greenbrier and others are already making necessary investments to address this need,” Furman added. “U.S. Secretary of Transportation Anthony Foxx has stated his commitment to finalize new regulations related to flammable liquids transported by tank cars as soon as possible. Transportation Canada has taken the lead by adopting new tank car standards earlier this year and moving forward to establish an even higher standard soon. A similarly prompt decision in the U.S. will provide industry with the regulatory certainty it needs to continue investments already under way to produce more robust tank cars. We urge the Secretary and Acting PHMSA Administrator Butters to act no later than the end of 2014 and then move quickly to harmonize the U.S. standards with new Canadian rules to create a unified North American tank car standard.”