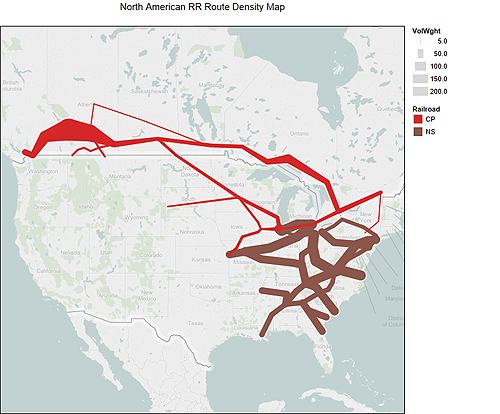 Canadian Pacific Railway has held early-stage merger talks with Norfolk Southern and is raising financing for an acquisition, according to Nov. 9, 2015 news reports citing confidential sources at both carriers. NS stock jumped 11%, the most since 2008, to $88.62 at the close of the New York Stock Exchange, while CP’s 5.7% rally to C$188.79 on the Toronto Stock Exchange was its biggest gain since 2013.

CP’s bid for NS is viewed as CP’s revived attempt to form a North American transcontinental Class I after fruitless merger talks with CSX in 2014. In floating the possibility of a merger with CSX, CP CEO Hunter Harrison challenged the long-held industry view that it was pointless to even discuss another merger because federal regulators would not allow it.

That view could be changing. Another megamerger—leading to a final round of consolidations—could be possible, though gaining regulatory approval would be a lengthy process, industry observers say. Harrison, Railway Age’s 2015 Railroader of the Year, has said that a final round of mergers “is not a question of if, but when.”

Norfolk Southern, which is currently valued at about $24 billion, as expected declined comment on the matter. Canadian Pacific, whose market value is around C$27 billion (US$20 billion), issued a statement saying, “There is no material news pending at this time. CP does not comment on market rumor and speculation.” CP cited a request from the Investment Industry Regulatory Organization of Canada that it respond to the day’s stock trading.

Norfolk Southern operates about 20,000 route-miles of railroad in 22 eastern U.S. states, and serves each of the region’s major container ports. Its connections with western railroads are at Chicago and Kansas City, both of which Canadian Pacific serves. CP’s network spans southern Canada from Montreal to Vancouver, and turns south to cut across the Dakotas, Minnesota and Wisconsin before entering Chicago. The railroads’ markets are complementary. Intermodal comprises about 22% of NS revenues, followed by coal at 21%. Automotive is about 9%. CP derives the largest chunk of its revenues, about 28%, from industrial and consumer products. Both railroads’ stocks had been falling this year amid declining shipping volumes, due in part to dips in coal and crude oil. CP fell 20% this year through Nov. 6; NS, 27% during that time span.

“A merger proposal would face less of an uphill battle today than a year ago, when CP unsuccessfully went after CSX,” said Cowen and Company Managing Director and Railway Age Wall Street Contributing Editor Jason Seidl. “Indeed, the fall of 2014 was not the ideal time for such an effort to be launched, primarily because shippers and regulators were disenchanted with the rail industry due to severe service and capacity issues that emerged late in 2013 and did not start abating in any material sense until 2015. CP’s reported move to join forces with NS will likely still trigger service concerns with shippers who will recall service challenges associated with past transactions, including those encountered by CSX in 1997 when it integrated parts of Conrail into its network after a fight over the acquisition of the company with NS. But such concerns will likely be much less pronounced today than a year ago. According to our 3Q15 Rail Shipper Survey, 58% of shippers are opposed to another Class I merger, a material drop from the 70% recorded in both our 2Q15 and 3Q14 surveys.”

“We believe NS management is less likely to quickly rebuff CP’s offer in today’s environment than in the case of CSX’s management last year, when coal, however weak then, was still not as bad as today,” noted Seidl. “Additionally, rail demand has fallen in many other carload groups, limiting operations-driven earnings power, and subsequently stock price upside. If NS management does attempt to rebuff the offer, we would not be surprised, given the tenacity of CP’s management, if the company resorts to other means for making the deal happen. Still, a merger between the two carriers would likely face hurdles, not the least of which will be the Surface Transportation Board, which has been listening intently to shippers’ service and rail pricing concerns.”

“A CP-NS merger could be beneficial for the two carriers in the long term, and while a big rail transaction typically involves a tough integration phase, shareholders may view this one as a rare opportunity to maximize their value in an otherwise weak market,” said Seidl. “Shippers may be less vehemently opposed to a merger today than they were a year ago when service was much worse.”

Railway Age Capitol Hill Contributing Editor Frank Wilner believes “there may be nothing to these merger rumors,” which have been attributed to leaks by staff people at CP, NS or both railroads:

“Securities and Exchange Commission regulations impose strong penalties for leaks. Very rarely has a rail merger been leaked, and almost always the announcement catches everyone by surprise.

“The STB, following its 2000 merger moratorium, put new merger rules in place that impose significant pro-competitive hurdles that have yet to be tested.

“The lone Republican STB member, Ann Begeman, has not indicated if she wants reappointment, meaning there is uncertainty as to the Republican who would vote on a merger application. And if she does stay, she has been proving herself an independent voice that does not necessarily walk in lock-step with railroads.

“There is no certainty the next President will name Dan Elliott STB chairman. Even a Democrat President could choose a different chairman, and there is strong support for Deb Miller to be chairman down the road. Miller is another independent voice, and as with Begeman, has strong ties to merger-opposing agriculture. Moreover, Deb Miller said publicly earlier this year—in June in Chicago at Railway Age’s Rail Insights Conference—that the Board is not interested in seeing a merger application. To me, that’s a signal that she would not look fondly on such an application.

“Senate Commerce Committee Chairman John Thune has proposed legislation to increase STB size to 5. It is not known if that provision could pass next year. If it does, there is the uncertainty of who the other 2 STB members will be. And not knowing if a Republican or Democrat will occupy the White House creates further uncertainty as to political control of the STB.

“Finally, Hunter Harrison is on record saying that he would gladly trade merger approval for open access. No other railroad in the U.S. wants open access. That in itself would obviate other railroads working against a Harrison-initiated merger.

“With all those uncertainties, rational boards of directors would not take such a chance—or shouldn’t, in my opinion. And maybe the rumors are mischief intended to help identify enough early opposition to quash Hunter Harrison’s legacy intentions.”