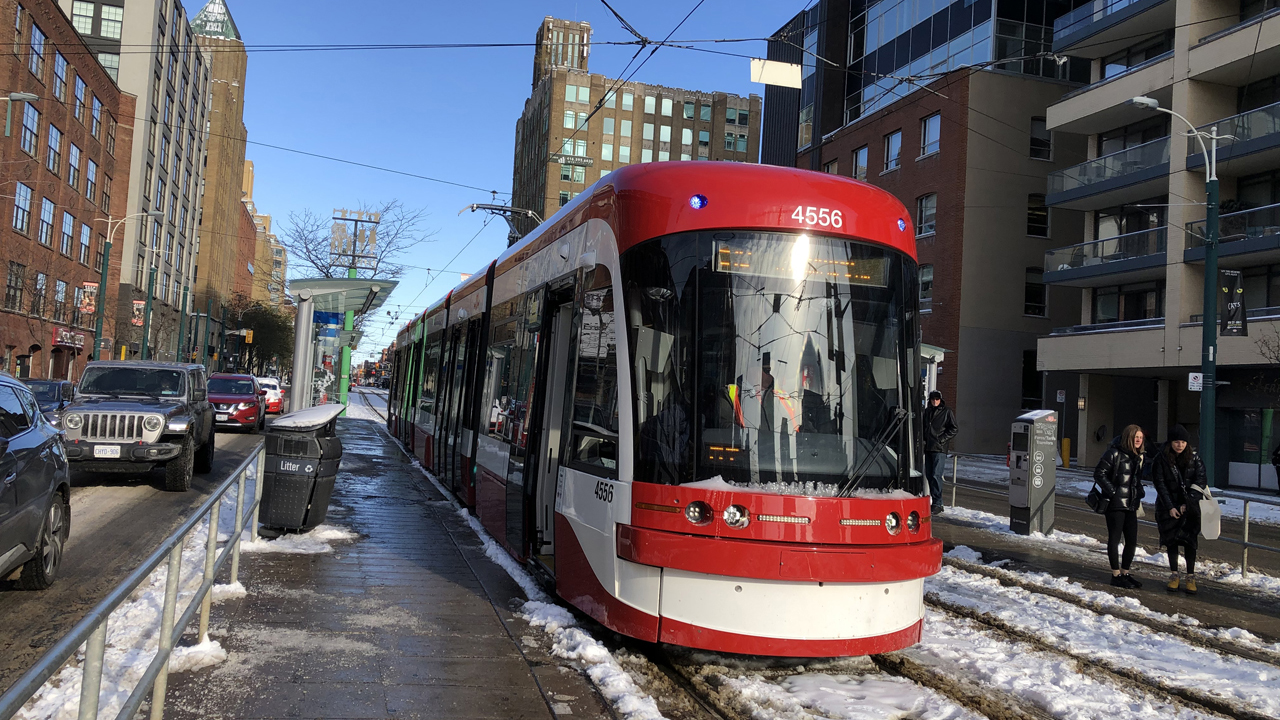 TTC on Nov. 8 reported “personal information of some TTC employees, former employees and pensioners may have been stolen,” following a cybersecurity attack, which the agency became aware of on Oct. 29. (Photo by William C. Vantuono)

Hall Construction Co., Inc. of Wall, N.J., will update NJ Transit’s Perth Amboy station on the North Jersey Coast Line. Built in 1927 in the Renaissance Revival architectural style, the station was listed on the National Register of Historic Places in 1984. Renovation work will preserve the station’s distinctive design elements, and includes construction of two new high-level platforms; installation of four new elevators and additional ramps and stairs to meet federal Americans with Disabilities Act (ADA) requirements; improvements to restrooms; installation of upgraded security cameras; and repairs to both the eastbound and westbound buildings and the pedestrian bridge.

Pre-pandemic, the station served an average of 874 weekday rider trips.

The Perth Amboy project is included in NJ Transit’s 5-year capital plan, which was launched, along with the agency’s first-ever 10-Year Strategic Plan (2030), in June 2020. The total project cost is estimated at approximately $63 million, with completion expected in first-half 2024.

Meanwhile, NJ Transit has completed installing 558 new ticket vending machines (TVM), which are part of the agency’s Fare Modernization program. They feature contactless payment options, such as contactless cards and mobile wallet applications, as well as improved functionality, with faster printers and new displays for train arrival and departure information. In addition, the machines offer audible and visual instructions and are height adjustable to accommodate customers with disabilities.

“These new customer-friendly TVMs—now installed system-wide—represent just one aspect of a complete modernization of NJ Transit’s entire fare collection system, including new handheld mobile devices for train crews, new on-board bus validators, and many new mobile ticketing options,” NJ Transit President and CEO Kevin S. Corbett said. “All of these methods include ‘contactless’ fare payment options, which have proven especially welcome and popular with customers returning to our system as we emerge from the pandemic.”

Metrolinx announced the WAVE pilot project over the summer, and following weeks of mapping and testing, it debuted shuttle service on Nov. 8. The shuttle is operating along a 3.7-mile (6-kilometer) route (see map below).

The WAVE shuttle currently complements existing DRT On Demand service and is scheduled as Route 300 serving the residential, recreational and industrial areas of the Port Whitby neighborhood, according to Metrolinx.

The shuttle operates at a maximum speed of 12 mph (20 kph) while in autonomous mode, and has a trained safety attendant on board at all times who can manually take control of the vehicle, if required. It carries four riders at a time, with free pick-up and drop-off at designated stops, and runs on weekdays between 8:30 a.m. and 3:30 p.m. during off-peak times and on weekends between 7 a.m. and 7 p.m. to minimize traffic congestion.

The service is also aided by smart transportation infrastructure that monitors traffic conditions and helps to improve the safety of cyclists and pedestrians, Metrolinx said.

In the coming months, Metrolinx and its pilot project partners will assess WAVE operations and customer experiences to determine how the technology may be expanded in the future.

TTC on Nov. 8 reported “personal information of some TTC employees, former employees and pensioners may have been stolen,” following a cybersecurity attack of its IT infrastructure. The agency, which became aware of the incident on Oct. 29, said the culprits were able to gain access to TTC files that may contain the names, addresses and Social Insurance Numbers of up to 25,000 past and present employees. A small number of customers and vendors may also be affected.

“It is very important to note that, at this time, there is no evidence that any of the personal information that was accessed has been misused,” TTC reported. “This was a sophisticated incident, similar to the hundreds of incidents reported in Canada in the last year alone. The TTC is notifying individuals who may have been affected and will be providing credit monitoring and identify theft protection to them as appropriate. As our investigation continues, we will reach out to additional individuals who may be affected by this incident to offer assistance as appropriate. This matter is of the utmost importance to the TTC and is being treated as a top priority.”

The cybersecurity attack resulted in a number of TTC’s servers being encrypted and locked, leading to the loss of the agency’s VISION system, vehicle arrival information, and online Wheel-Trans booking systems, as well as external network connectivity, including email, according to TTC CEO Rick Leary. “Over the past week, we have been working day and night to resolve this situation—to get our lost services back online and to gain a clearer understanding as to the breadth of the incident,” he said on Nov. 8.

While public-facing systems are now mainly restored, Leary said that over the coming weeks “we will continue rebuilding the remaining impacted servers and internal services, like re-establishing external email capabilities. But in truth, and based on the experiences of other organizations, this could take some time.”

He noted that “TTC continues to follow best practices in securing our IT infrastructure,” and he thanked TTC employees “for their dedication and hard work, and our customers for their patience and understanding.”