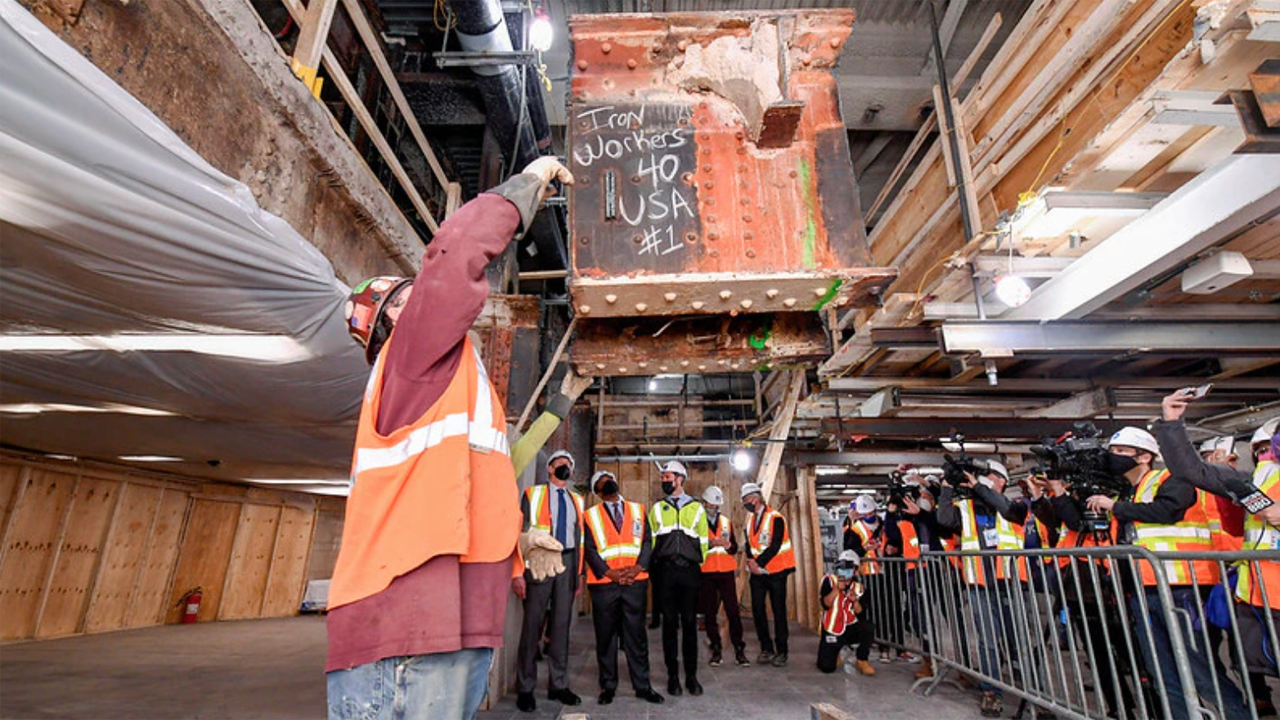 MTA is advancing Penn Station reconstruction with the removal of seven low-hanging beams, dubbed “Head Knockers.” The beams, weighing in at 10 tons apiece, are part of the original Penn Station structure and have limited passageway heights to 6 feet, 8 inches.

“Metrolink is making it easier for people to use public transportation and other modes of transit to get where they need to be,” Metrolink Director of Marketing and Partnerships Monica Bouldin said. The Transit app “provides customers with another tool to help them make the best travel decisions.”

“Our mission is to help people get around without their own car,” said David Block-Schachter, Chief Business Officer at Transit. “In a region like southern California, which has multiple mobility choices for riders, it’s important to have one app that brings it all together. By partnering with Transit, Metrolink is also joining forces with LA’s transit systems.”

MTA is advancing Penn Station reconstruction with the removal of seven low-hanging beams, dubbed “Head Knockers.” The beams, weighing in at 10 tons apiece, are part of the original Penn Station structure and have limited passageway heights to 6 feet, 8 inches. Now that crews have replaced the previous structural roof with a secondary structure to bear the load, the beams are obsolete, MTA said.

Beam removal is part of the MTA’s ongoing efforts begun in June 2019 to “increase the spaciousness of the LIRR concourse at Penn Station,” the agency reported. This includes increasing the ceiling height to 18 feet across the entire concourse; nearly doubling the width of the 33rd Street Corridor to 57 feet from the previous 30 feet; adding entrances as well as more stairways and elevators to platforms; improving lighting; and creating more intuitive wayfinding and new direct sight lines to track level. Work is slated for completion in first-quarter 2023.

“New Yorkers deserve a grand entrance to New York City and the removal of these low-hanging beams is another step toward that goal,” MTA Chair and CEO Janno Lieber said. “A new Penn Station, filled with sunlight, accessible to all and more like the original Penn Station will replace the cramped, dimly lit labyrinth that we’ve had since the 1960s. It will also be ready to receive the additional train capacity when the Penn Access and Gateway Tunnel projects are completed.”

“This renovation brings us one step closer to Gov. [Kathy] Hochul’s vision of a Penn Station that is both commuter-first and community-oriented,” New York Lieutenant Governor Brian Benjamin said. “The Governor and I are committed to creating a better experience for all commuters traveling through New York—and that includes our Long Islanders who use LIRR, New Yorkers who share the subway system, and future MTA customers—who will take Metro-North from the Bronx and Westchester—when Penn Station Access is completed.”

Infrastructure Canada and TransLink will contribute C$3.24 million and C$4.86 million, respectively, to upgrade the south entrance of Brentwood Town Center Station on the SkyTrain Millennium Line. The investment, announced March 9, is part of a C$32.6 million initiative to upgrade the entire station.

The station’s south entrance will be closed to riders for approximately one year once construction starts in April. The north entrance will remain open. The project is slated for completion in 2024.

The Brentwood Town Center Station is the first Millennium Line station to receive upgrades since the line opened in 2002. Each weekday in 2019, about 6,000 riders boarded SkyTrain at this station, which offers connections to seven bus routes.

“The neighborhood around Brentwood Town Center Station is one of the fastest-growing areas on our system with 9,000 more homes being added in nearby developments,” TransLink CEO Kevin Quinn said. “These station upgrades are part of our commitment to improving the customer experience and making our facilities more accessible and more convenient for everyone.”