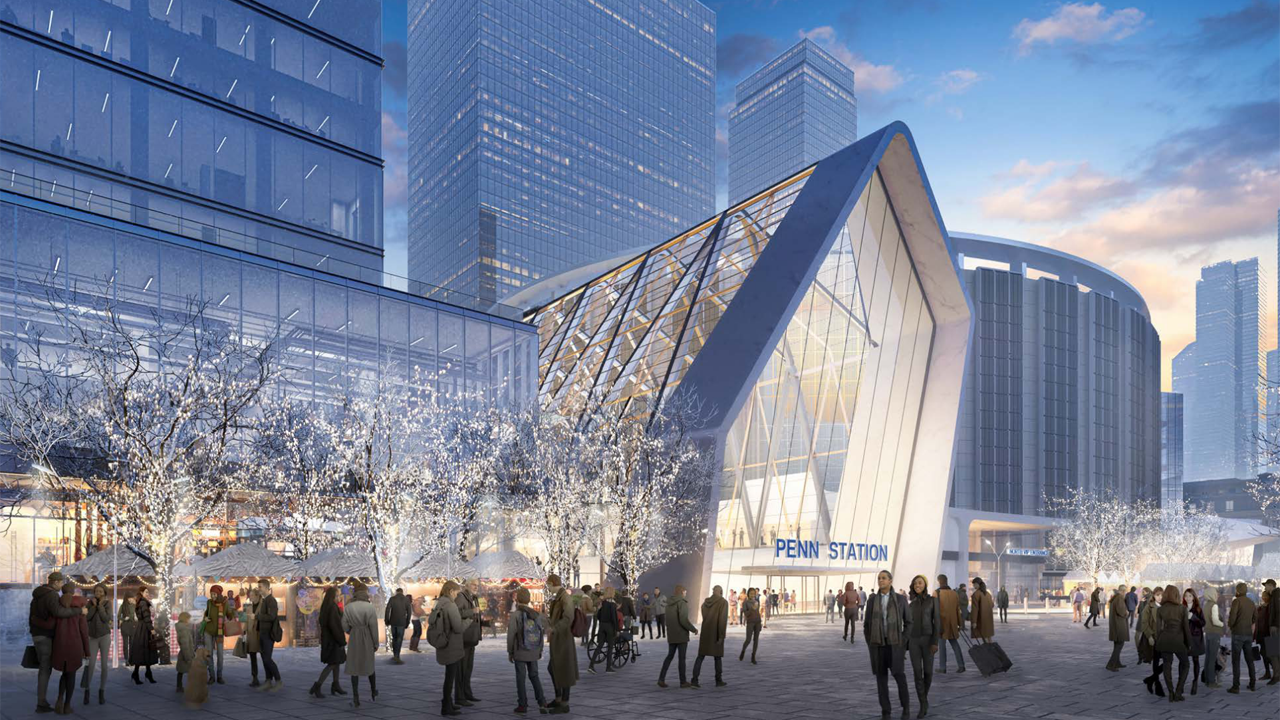 Rendering of the proposed reconstruction of the existing Penn Station in New York City, courtesy of the office of New York Governor Kathy Hochul

While no date has been set to start the project, Gov. Hochul estimated it would take 4-5 years to complete and come with a price tag of $6 billion-$7 billion.

Station expansion and the Gateway Project initiatives “both of which the governor strongly supports,” and were part of the previous plan, will continue on “their federally established timelines,” according to the governor’s office.

“The era of neglecting our Penn Station commuters and the neighboring community is over,” Governor Hochul said. “This plan puts New Yorkers first, delivering the rider-focused transit experience and great neighborhood they deserve. Investing in Penn Station means investing in New York’s future as we recover from COVID and build a more sustainable, livable city.”

“I am thrilled the governor has decided to put an end to decades of delay and is insisting that we fix Penn Station now,” New York MTA acting Chair and CEO Janno Lieber said.

The new neighborhood plan comes after several months of collaboration and more than 100 meetings with community stakeholders, government agencies and elected officials to improve on past plans and establish a new way forward, according to the governor’s office, which noted that the plan will be subject to further public review.

Among the new plan’s features:

• A 450-foot-long, single-level, double-height train hall that doubles passenger circulation space on the new public level from approximately 123,000 square feet to approximately 250,000 square feet, and eliminates the congested passageways in the existing Penn Station. According to the governor’s office: “The relocation of Amtrak’s operations to the new Moynihan Train Hall provides the opportunity to overhaul Penn Station, eliminating the bulk of the first subterranean level to open up the main concourse to natural light, improving retail and other user amenities, increasing safety and security, significantly expanding passenger circulation areas, expanding entrances and exits, and making it easier for passengers to navigate within the station as well as connect to their destinations beyond.”
• 18 additional escalators or stairs (currently, there are 73) and 11 more elevators (currently, there are 16) going to the platforms.

• A decrease of 1.4 million square feet of development from the previous plan and lowering heights for proposed buildings.
• New design controls to protect views of the Empire State Building along 33rd Street.
• Creation of a Public Realm Task Force comprising community leaders and stakeholders, which will develop a plan of “prioritized public realm improvements, to be funded by a Public Realm Fund, with initial revenue from redevelopment being dedicated to this fund.”
• Creation of underground loading/unloading for Madison Square Garden, taking trucks off the street.
• Allowance for up to 1,800 residential units, of which 540 would be permanently affordable. The plan also “mandates one building as residential, which will include 162 permanently affordable units—more than the entire number of residences that would be displaced if the southern expansion of Penn Station occurs.”
• Expansion of new underground corridors to the Sixth Avenue IND line, allowing users of the 34th Street Herald Square Station (B, F, M, N, R, W lines) seamless access to Penn Station.
• Nearly doubling the existing entrances to Penn Station from 12 to 20, and requiring developers to add additional subway entrances and exits directly to and from buildings.

“In terms of the surrounding development, which will help fund the project, Gov. Hochul’s proposal still achieves the necessary revenues while notably scaling down the previous plan, and significantly expanding community and public realm benefits,” the governor’s office said. “The new plan takes into account recommendations from the Community Advisory Committee Working Group (CACWG), which worked in consultation with Empire State Development, the Metropolitan Transportation Authority, Amtrak and NJ Transit. The CACWG will continue to inform the plan through its build-out, and the governor is directing the MTA to actively engage community stakeholders, transit, sustainability, and planning experts, as well as users of Penn Station from across the region, in the process of finalizing the project.”

According to a Nov. 3 report in The New York Times, “New York officials said that they expected the federal government to cover half of the cost of overhauling Penn Station and New Jersey to cover 25% … The portion paid by New York State would be derived from the development of the [10] new towers, whose owners would contribute part of the revenue from office leases, retail sales and other sources, the officials said.”

The Times report pointed out that the most recent plan by former New York Gov. Andrew M. Cuomo “called for allowing 10 supertall towers to be built in Midtown Manhattan and using money from that development to finance the construction of nine additional sets of track, five platforms and other infrastructure upgrades, which officials say are necessary to avoid overcrowding and transit delays at North America’s busiest train station.

“The development would have also paid for cosmetic improvements at Penn Station, and Mr. Cuomo argued that all of it had to happen as a single project to be financially viable.

“But Ms. Hochul said that the renovation of Penn Station and construction of new towers could move forward without the track and infrastructure upgrades and without jeopardizing future funding for them, though details on exactly how that would work were thin.”