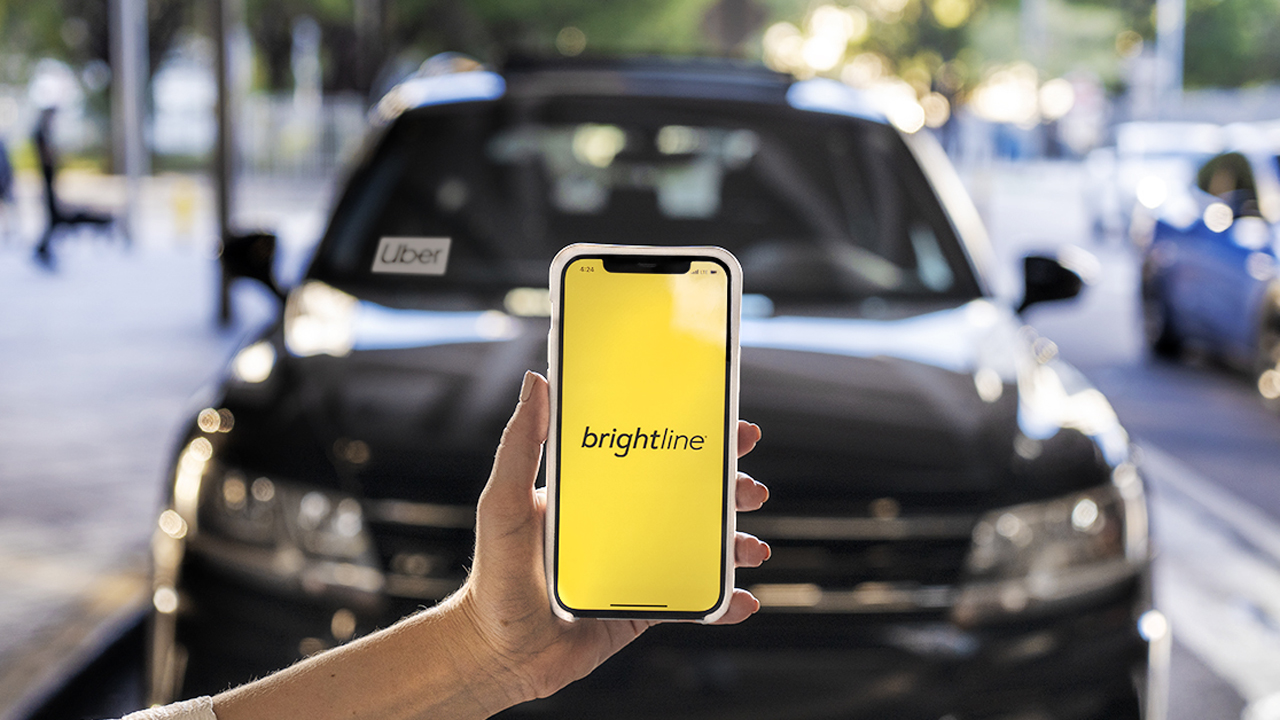 Brightline is teaming with Uber to help get passenger rail riders to and from all five of its South Florida stations (Miami, Aventura, Fort Lauderdale, Boca Raton and West Palm Beach).

Brightline on Jan. 13 reported teaming with Uber to help get passenger rail riders to and from all five of its South Florida stations (Miami, Aventura, Fort Lauderdale, Boca Raton and West Palm Beach). The move builds on Brightline+ service, which was launched in 2021 and includes airport shuttles, event shuttles and electric golf cart service to local attractions in close proximity to Brightline stations.

“It is critical to our guest experience that access to our stations is convenient and seamless,” Brightline President Patrick Goddard said.

“Through this partnership with Brightline, Uber continues our work in complementing mass transportation and expanding transportation access in South Florida,” said Dmitriy Vanchugov, Head of Partnerships for Transit at Uber. “By making Uber easily available to Brightline users, we can together bridge first- and last-mile gaps and bring shared mobility options under one roof, making it more convenient and accessible for customers.”

CTA on Jan. 13 reported that its Board awarded a new four-year property maintenance contract to East Lake Management Group, Inc. as part of the Red Line Extension project (see map above). Awarded following a competitive bid process, the contract will not exceed $23.5 million.

The initial disadvantaged business enterprises (DBE) goal for the contract was 30%, according to the transit agency; however, the vendor surpassed that and has committed to a 60% DBE participation goal, translating into more than $14 million of the overall contract value being made available to DBEs.

The planned $3.6 billion Red Line Extension project “has several parcels that will need to be acquired in anticipation of a design-build contract being awarded at a future date,” CTA said. CTA will own the parcels before the design-builder takes control of them, and during this time, the contracted property manager will secure and maintain the properties.

The $74.2 million project, which started in December, includes construction of a newly mined tunnel passageway; creation of new stairways and widening of existing stairways throughout the terminal; upgrades to the terminal’s fire alarm system; and core repairs to the existing tunnels within the terminal. Its aim is to help accommodate the current passenger flow and future growth, according to Skanska. Completion is expected for fourth-quarter 2024.

“We’re looking forward to providing the infrastructural upgrades needed to one of New York City’s largest and most highly trafficked transit hubs,” said Keith Chouinard, Senior Vice President and General Manager for Skanska USA’s Northeast Civil operations. “It will largely improve the commuting experience for the thousands of MTA passengers that utilize and rely on the terminal to get to their destinations across the city and back home each day.”

Separately, NYCT President Richard Davey and Senior Vice President of Subways Demetrius Crichlow recently visited Liberty Avenue Middle School in Brooklyn (see picture, above). They met with a group of four seventh-graders selected as one of 10 state finalists in the 13th annual Samsung Solve for Tomorrow STEM (Science, Technology, Engineering, and/or Mathematics) competition for their idea focused on subway safety, according to MTA. The finalists are Sinthia Orni, Criss Roman Castellanos, Chris Santos Martinez, and Qi Xu; all 12 years old from East New York, Brooklyn. A state winner will be announced sometime between Feb. 15 and April 15, the transit agency said.

Under the guidance of their teacher, Jessica Abrams, the students advanced to the finals for their idea of placing new smart signs in subway stations that would allow commuters to report either a 911 emergency or request mental health assistance with two separate buttons: one would connect to the police and the other button would connect to mental health responders, according to MTA. Their idea was inspired by old emergency-service mini towers in their neighborhood with a red tab to alert the New York Fire Department and a blue tab to alert the New York Police Department, MTA said.

“I was ecstatic to learn that a group of seventh-graders advanced to finals with an idea that involves the MTA, and I am thrilled to have had the opportunity to meet them in person,” Richard Davey said. “This goes to show how relevant public transit is to every New Yorker, no matter how old. I commend the work they are doing and their teacher for her support and leadership. I wish them the best of luck in the next round.”

Demetrius Crichlow added: “I hope we were able to provide a little more insight today on the MTA’s existing Help Points and hope they continue to apply this kind of creative thinking in all aspects of their lives.”

VRE on Jan. 16 reported that its FY 2024 operating and capital budget has been approved by its two parent commissions, Northern Virginia Transportation Commission and Potomac and Rappahannock Transportation Commission. The commuter railroad’s $190.7 million budget, which will take effect July 1, 2023, and holds fares at FY 2020 levels, now goes to the governing bodies of the nine jurisdictions VRE directly serves for their review and approval. VRE connects central and northern Virginia with the District of Columbia.

According to the railroad, the budget projects 10,000 average daily riders, resulting in fare revenue of $28.6 million. The combined jurisdictional contribution of $16 million, which is roughly $2.5 million or 18% above the FY 2023 budget, remains $2.3 million below pre-pandemic levels, reported VRE, which noted that use of approximately $32 million in federal pandemic relief funds “allows for a balanced budget.”

“A six-year forecast, paused during the pandemic but included in the FY 2024 budget document, demonstrates the sustainability of VRE’s budget and highlights areas of potential risk so they can be addressed in advance,” VRE said. “Return of ridership is key. The forecast projects ridership approaching, but not fully reaching, pre-pandemic levels of 18,500 daily passenger trips by FY 2029. Such an increase in ridership, along with a return to alternating fare and subsidy increases, will steadily reduce VRE’s reliance on federal pandemic relief funds.”

Also included in the budget document is VRE’s $1.3 billion six-year Capital Improvement Program (CIP), which the commuter railroad said is two-thirds funded. The CIP includes investments in stations, maintenance and storage facilities, rolling stock, and information technology, and “complements the commonwealth’s $4 billion Transforming Rail in Virginia initiative, which will provide the opportunity for VRE to increase weekday and implement weekend service over the next decade,” according to VRE.

VTA on Jan. 16 gifted all light rail and bus riders a premium subscription to Transit app. In addition to planning and tracking their trips, the new “Royale” upgrade will give riders access to features such as customizable themes and personalized emoji avatars.

“Transit app automatically determines if you’re a VTA rider and applies the Royale upgrade without you having to do anything,” according to VTA’s announcement to riders. The free upgrade is available through January 2025.

The Transit app is available in the App Store or Google Play.