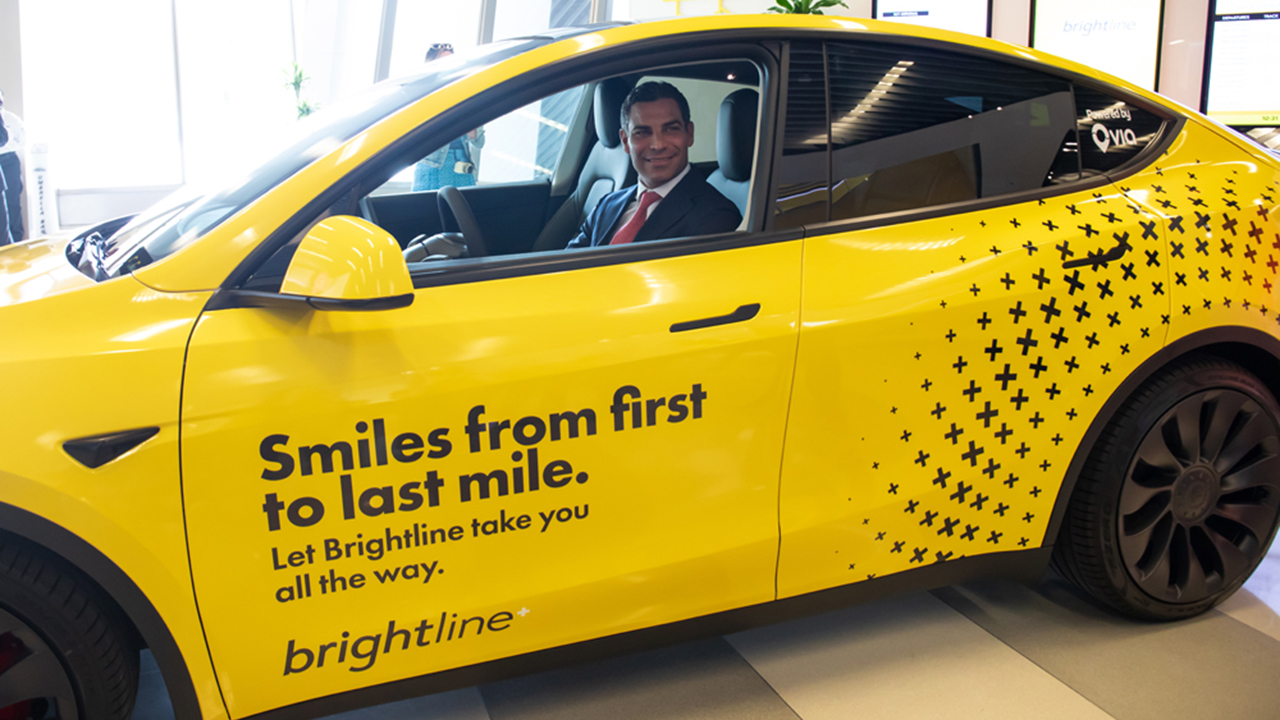 One of the logistical challenges that seems to be a regular topic of conversation among transit managers and rider-advocates alike is how to transport riders the “first mile” or “last mile” of a journey, the distance between their actual point of origin and where they board the train, and the distance between the station where they exit the train and their final destination.

The recent trend seems to be building park-and-ride stations and assuming that the riders will use their private automobiles to traverse the first and last miles. Brightline, Florida’s private-sector passenger line, has a different idea: Brightline+; a set of shuttle routes and demand-response rides that cover the first and last miles for Brightline riders, with vehicles providing private rides to and from stations.

I had the opportunity to try the new service during a brief visit to South Florida. It was a six-hour visit to the area; just enough time to try the Brightline+ experience and have dinner with a friend before heading north again. I had arranged a ride to Brightline’s West Palm Beach station and from the Fort Lauderdale station, booking rides at both ends to get the full experience. I traveled south on Amtrak’s Silver Star (the only Amtrak train in Florida at this time), arriving about two hours behind schedule, so I had to re-book my Brightline segments while I was still on the Amtrak train.

As I arrived at Amtrak’s West Palm Beach station, I received a call from a “561” number on my cell phone. It was my driver, telling me the number of the vehicle that would take me to the Brightline station. It was only two blocks away and I normally would have walked, but my goal was to get the full Brightline+ experience. I found my assigned vehicle, a bright yellow Tesla, outside the station, along with a few other yellow vehicles bearing Brightline markings, and got in. A few minutes later, I was checking in at the station for my ride on Brightline. On the way to Fort Lauderdale, I had a snack and a beer, and met with Brightline’s Media Relations Director, Vanessa Alfonso, who rode with me. As I was about to alight from the train, I got a similar call from my next driver. I boarded the vehicle he identified, and he dropped me at the beach area in Fort Lauderdale, near Las Olas Boulevard, as I had booked. While a local #11 bus would have gotten me there eventually, using Brightline+ was a convenient alternative that saved a lot of time.

Brightline is actively promoting the service, and the railroad’s web site, www.gobrightline.com, features a banner that says: “Go car-free. Carefree,” a message that could appeal to several segments of the community: seniors who want to avoid the difficulties of using local transit, as well as younger folks who are in a hurry and want the “seamless” connections that Brightline+ offers. According to Alfonso, the service is catching on. She told Railway Age: “We continue to experience increasing adoption of ‘Brightline+,’ our new door-to-door first and last mile mobility service, with 25% of passengers using Brightline+ in April compared to 22% in March.”

Brightline had shut down at the end of March 2020, shortly after the COVID virus hit. The previous service linking Miami, Fort Lauderdale and West Palm Beach returned on Nov. 8, 2021. In a press release dated Oct. 20, Brightline said that the return of service would also feature new food options at stations, changes in its app, new “touchless” features, and the new shuttles and ride service. The release said: “In addition to the Tri-County connectivity provided by Brightline, riders will now get to experience the new and first-of-its-kind branded door-to-door service. This will include a fleet of both private and third-party vendor vehicles supporting point-to-point service beyond the train and making a car-optional lifestyle possible.” Technically, transportation managers would call the service “curb-to-curb,” a distinction that would not make much difference to most riders.

Another release, from Octo. 26, unveiled Brightline+ and added more details: It would use electric vehicles, connecting rides would be offered at distances up to 5 miles from Brightline stations, and the fee for a private ride would be $10 (starting Dec. 1), while there would be no additional cost for shared ride shuttles on routes that Brightline would soon establish. Bikes and scooters were coming, too. According to the release: “The most significant enhancement made to Brightline since its inception, the service enables passengers to leverage an upgraded Brightline mobile app to plan, book and pay for their entire journey across a variety of eco-friendly transport modes, leaving a lower environmental impact.” The vehicles I rode, and others like them, were Teslas and operated by Circuit, a Brightline contractor. The Release also quoted Brightline President Patrick Goddard as saying: “Through Brightline+, we are solving the long-standing gaps of the first and last mile and, in the process, proudly supporting Miami’s growing tech sector.”

In addition to the quasi-taxis, there are a number of shuttles that connect with Brightline trains. All of them leave 10 minutes after connecting trains arrive, and rides to the customer’s point of origin to the station are scheduled through the Brightline app. The shuttles service two airports: Miami through the MIA Connector and Fort Lauderdale/Hollywood through the FLL Airport Connector, both of which run every day. The Port Everglades Cruiser and PortMiami Cruiser serve the cruise terminals Thursday through Monday during mid-day hours only. Another route, the Miami Beach Express, runs between Brightline’s Miami Central Station and Washington Street Miami Beach’s South Beach neighborhood, with stops at 5th Street, 11th Street and Lincoln Road.

There is also the Electric Shuttle in Fort Lauderdale, which operates in the downtown area and east toward the beach. In addition, there are now local shuttles serving downtown Miami, West Palm Beach and Palm Beach. Passengers can book shuttle rides on the Brightline app after booking the train segment for their trips. Alfonso told Railway Age: “Our Brightline shuttles are designed to solve the first and last mile needs of our customers and by providing a range of options to choose from we can make sure there is something that fits everyone’s needs.” She added that Brightline will offer similar shuttle services in the Orlando area when its trains start serving Orlando Airport next year.

According to Alfonso, “Fixed-route shuttles to Beaches, Ports and airports will remain free, as will local complimentary EV shuttles (Circuit-operated golf carts)” and private rides will be offered at no extra charge for premium-fare customers only. Coach passengers who pay what Brightline calls “smart fares” are charged $10.00 for a private-vehicle ride. The fare for each shared ride is $5.00 for all riders.

Brightline also introduced a program for cyclists: BrightBike in West Palm Beach. It started with 150 bikes and 13 locations (soon to be 17) where they can be parked. Visitors who travel on Brightline can rent a bike by the hour or the day, and local residents can sign up for a membership for $15 per month, with reciprocal privileges at CitiBike in Miami.

While Brightline touts Brightline+ and current trends indicate that it will succeed, the railroad is also busy with other activities. There are new stations coming to Boca Raton at the southern end of Palm Beach County, and to Aventura; the site of a large mall near the county line, where buses from Miami-Dade Transit and Broward County Transit connect.

Construction on the expansion to Orlando Airport is continuing, with an eye toward extending the line to Tampa. There is a change coming in the route west of Orlando, as Alfonso told Railway Age: “Along with a broad range of stakeholders, we have identified a solution now known as the Sunshine Corridor which contemplates two new stations and integrates Brightline’s intercity service with SunRail, through an east-west expansion. In addition to the airport, one new station will be located at the Orange County Convention Center and an alternative station will be placed near the original Disney Springs site, albeit not on land owned by Disney. Taken together, the three integrated stations provide access to the largest economic and employment centers in Central Florida and offer the best opportunity for the success of Brightline and SunRail.” We will report on this development soon in a separate story.