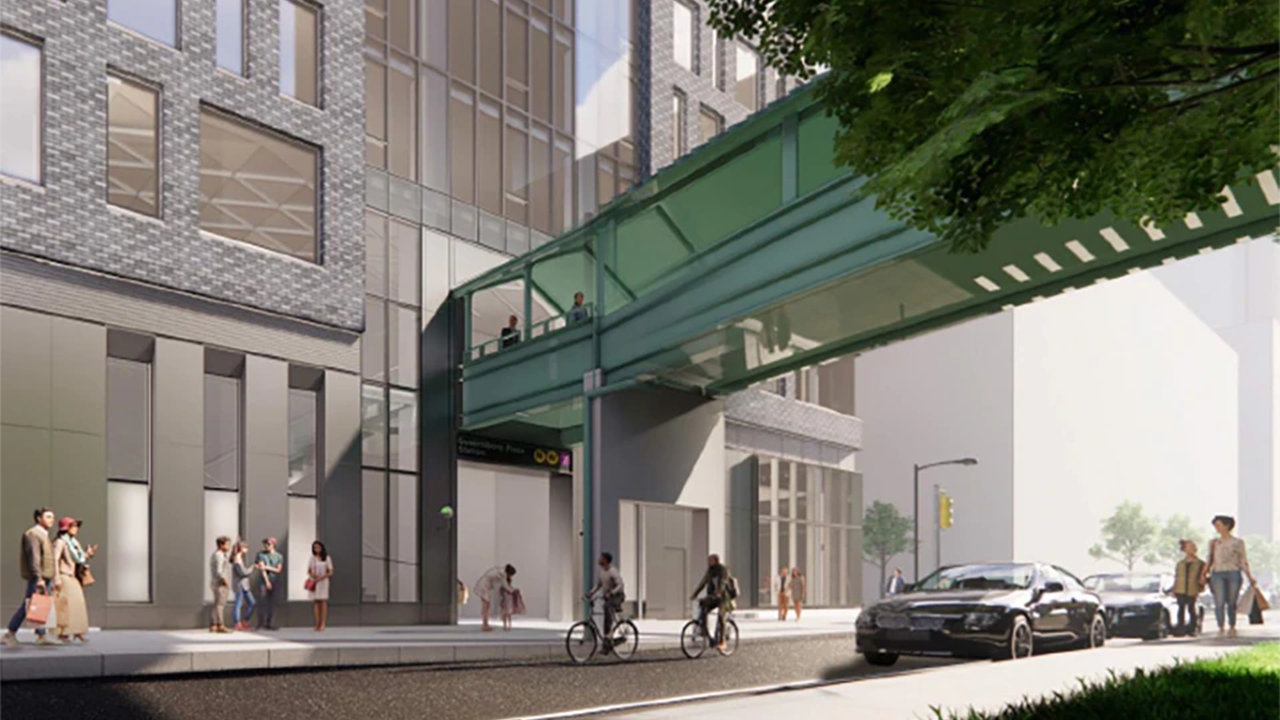 A second transit improvement bonus under ZFA will provide ADA access via a new elevator to the Queensboro Plaza subway station. (MTA)

The MTA and the Department of City Planning (DCP) on Aug. 4 announced that the City of New York has approved the second transit improvement bonus under Zoning for Accessibility (ZFA), which will provide ADA access via a new elevator to the Queensboro Plaza New York City Transit subway station, among the largest and busiest on the NYCT system.

This upgrade is the second transit improvement bonus approved by the City Planning Commission (CPC) under ZFA, which “enables developers to improve access to public transit in the busiest areas of the city in exchange for an increase in their building’s density.” This is the first use of ZFA outside of Manhattan and will bring a street-level elevator and a new, fully accessible entrance to the Queensboro Plaza station, which serves the 7, N and W lines, MTA says.

The street elevator installed under the agreement, MTA says, will “complement ongoing MTA capital work at the station,” including the installation of two elevators that make the station fully accessible–one that connects to the station’s mezzanine and another that connects the mezzanine to the platforms above.

Following a unanimous approval by the CPC on July 27, private developer of 25-01 Queens Plaza North, Grubb Properties, will build a new, fully accessible entrance inside the footprint of their building at no cost to the Authority or the City of New York, MTA says. This station entrance will allow customers to enter the station from either side of the wide boulevard at Queens Plaza for elevator access and provide a second accessible entrance into the station.

The new apartment building, on top of providing new ADA access to the station, will include more than 400 new homes, approximately 120 of them affordable, as well as an expanded stairway.

According to the MTA, Queensboro Plaza is one of more than 20 stations across all five boroughs with accessibility upgrades currently in progress under the Authority’s Capital Program. The station was identified by the City of New York as a “priority for accessibility upgrades” and included in the MTA Capital Plan with City support. In coordination with City partners, the MTA’s Capital project to make the station accessible will include one street elevator on the south side of Queens Plaza to the station mezzanine and one elevator from the mezzanine to platform level.

“New York depends on mass transit, and mass transit needs to be available and accessible to all New Yorkers,” said MTA Chair and CEO Janno Lieber. “The improvements at Queensboro Plaza demonstrate how the MTA is using every possible strategy to make the entire subway system ADA accessible.”

As of Aug. 4, St. Louis’s Loop Trolley service has returned after the “ill-fated” streetcar took its last ride on Dec. 29, 2019, following a service life of only 235 days.

Railway Age reported on Feb. 22, 2022, that the trolley was expected to make a comeback as early as June, due in large part to $36 million in Federal Transit Administration (FTA) funding, under a new plan in which Bi-State Development Agency will operate the cars as a contractor, without being financially responsible for the line itself. The Loop Trolley Co. is a not-for-profit corporation that continues to own the line.

The Loop Trolley will operate on Thursdays, Fridays, Saturdays and Sundays from 11 a.m. to 7 p.m. and will be free to ride during an initial three-month pilot program, which runs through Sunday, Oct. 30, 2022.

According to Loop Trolley, important maintenance projects, annual inspections and safety certifications will be performed on trolley vehicles this winter with operations set to resume in Spring 2023.

In response to a request for innovative concepts released in Nov. 2021 to partner with the private sector to “develop and deliver cutting-edge transportation solutions for the San Diego region in the next five to 10 years,” SANDAG has selected three concepts to advance to the second phase of the competitive process. Beep, Inc., Cavnue and Cordoba Corporation were each awarded a $50,000 stipend to develop their concepts further.

According to SANDAG, 18 companies submitted transportation service concepts leveraging new technology, transportation trends and project delivery methods. Each concept underwent an evaluation of its ability to advance the goals of the 2021 Regional Plan to “improve equitable access to travel choices and address climate goals.”

“The world class transportation system envisioned in the 2021 Regional Plan is now one step closer to being a reality,” said SANDAG Chair and Encinitas Mayor Catherine Blakespear. “We’re on track to implement innovative transportation solutions within the next decade that will truly serve our communities and connect the San Diego region like never before. We look forward to working with all our partners to make this happen.”

The three finalists, SANDAG says, were chosen for “the potential of their innovative concepts in addressing distinct aspects of the region’s transportation vision.” SANDAG will spend the next few months working with the teams and regional partners to better understand what implementation could look like in the San Diego region.

This fall, the finalists will publicly unveil their refined concepts to a SANDAG panel and up to three concepts could be selected to participate in a working partnership to fund, plan, design and construct the proposal.

The three finalists include:

Cavnue– In partnership with Globalvia, Meridiam, AECOM and Via, proposes a state-of-the-art, next generation managed lanes network to improve the speed and reliability of transit and shared mobility services. The technology-enabled infrastructure will improve safety, optimize the performance of existing roadways in the region, and prepare San Diego’s infrastructure for autonomous driving and connected vehicles. New on-demand transit services provide first-mile/last-mile connects and feed into the modernized managed lanes.

WMSC on Aug. 4 issued a statement regarding WMATA’s “failure to follow through on safety commitments” made by the Commission in April and May 2022.

The statement focused on the safety concerns in WMATA’s Friendship Heights Station Train Control Room (TCR), which were brought to the Authority’s attention in March 2022 and included protecting train control equipment, measuring air and environmental quality, cleaning the room and equipment, conducting preventive maintenance inspections in the room, identifying and addressing the source(s) of water intrusion, and addressing the ceiling deterioration in the room.

According to WMSC, WMATA “completed most initial actions related specifically to the Friendship Heights Station TCR by mid-May, with the exception of permanent air conditioning and duct replacement, but a follow-up in July and Aug. 2022 demonstrated that WMATA did not follow through on all safety commitments made in April and May 2022, including not continuing and completing special safety inspections of all TCRs and not beginning similar special inspections of other similar rooms [to the Friendship Heights TCR].”

WMATA, WMSC adds, also “committed to later conducting these safety inspections of similar rooms, such as Traction Power Substations and Communications Rooms.” And on Aug. 2, Rail Infrastructure Maintenance and Engineering (RIME) stated that “they had not taken any additional action to ensure inspections are conducted according to procedures and that safety issues are properly documented, communicated and resolved,” according to the WMSC statement. This, WMSC says, is despite the inspections and records reviews described, and WMATA’s safety department initial special inspections described, identifying safety issues and problems that had not been addressed as required by WMATA procedures.

After the WMSC’s follow up, WMATA’s Engineering and Architecture (ENGA) progressed a proposal on Aug. 2 for further internal WMATA review that would include new duct work and a new air handler for the Friendship Heights Station TCR and neighboring rooms while sealing and capping the existing significantly deteriorated duct work in place.

The WMSC statement, which can be viewed in full below, is the latest of several negative reports issued to WMATA.