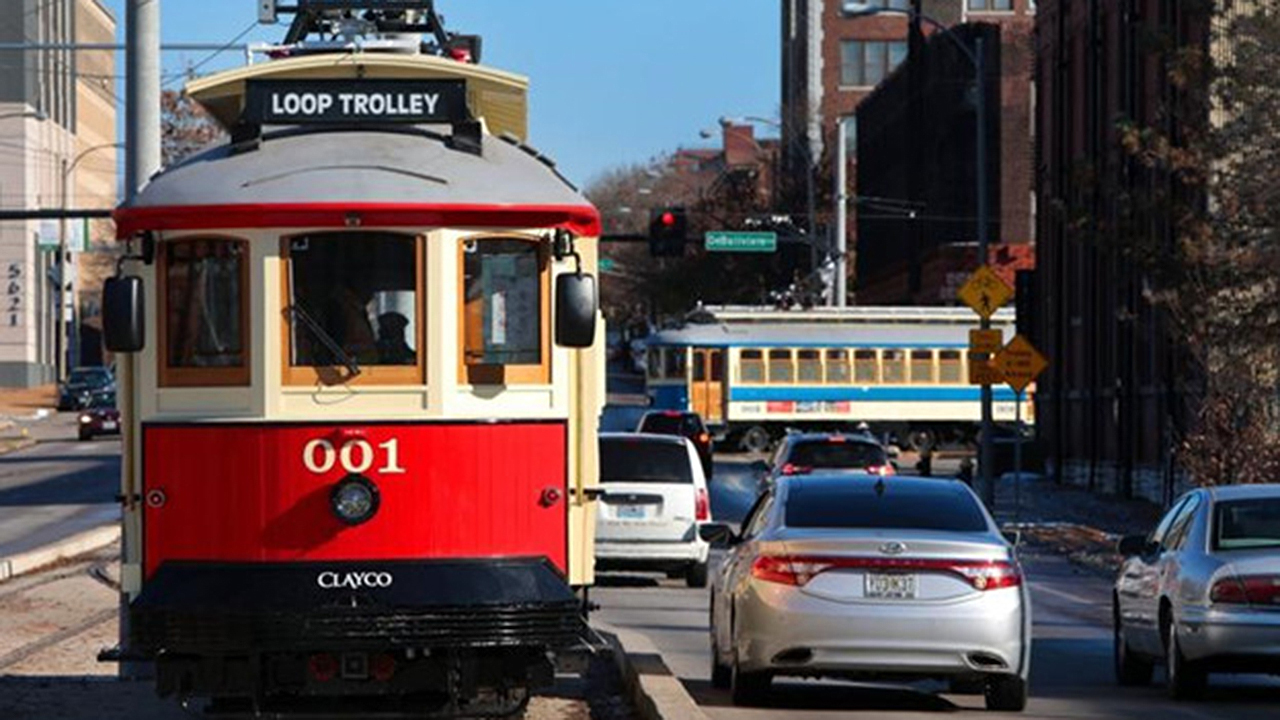 The Delmar Loop Trolley in St. Louis ran in its namesake neighborhood for 235 service days in late 2018 and 2019. Now the “trolley”—two cars operating with pantographs instead of trolley poles, despite their appearance as replicas of historic cars from the early 1900s—is expected back on Delmar and DeBaliviere Boulevards as early as this June for a return engagement; probably a limited one.

Railway Age reported the Loop Trolley’s largely unmourned demise at the end of 2019 in “A Streetcar Thought Undesirable.” It’s not that the cars and the line are thought to be more desirable now than they were three years ago, but giving roughly $36 million back to the Federal Transit Administration (FTA) is thought to be even less desirable. The agency had supported the line with an Urban Circulator grant and one from the Congestion Mitigation and Air Quality (CMAQ) program, and can claw the money back if the line does not start operating again. There was additional funding toward the $51 million startup cost from local government and private sources.

The new plan calls for Bi-State Development Agency to operate the cars as a contractor, without being financially responsible for the operation itself. The Loop Trolley Co., a not-for-profit corporation, will continue to own the line.

The route originated at the Missouri History Museum in Forest Park and ran for 2.2 miles. It was the first streetcar operation in St. Louis since 1966, not counting the MetroLink light rail operation, and there were two nearby transfer points to and from MetroLink. The streetcar operation was financed through a special taxing district in the neighborhood. Bi-State is now willing to run it, but appeared to take that step reluctantly.

Mark Schlinkmann set the scene as he reported on December 10, 2021 in the city’s newspaper, the Post-Dispatch: “The Loop Trolley, which shut down at the end of 2019 amid financial and operational problems, could start up again next year, but a decision has yet to be made. That’s the upshot of a meeting Thursday [December 9] of the board that oversees the special sales tax district that has committed to generate revenue for the defunct trolley line straddling the St. Louis-University City border.”

One of the Loop Trolley Co. Board members is Joe Edwards, who owns several neighborhood businesses and spent more than two decades pushing for the line to be built and operated. Schlinkmann reported: “‘It might be three or four days a week,’ Edwards said. He said the idea would be to use sales tax revenue collected since the shutdown and ongoing proceeds from the 1% tax.”

Bi-State made its decision on Feb. 18. That day, Schlinkmann reported: “The Bi-State Development Agency board’s decision to run the trolley on a contract basis came at the request of its CEO, Taulby Roach, and St. Louis Mayor Tishaura O. Jones, who since December has chaired the trolley’s sales tax district.” The June 1 date, which was set as a target for resuming service, was requested by the Regional FTA Administrator. In January 2020, the Bi-State board had turned down a request to keep the trolley going shortly after it shut down, but the result will be different this time.

An FTA official warned in December 2021 that the agency might demand repayment of the grant money, which apparently prompted Bi-State to restore the operation. Schlinkmann reported: “‘I’m not going to say that it’s a super-sound project,’ Roach said Friday [Feb. 18] of the trolley, which had ridership far below expectations in its lone year of operation. ‘Look, its track record speaks for itself.’ But he said defaulting on the tens of millions of dollars in federal grants used to help build the $51 million line could hurt efforts by the metro area and Bi-State itself to get other federal money in the future.” Bi-State wants to build a north-south line for its Y-shaped MetroLink light rail system, and can be expected to apply for a New Starts grant from the FTA.

A Feb. 18 report by Shahla Frazan on local NPR station KWMU gave additional background: “With a federal directive to restart the Loop Trolley less than two weeks away, a regional agency has stepped in to take control of the project. Commissioners at the Bi-State Development Agency, which operates the Metrolink and bus systems in the St. Louis region, voted Friday to manage the Loop Trolley through June 2025.” Frazan’s report highlighted Roach’s concerns: “President and CEO Taulby Roach called it a ‘tough and troubled project’ during Friday’s board meeting, but he agreed the region cannot risk losing future federal funding. ‘Avoiding a federal default is key to the future, not just of transit in the region, both in Missouri and Illinois, but also for Bi-State Development,’ Roach said. ‘I’m gritting my teeth, just like everyone else. I’m trying to be very upfront about the difficulty of this project, but I’m also trying to point everyone to a long-term vision of transit.’” March 1 is the deadline to devise a plan to run 32 hours per week through June 30, 2025.

The new arrangement is similar to the old one in some respects, but different in others. The line would operate Thursdays through Sundays (it never operated on the other three days) for a limited service day; probably eight hours, since the required operation is 32 hours per week. Fare collection had been problematic before, and farebox revenue was less than 5% of the expected level during the line’s previous incarnation, so rides will be free this time. According to Schlinckmann, Roach said that the next steps will be negotiating with FTA officials and assessing the line’s cars and other assets: “‘They have to be assessed within the standards of Metro Transit’ and that means our equipment works and does not break down,’ he said. ‘We still need to do a really rigorous assessment and our team will need time to do that.’”

Joe Edwards first proposed streetcar service in the Delmar neighborhood in 1997. The Loop Trolley Co. was created in 2001, and by 2012, it looked like service would start in 2014. During the next several years, the potential operation was hit with loss of grants, other funding issues, two lawsuits, and rising costs. It finally started running on Nov. 16, 2018 (the opening was delayed one day on account of snow) and broke down for the first time on Dec. 10. It would not be the last time. In an ironic twist, the last car that ran on the last day of service, Dec. 29, 2019, broke down on its final run. There was service again briefly in July 2020, but the line has been dormant since.

Railway Age reported the line’s tragic history in greater detail when it shut down at the end of 2019. Not only did it suffer from one incident of bad luck after another, but it also appears that service was not executed or operated well. Longtime streetcar advocate and historian Jeffrey B. Marinoff, who lives in New Jersey and blogs about streetcar news, said in a post: “Now if they’d only take some friendly suggestions and advice from knowledgeable people.” It does not appear that much more needs to be said.

Maybe it would have helped if the St. Louisans had taken the advice that Marinoff and others who know about what streetcars can offer, but there is no way to know for sure. What is known: The prospect for a return engagement for the Delmar Loop Trolley looks good. It will probably be a limited engagement: Thursdays through Sundays with a limited span of service for a three-year run.

However “undesirable” the line may seem to St. Louis officials, if running it on a limited basis for three years prevents having to turn millions of dollars back to the FTA, that might be “desirable enough” for now. If you want to ride a streetcar line that started out with good intentions but had trouble making the grade, you might have another chance in St. Louis. Don’t take too long, though. It does not look like the Delmar Loop Trolley will ever become a popular fixture in the Mound City.