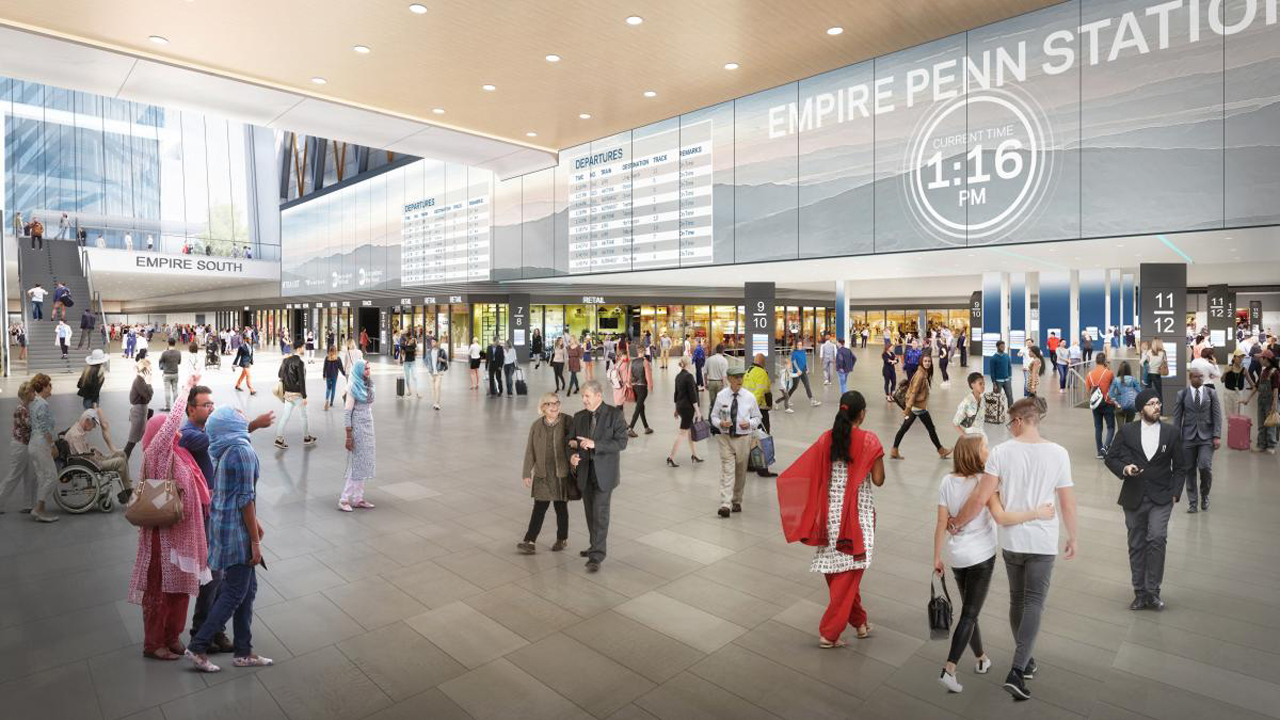 The single-level alternative (rendering above) would transform “Penn Station into an open, single-level concourse, eliminating all low ceiling heights and simplifying entry and exit routes from trains and the street level, while also creating new large circulation areas bigger than the Great Hall of Grand Central Terminal,” according to MTA.

The reconstruction project is part of the $16 billion Empire State Complex, which also includes the Moynihan Train Hall (opened Jan. 1, 2021) and the acquisition of property south of Penn Station to expand it and construct eight additional tracks, increasing train capacity by 40%.

MTA, Amtrak and NJ Transit examined a number of options for Penn Station reconstruction, following a yearlong “re-envisioning” initiative, supported by FXCollaborative and WSP. They selected a two-level alternative and a one-level alternative. The public may now comment on both.

Key elements of both alternatives include:

• Increasing concourse space to reduce congestion and handle future growth.
• Unifying station operations, such as ticketing, waiting areas and cleaning services for all railroads.
• Adding more stairs, escalators and elevators “to spread riders along the narrow platforms, resulting in a total of 30 new ways to reach platforms,” according to MTA.
• Providing full accessibility in accordance with the Americans with Disabilities Act, and introducing new retail opportunities.

The two-level alternative would leverage the existing “two-level boarding configuration while improving existing Penn’s layout, creating a central atrium, and repurposing some of Amtrak’s space for NJ Transit’s commuters and operations,” according to MTA. “This alternative can be combined with a grand new entrance on Eighth Avenue and the light-filled West Train Hall in the space currently occupied by Madison Square Garden’s 5,600-seat Hulu Theater by purchasing the theater from MSG, increasing sightlines and better movement throughout the train hall. The two-level alternative could also incorporate new vertical access points to platforms, significantly widened concourses throughout, and new entrances at sidewalk level along Eighth Avenue.”

The single-level alternative would transform “Penn Station into an open, single-level concourse, eliminating all low ceiling heights and simplifying entry and exit routes from trains and the street level, while also creating new large circulation areas bigger than the Great Hall of Grand Central Terminal,” according to MTA. “This alternative would remove 40% of the upper level so that all the public concourses could be two or three stories high, resulting in a more open, airy space throughout the station with better sightlines and more direct access to both tracks and platforms, and to station entrances/exits.”

This option would also feature “a spacious, light-filled mid-block Train Hall with prominent new entrances on 33rd and 31st Streets near Seventh Avenue. The hall would bring in natural light with a new multi-story atrium built in the former taxiway between Madison Square Garden and 2 Penn Plaza, which has been closed for security since Sept. 11, 2001. This alternative moves MSG loading off 33rd Street, allowing 33rd Street to become a pedestrian-oriented shared street.”

“NJ Transit looks forward to continuing to work with our partners at Amtrak and the MTA to advance expanding and improving Penn Station to enhance the transit experience for our customers,” NJ Transit President and CEO Kevin S. Corbett. “Rail ridership will ultimately return to pre-pandemic levels, and we need a Penn Station that provides the space, functionality and modern amenities that accommodates future growth….”

“As we work with our partners to advance the Gateway Program’s Hudson Tunnel Project, developing a vision for expanding and transforming Penn Station is the next big step we must take,” Amtrak Board Chair Tony Coscia said.