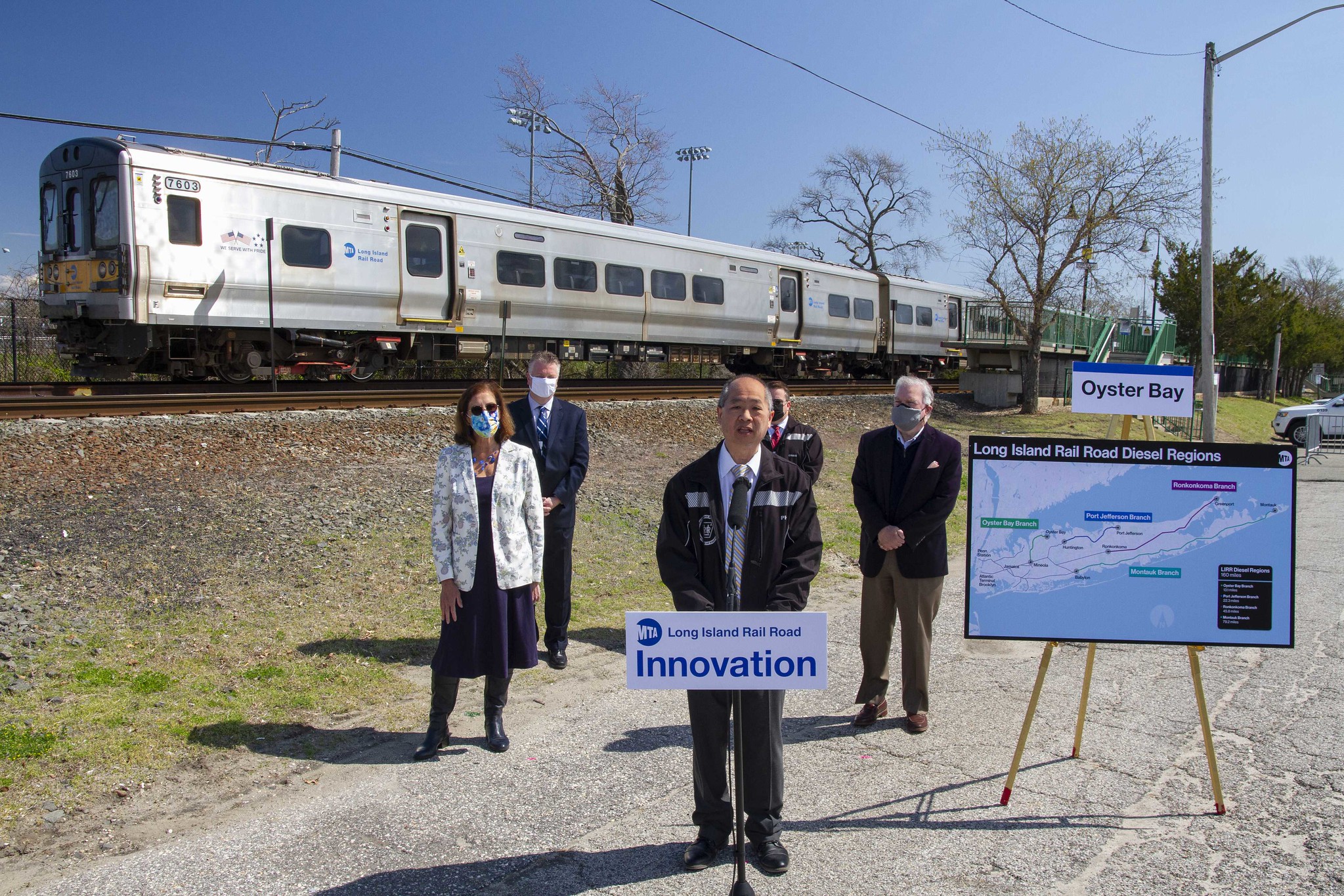 LIRR President Phil Eng (at microphone): “Embracing new technology might allow us to essentially electrify the entire railroad without the need for billions of dollars in massive capital investments.”

If all goes as planned, in about one year, MTA Long Island Rail Road will be testing a prototype “BEMU” (battery-electric multiple unit) that operates on third-rail power or batteries on the 13-mile, non-electrified Oyster Bay Branch. The program, a venture with Alstom, will be North America’s first test-of-concept of this application on commuter railcars.

LIRR’s prototype BEMU will be a two-car Bombardier M7 married pair, with four of the car-set’s eight traction motors (one per axle), which normally draw power from 750 VDC third-rail, retrofitted with battery propulsion. LIRR had begun discussions with Bombardier on the project prior to Alstom’s acquisition of Bombardier; the program is now an LIRR/Alstom venture.

The $850,000 program has several steps; LIRR and Alstom will commence work within the next month. In the first phase, expected to last eight months, technicians will evaluate specifications for batteries and where they could be placed aboard M7 cars. They will study the physical characteristics of the Oyster Bay Branch and the Port Jefferson Branch, including grades and distances between stations, and evaluate sites for recharging stations. Upon successful completion of the analysis, technicians will retrofit one M7 pair to operate on battery power in deadhead service (without passengers) on the Oyster Bay Branch between East Williston and Oyster Bay. The outcome of these tests will enable LIRR to evaluate the number of M7 car-sets that could be retrofitted, and when and which trains in revenue service could be converted to BEMUs.

“Part of the analysis will tell us if we need additional charging stations for longer distances, how fast can a battery recharge in a 60-second station stop, and if we decide to go further, how many charging stations would be required,” LIRR President Phil Eng said. If the test period without passengers is successful, LIRR said it would then be able to operate revenue trains, providing passengers with a one-seat ride between Oyster Bay and the railroad’s terminals at Penn Station New York and/or Atlantic Avenue in Brooklyn.

In addition to the Port Jefferson Branch, LIRR’s two other non-electrified branches—Montauk and Ronkonkoma—would be evaluated in the future, as well as the feasibility of the battery technology and the ability to retrofit existing trains. “If we have the ability to improve service on the Oyster Bay Branch, that [will] improve service on [the other branches],” Eng noted. Longer-term, if the pilot is successful, “embracing new technology might allow us to essentially electrify the entire railroad without the need for billions of dollars in massive capital investments,” he added. “People have been talking about extending electrification to various segments of the railroad for generations. The MTA is already transforming the LIRR through East Side Access and Main Line Third Track; this is potentially a no-less-profound transformation for the rest of the railroad. Everybody benefits.”

This program will be the first test of hybrid battery/third-rail-electric commuter railcars in North America. The technology is already in use in North America, albeit on much-smaller light rail vehicles and streetcars that have dramatically different operating characteristics and requirements than commuter rail, in terms of tractive effort, maximum operating speed (typically 80-100 mph) and acceleration/braking curves. It’s also in use overseas in regional rail applications, but those vehicles are still comparatively less massive than North American FRA-compliant commuter railcars.

If successful, battery-electric technology “could be deployed anywhere diesel-powered commuter trains operate on the LIRR or Metro-North,” officials said. “If batteries succeed on the LIRR as they have for light rail in Europe and Asia, the use of battery-powered railcars promises over the long term eliminate the need for transfers to a separate diesel fleet to reach the railroad’s expansive unelectrified regions extending 160 miles from East Williston to Oyster Bay, Huntington to Port Jefferson, Babylon to Montauk and Ronkonkoma to Greenport.” BEMUs “could open the possibility that in the years and decades ahead,” the MTA could totally replace its sometimes-problematic diesel fleet with “quiet, reliable, zero-emission electric railcars offering seamless transfer-free travel across the railroad.”

“In the near term, conversion of a fraction of the 836-car M7 electric fleet to operate with battery power on even just one of the railroad’s non-electrified branches would allow the LIRR to consolidate its diesel fleet on remaining non-electrified branches, enhancing the frequency of diesel service there and lengthening trains,” officials noted. “In recent years, the LIRR has seen such a surge in seasonal demand for diesel service that it has had to lease additional cars from Maryland’s MARC system.”

“Battery technology is improving year after year in ways we see every day from smartphones to automobiles, so I challenged private industry to use improving battery technology to benefit railroad customers,” Eng noted. “This is ingenuity at its best.”

The LIRR is sharing program details with Metro-North. “This is an exciting technology with implications for Metro-North,” said Catherine Rinaldi, President of MTA Metro-North Railroad. “We will be working with the LIRR as this technology test advances.”

“We’re proud to be partnering with the LIRR, the largest and busiest commuter railroad in North America, to test one of our efficient and eco-friendly alternatives to diesel trains,” said Jérôme Wallut, President, Alstom Americas. “Alstom’s battery technology and range of green-traction solutions are helping railroads around the world meet their environmental commitments while delivering sustainable mobility solutions for generations to come.”

The LIRR, established in the 1830s, electrified major segments with third rail between 1900 and the early 1930s, and replaced steam locomotives with diesel-electric units between 1926 and 1955. The Oyster Bay Branch was electrified as far as East Williston in 1934. Plans for extending that electrification never materialized amid the Great Depression and World War II and were never resurrected. Estimates have placed completing electrification of the Port Jefferson Branch alone at close to $4 billion.