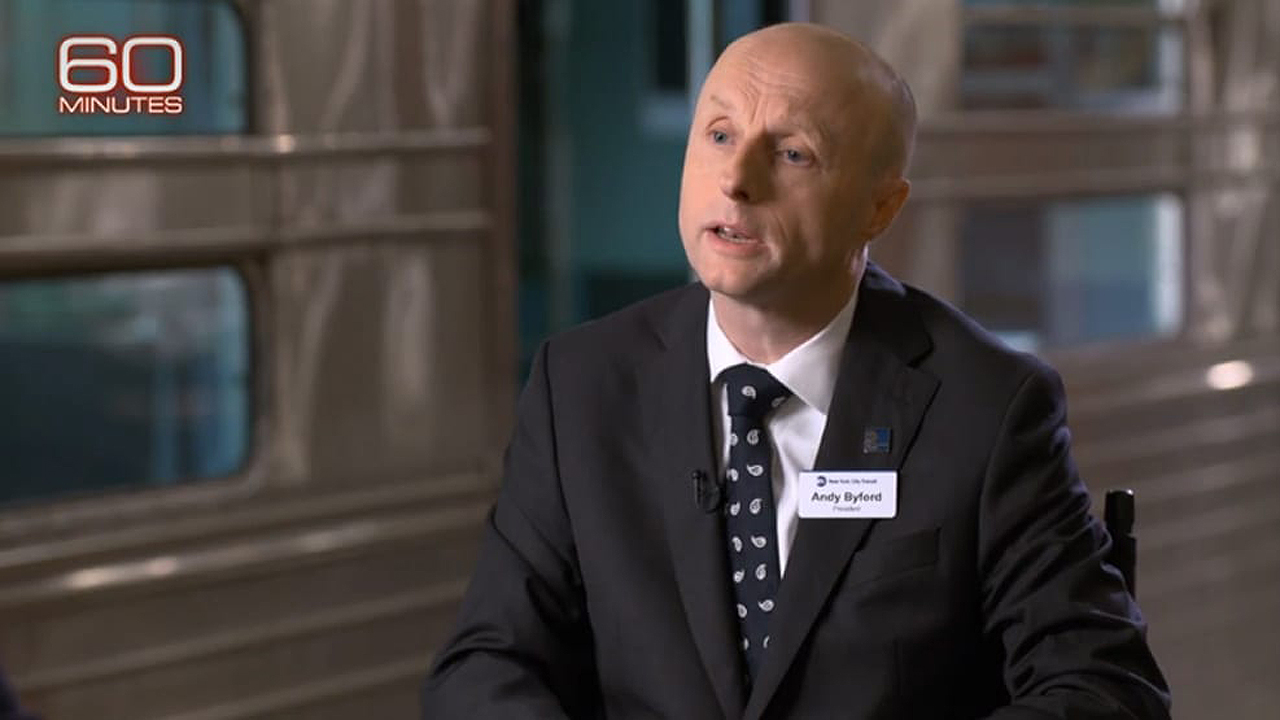 I usually have reason to be critical of non-rail-industry-trade-publication reports on railroads or rail transit. The reporters rarely understand the subject matter, and they frequently describe rail technology in terms that makes my hair stand on end—and I’ve been bald (“follically challenged”, in euphemistic terms) since about 1985. Or, they have an agenda. Not so with the Oct. 21, 2018 CBS 60 Minutes report on New York’s subway system.

Granted, the title and tag line are a bit sensationalist: “Why has the New York City subway gone off the rails? 60 Minutes goes inside one of the busiest subway systems in the world to find out why the trains aren’t running on time.” But that’s OK. Headlines are supposed to grab your attention. What’s important is whether the story—the “meat”—has real substance, facts and figures, and—in the current political climate, when “fake news” is used more times than Carter’s got liver pills—truth.

60 Minutes Correspondent Bill Whittaker, Producer Marc Lieberman and Associate Producer Ali Rawaf have given those of us who toil in this much-misunderstood, much-maligned industry a reason to smile, to breath a sigh of relief and say finally, somebody got it right.

You can see the entire segment here, as well as some extra online-only content, but here’s the lead. It’s marvelous:

“New York City is a place where attitude and strong opinions are in the DNA. New Yorkers might not agree on much, but there is one thing on which millions of them do agree: the subway is a mess. Trains are packed, breakdowns and delays are routine, some say it’s gone off the rails. After an actual derailment last year injured more than 40 people, the governor declared a state of emergency. When it first opened more than a century ago, the New York City subway was considered a feat of American engineering. Now it’s another example of the country’s ailing infrastructure. Luckily, there’s a man with a plan, an Englishman in New York who proposes the city’s largest infrastructure expenditure since the 1950s.”

That Englishman is MTA New York City Transit President Andy Byford, a brilliant rail transit pro with a long track record (pun intended) of success who also happens to be a regular bloke, accessible and down to earth, soft-spoken, almost to the point of being disarming. Wearing a name tag that tells exactly who he is, Andy rides the trains, talking to riders and employees, even picking up a piece of trash that some slob threw on a station platform. You will see this in the 60 Minutes story. It wasn’t a performance for the cameras (unlike the “Unholy Trinity,” see below). It’s who Andy is. Are you wondering, how can this genteel Brit survive in a place like New York City? Don’t. He’s just being himself. No pretenses. And only one agenda: Fix what’s broken.

I give 60 Minutes a lot of credit for only touching upon the ego-driven political battles that swirl around the subway’s problems. There’s a brief description of the “political squabbling” involving New York Gov. Andrew Cuomo and Mayor Bill de Blasio (no mention of the third member of the unholy triumvirate, MTA Chairman Joe Lhota). A brief clip is all these bloody snollygosters deserve. 60 Minutes chose to focus on the people who try their best to run the trains safely and on time, and on the man who’s trying to Fast Forward a plan to bring the 114-year-old subway back to world-class status.

In any case, here’s my take on New York’s subway politics:

New York City has interesting nicknames: The Big Apple. The Capital of the World. The City of Dreams. The City So Nice, They Named It Twice. The City That Never Sleeps. Empire City. Fun City. Gotham.

“Fun” and “Nice” can be taken with a grain of salt in relation to New York City Transit. The subway system needs a massive infusion of capital—$40 billion, which NYCT President Andy Byford has spelled out in his ambitious Fast Forward plan. Among other projects, Fast Forward envisions upgrading the entire signal system to CBTC within 10 years—kind of like John F. Kennedy’s May 1961 challenge to Congress of landing a man on the moon by 1969.

NASA fulfilled Kennedy’s vision with technology that in 1961 was still on the drawing board. CBTC in 10 years? It’s proven, available and in service at NYCT. If anyone can get it done, it’s Byford.

The “Fun” part is paying for it—who should pay, and in what proportion. The debate is hotly political, hot enough to cook The Big Apple to its core. It involves New York’s “Unholy Trinity”: Governor Andrew Cuomo, Mayor Bill de Blasio and MTA Chair Joe Lhota.

These guys honestly can’t stand each other. They’ve created an egocentric landscape that Byford, a first-rate transit pro, has to negotiate skillfully and forcefully if he’s going to get anything done.

Imagine dealing with this scenario:

Cuomo, a Democrat and New York City native, has Presidential aspirations (like his father, the late former N.Y. Gov. Mario Cuomo). He has taken credit for pushing phase one of the Second Avenue Subway to completion. Lhota resigned as MTA Chair to run for mayor in 2013 on the Republican ticket. De Blasio, a Democrat, crushed Lhota in that election with 73% of the vote. De Blasio says “Albany” (Cuomo) should pay to fix the subways. Lhota, still licking his election wounds, publicly admonishes de Blasio for passing the big bucks.

What you have are three egos who aren’t amigos, and who rarely agree on anything.

Byford, at a September MTA board meeting, spoke of an “intensifying advocacy campaign” for de Blasio, Cuomo and legislators to fund Fast Forward.

“God bless him,” de Blasio responded. “He’s a good man from everything I’ve seen, and I think the Fast Forward vision is a good one. But I’m not sure he understands that the City of New York, given all our other obligations, is not in the position to provide that financing. It’s solely up to Albany.”

The members of the Unholy Trinity need to individually stop playing God, leave their egos in their soiled political sandbox and collectively figure out how to fund Andy Byford’s Fast Forward program.