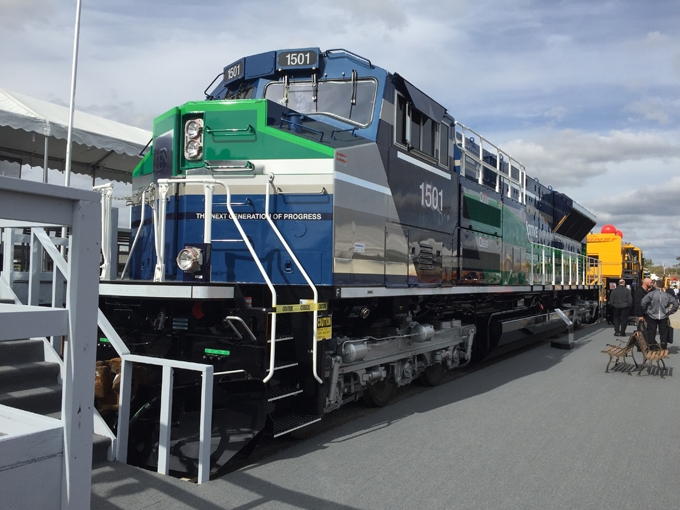 Railway Age Editor-in-Chief William C. Vantuono spoke with EMD Manager, System Engineering Scott Swenson about the locomotive’s features and conducted a walk-around video, which can be viewed below.

The SD70ACe-T4 is powered by an all-new, 4,400-traction-hp, 12-cylinder, four-stroke EMD-developed 1010 diesel engine. EMD isn’t providing many technical details of how it attained Tier 4, only saying that it has done this without the use of urea as an aftertreatment.

The 1010 is a radical departure from EMD’s traditional two-stroke engine, which traces its roots to the circa-1939 567, 645 and 710 series engines that immediately preceded it. It is not based on a Caterpillar engine, though, according to Progress Rail President and CEO Billy Ainsworth, it “combines the engineering expertise of Progress Rail, Electro-Motive and Caterpillar.” EMD is a wholly owned subsidiary of Progress Rail Services Corp., a Caterpillar company. EMD’s other Tier 4 offering, the F125 Spirit high-speed passenger locomotive, utilizes a 4,700-hp Caterpillar C175-20 engine.

The SD70ACe-T4 “includes a high performance AC traction system, isolated powertrain, radial bogies, individual axle control, advanced electronics and an enlarged cab designed for crew ergonomics and safety,” EMD said. “With the reliability, maintainability and safety customers expect from EMD locomotives, benefits of the SD70ACe-T4 include improved asset utilization, optimized efficiency and performance and lower infrastructure and maintenance costs.” EMD added that it plans to have these locomotives available in the second half of 2016, “which is earlier than previously announced.”

“In 2010, we acquired Electro-Motive, a world leader in diesel electric locomotives, having delivered more than 60,000 locomotives worldwide,” Ainsworth noted. “Over the past five years, our goal has been to take the EMD locomotive product line to the next level in terms of innovation and sustainability. The long and diverse manufacturing history of Caterpillar, coupled with the depth and breadth of our combined engineering efforts make for impressive products. As we look to the future, our goal is to provide a full range of product and service solutions, targeted at improved performance in terms of sustainability, fuel savings and lower emissions—all of which will provide lasting benefits for our valued customers.”