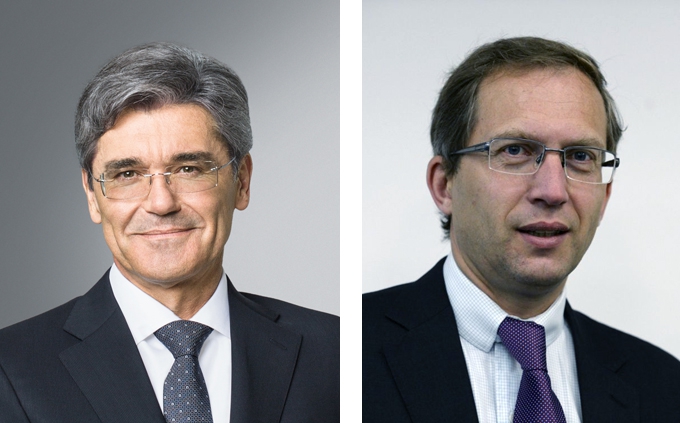 It’s official: Siemens AG and Alstom SA have signed a Memorandum of Understanding “granting exclusivity to combine mobility businesses in a merger of equals.” The combination is largely viewed as a move to remain competitive in a global market in which Chinese rolling stock manufacturers have gained considerable market share. Based on how the merged company, “Siemens Alstom,” will be structured and named, Siemens is the lead company, with 6 of 11 board members.

The Wall Street Journal reported that the two companies were in merger talks on Sept. 23. This followed numerous reports in the French press on Sept. 21 and 22, “most (correctly) suggesting a deal would be announced on Sept. 26,” according to International Railway Journal Senior Editor Keith Barrow. ”Alstom finally came clean in a statement issued on Friday evening, Sept. 22 (Paris time) that it was in talks with Siemens,” which IRJ reported.

At the time, Siemens had been in talks with Canada’s Bombardier, Inc. about merging their railway businesses. Siemens did not comment on whether its discussions with Alstom meant talks with Bombardier had stalled. But according to reports, there will be no further discussions with Bombardier. That development, plus preliminary import duties the U.S. Commerce Department levied on Bombardier’s C Series jetliner, caused the company’s stock to drop the most in almost two years.

Bombardier Transportation announced on Sept. 25 that the company’s Management and General Works Council signed a general company agreement formalizing the transformation strategy for its German sites that will result in 2,200 job losses.

Following is the official announcement from Siemens and Alstom, released Sept. 26 at 3:55 EDT:

Today, Siemens and Alstom have signed a Memorandum of Understanding to combine Siemens’ mobility business including its rail traction drives business, with Alstom. The transaction brings together two innovative players of the railway market with unique customer value and operational potential. The two businesses are largely complementary in terms of activities and geographies. Siemens will receive newly issued shares in the combined company representing 50% of Alstom’s share capital on a fully diluted basis and warrants allowing it to acquire Alstom shares representing two percentage points of its share capital.

“This Franco-German merger of equals sends a strong signal in many ways. We put the European idea to work and together with our friends at Alstom, we are creating a new European champion in the rail industry for the long term. This will give our customers around the world a more innovative and more competitive portfolio,” said Joe Kaeser, President and CEO of Siemens AG. “The global marketplace has changed significantly over the past few years. A dominant player in Asia has changed global market dynamics, and digitalization will impact the future of mobility. Together, we can offer more choices and will be driving this transformation for our customers, employees and shareholders in a responsible and sustainable way,” Kaeser added.

“Today is a key moment in Alstom’s history, confirming its position as the platform for the rail sector consolidation. Mobility is at the heart of today’s world challenges. Future modes of transportation are bound to be clean and competitive. Thanks to its global reach across all continents, its scale, its technological know-how and its unique positioning on digital transportation, the combination of Alstom and Siemens Mobility will bring to its customers and ultimately to all citizens smarter and more efficient systems to meet mobility challenges of cities and countries. By combining Siemens Mobility’s experienced teams, complementary geographies and innovative expertise with ours, the new entity will create value for customers, employees and shareholders,” said Henri Poupart-Lafarge, Chairman and Chief Executive Officer of Alstom SA. “I am particularly proud to lead the creation of such a group that will undoubtedly shape the future of mobility.”

The new entity will benefit from an order backlog of €61.2 billion, revenue of €15.3 billion, an adjusted EBIT of €1.2 billion and an adjusted EBIT-margin of 8.0%, based on information extracted from the last annual financial statements of Alstom and Siemens. In a combined setup, Siemens and Alstom expect to generate annual synergies of €470 million latest in year four post-closing and targets net-cash at closing between €0.5 – €1.0 billion. Global headquarters as well as the management team for rolling stock will be located in Paris area and the combined entity will remain listed in France. Headquarters for the Mobility Solutions business will be located in Berlin, Germany. In total, the new entity will have 62,300 employees in over 60 countries.

The businesses of the two companies are largely complementary. The combined entity will offer a significantly increased range of diversified product and solution offerings to meet multi-facetted, customer-specific needs, from cost-efficient mass-market platforms to high-end technologies. The global footprint enables the merged company to access growth markets in Middle East and Africa, India, and Middle and South America where Alstom is present, and China, the United States and Russia, where Siemens is present. Customers will significantly benefit from a well-balanced larger geographic footprint, a comprehensive portfolio offering and significant investment into digital services. The combination of know-how and innovation power of both companies will drive crucial innovations, cost efficiency and faster response, which will allow the combined entity to better address customer needs.

The Board of Directors of the combined group will consist of 11 members and will be comprised of 6 directors designated by Siemens, one of whom being the Chairman; 4 independent directors; and the CEO. In order to ensure management continuity, Henri Poupart-Lafarge will continue to lead the company as CEO and will be a board member. Jochen Eickholt, CEO of Siemens Mobility, shall assume an important responsibility in the merged entity. The corporate name of the combined group will be Siemens Alstom.

The envisaged transaction is unanimously supported by Alstom’s board (further to a review process of the preparation of the transaction by the Audit Committee acting as an ad hoc committee) and Siemens’s supervisory board. Bouygues fully supports the transaction and will vote in favor of the transaction at Alstom’s board of directors meeting and at the extraordinary general meeting deciding on the transaction to be held before July 31, 2018, in line with Alstom board of director decision. The French State also supports the transaction based on undertakings by Siemens, including a standstill at 50.5% of Alstom’s share capital for four years after closing and certain governance and organizational and employment protections. The French State confirms that the loan of Alstom shares from Bouygues SA will be terminated in accordance with its terms no later than 17 October 2017 and that it will not exercise the options granted by Bouygues. Bouygues has committed to keep its shares until the earlier of the extraordinary general meeting deciding on the transaction and July 31, 2018.

In France, Alstom and Siemens will initiate Works Councils’ information and consultation procedure according to French law prior to the signing of the transaction documents. If Alstom were not to pursue the transaction, it would have to pay a €140 million break fee. The transaction will take the form of a contribution in kind of the Siemens Mobility business including its rail traction drives business to Alstom for newly issued shares of Alstom and will be subject to Alstom’s shareholders’ approval, including for purposes of cancelling the double voting rights, anticipated to be held in the second quarter of 2018. The transaction is also subject to clearance from relevant regulatory authorities, including foreign investment clearance in France and anti-trust authorities as well as the confirmation by the French capital market authority (AMF) that no mandatory takeover offer has to be launched by Siemens following completion of the contribution. Closing is expected at the end of calendar year 2018. The transaction was prepared under the review of an ad-hoc committee.