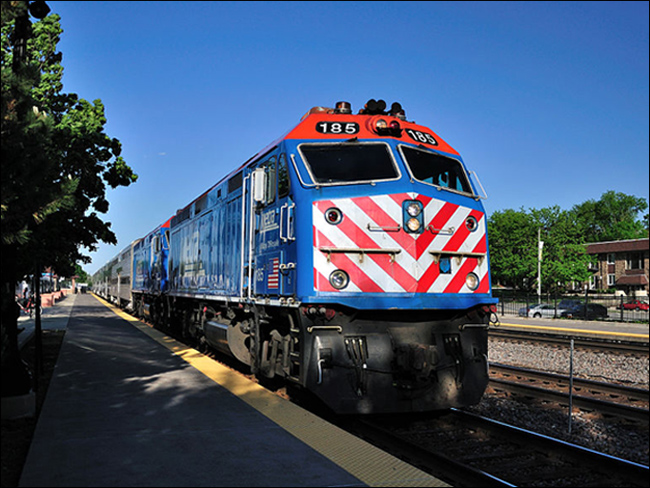 Metra unveiled a special wrap on one of its F40PH locomotives, commemorating 40 years of continuous passenger service for the power mainstay of the Chicago agency’s passenger fleet.

“These F40PHs have been in commuter service longer than any other locomotive type in North America,” said Orseno. “Their longevity is both a tribute to the excellence of our maintenance program and a commentary on the need to provide public transportation systems with a level of capital funding that allows us to continually renew our assets.”

The wrap replicates the locomotive’s original RTA (Regional Transportation Authority) color scheme, since Metra had not yet been created when the first F40PH entered service in Chicago on Sept. 30, 1977. The RTA’s Commuter Rail Division, which later became Metra, began taking delivery of the first 28 units in 1977. Orders were subsequently placed four more times for a total of 115 locomotives, with the last delivered in October, 1989. Over the years, Metra added three ex-Amtrak F40PHs, for a roster total of 118, the largest such fleet.

The wrap, paid through the Shore Line Interurban Historical Society, was funded through private donors and a contribution by Progress Rail Corp.

“I’m not sure anyone could have predicted in 1977 that the locomotives then being delivered would still be in everyday use after four decades. Think about that – 40 years is a long time ago,” said Nelson. “How many people drive a 40-year-old car several hundred miles every day at speeds up to 79 miles per hour? The fact that this locomotive and its contemporaries continue to perform the same service for which they were built four decades ago is a testament to those who designed, constructed, operate and maintain them.”

The former Electro-Motive Division (EMD) of General Motors in LaGrange, Ill., developed the F40PH for passenger service. Based on the successful GP40-2 four-axle freight model, the F40PH (“F” for full-width carbody, “P” for passenger and “H” for head-end power”) developed 3,000 hp from EMD’s 645E3 V16 two-stroke diesel engine, geared for a top speed of as much as 110 mph. More than 500 were built for the North American market. Metra currently operates a total of 149 locomotives, including 28 of the original F40PH units. The last 30 of Metra’s fleet, the F40PHM-2, were built with a unique sloped cab that earned the nickname “Winnebago”.

“The stop-start nature of commuter service wears very hard on a locomotive,” said Carlson. “The fact that Metra’s Mechanical Department has maintained these locomotives to a standard that enables Metra to maintain a 95% on-time performance record month after month is impressive to say the least.”

Metra’s Bill Badurski, who currently oversees capital projects in Metra’s Mechanical Department, has been with the F40PH since the beginning, having spent part of his early career at EMD. He served as EMD’s training center instructor, teaching railroads that had purchased the F40PH how to maintain them.

“Forty years later, I am now charged with keeping these same units running for the foreseeable future,” Badurski said. “It’s pretty amazing when you think about how many miles of service these engines have seen.”

The transit operator has rehabbed most of the F40PH fleet, at its 47th Street shop. Beginning in 2008, 50 of the units underwent a rebuilding by Progress Rail Services at their Mayfield, Ky., facility. In 2015, a second overhaul program for the F40PH and F40PHM models started at Progress Rail’s Patterson, Ga., plant.

“These locomotives came into service the same year that the first personal computer was introduced to the public. Think of all the innovation and technological advancement that has occurred since then,” said Derwinski. “While it’s good to recognize what the F40PH has contributed to Metra’s reliability over the years, it’s also time to recognize that Metra is now providing this service with the equivalent of a classic car.”

Below: This 2012 photo of Metra F40PHM-2 185 “Village of Roselle” at Lisle, Ill., shows the unique rebuilt cab that earned this class the nickname “Winnebago.”