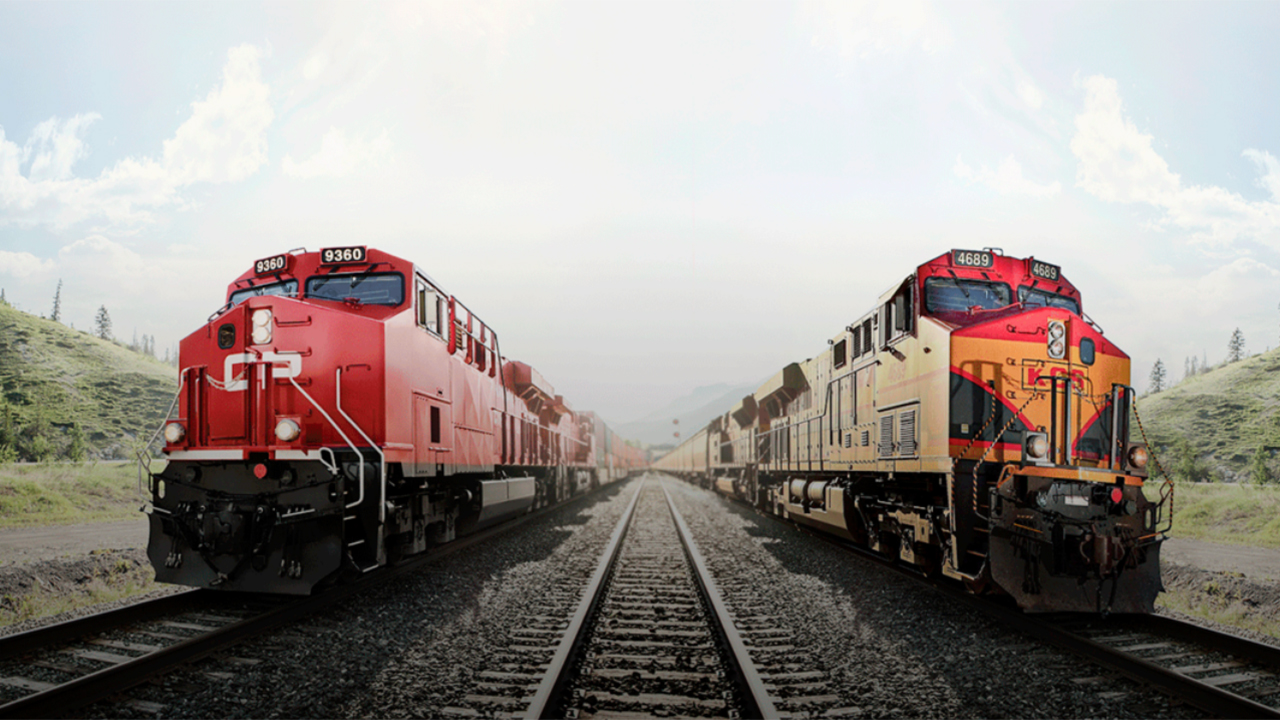 The story is a familiar one to readers of Railway Age, as we have followed it closely, in detail, publishing numerous news items and feature stories, editorials and podcasts involving all the key players, as KCS, exercising its fiduciary duty to its shareholders, pivoted away from CP toward CN’s larger pie, then back to CP almost immediately after the STB turned a fire extinguisher on the CN deal as it was baking in the oven, snuffing out a crucial ingredient, CN’s voting trust application.

CP, patiently—though not quietly—waiting on a siding with a somewhat larger pie than it originally offered, an approved voting trust and the STB’s decision to consider a CP-KCS combination under simpler, pre-2001 merger rules—has now moved out of that siding under a limited clear, as a few more pieces must fall into place before STB traffic control gives a high green. While there are no guarantees, the track forward looks relatively straight. Clear track ahead? Almost.

Most of what follows here is drawn from the press releases issued by CP and KCS on Sept. 12. The language, undoubtedly vetted by attorneys and financial advisors, is, in my opinion, just a formality—statements that have to be made. I’ve edited it to simplify some of the “twisties”:

In other words, CN has five days to decide to offer an even bigger pie and proceed with a merger, sans a voting trust. This, of course, is a possibility, but at this point it looks highly unlikely—especially when one of CN’s new “beneficial owners,” activist hedge fund TCI Fund Management Limited, has threatened to take CN headquarters in Montreal, turn it upside down and shake it violently, as hedge funds tend to do. TCI’s aggressive, chest-puffing, “stop screwing around with my money” tactics do have a role here, but in my opinion, they’re not nearly as important as TCI wants you to believe. The reality is that a CP-KCS combination is much easier for the STB to digest, from regulatory and political-climate standpoints, than a CN-KCS deal. And while CN’s pie is definitely not half-baked, CP’s ingredients look easier to mix.

Getting back to basics (dollars and cents), under the terms of CP’s proposal, following the closing into a voting trust, each share of KCS common stock would be exchanged for 2.884 CP common shares and $90 in cash. In addition, holders of KCS preferred stock would receive $37.50 in cash for each share of KCS preferred stock held. CP’s merger proposal values KCS at $300 per share, representing a 34% premium, based on the KCS unaffected closing share price of $224.16 as of March 19, 2021 and CP’s closing share price of C $91.50 (at 1.2565 FX rate) as of Aug. 9, 2021.The proposed transaction includes the assumption of $3.8 billion of outstanding KCS debt.

The proposal is binding on CP and may be accepted by KCS at any time prior to 5:00 pm EDT on Monday, Sept. 20, 2021. The transaction would be subject to approval by the stockholders of CP and KCS, receipt of regulatory approvals and other customary closing conditions. KCS has scheduled a shareholer’s special meeting for Sept. 24.

CP President and CEO Keith Creel, Railway Age’s current Railroader of the Year, is understandably pleased. “CP stands ready to execute a definitive merger agreement to create the first U.S.-Mexico-Canada railway to enhance competition in the North American rail network,” he said. “We are pleased to reach this important milestone and again pursue this once-in-a-lifetime partnership. As we have said throughout this process, CP remains committed to everything this opportunity presents. This merger proposal provides KCS stockholders greater regulatory and value certainty. We are excited to move forward as we work toward making this perfect match a reality.”

By now, most of you must be familiar with—or maybe know by heart—the reasons why CP feels a merger with KCS is “the only viable Class I combination.” In case you’re not, here they are:

“A CP-KCS combination would create more competition—not less—in the freight rail industry and would be better for Amtrak. It brings more competition among railways and protects obligations to passenger service.

“CP-KCS would enhance competition, create new and stronger competitive single-line options against existing single-line routes while taking trucks off the highway. CP-KCS would maintain all existing freight rail gateways and maintain competition in the Baton Rouge to New Orleans corridor, while creating new north-south lanes between Western Canada, the Upper Midwest and the Gulf Coast and Mexico.

Up until now, I haven’t done much editorializing during the events of the past few months, leaving it mostly to others—such as Contributing Editors Frank Wilner, Jason Seidl, Jim Blaze and Roy Blanchard—to offer their analysis and opinions. I’d like to offer, for what their worth, a few personal observations.

Three Class I CEOs have been central to these events: JJ Ruest (CN), Pat Ottensmeyer (KCS) and Keith Creel (CP). They are, respectively, our 2019, 2020 and 2021 Railroaders of the Year. All three are among the best at what they do, passionate, and dedicated to their people and their companies. Conspiracy theorists may concoct some wild idea that there’s a pattern here, but if they do, they’ve been ingesting hallucinogenic mushrooms.

TCI has pulled no punches painting JJ Ruest as a poor leader who has pursued a foolish quest for a merger and has exposed CN to financial ruin. That’s nonsense, patently unfair, even cruel. JJ saw a fastball coming across the plate, and he swung at it. Regardless of whether he hits a home run or strikes out, he should feel very good about the job he’s done at CN. While 36% share price growth since January 2018 may not be good enough for TCI because it’s the “worst” among the Class I’s, in my book it’s pretty impressive. If I were a CN shareholder, I’d be quite satisfied. JJ, you may have to listen to these people and tolerate their snarky rhetoric, but know in your heart that what they have to say about you is irrelevant, in terms of your character, accomplishments and experience. As we say in Jersey, screw ’em! And as I’ve said many times before, a railroad is much more than the almighty “shareholder value,” a sickeningly overused term. As for activist investors and other disruptive forces, they do have their place in an industry that has been prone to complacency, but they are by no means the last word. Customers are the last word, period.

Keith Creel, you are to be admired for your tenacity—doubtless developed by serving your country as a proud member of the military, as well as by working many years for a now-legendary railroader, Hunter Harrison—but also for your humility and quiet strength.

Pat Ottensmeyer has undoubtedly been in the toughest position while this story has unfolded. One would need to have a great deal of inner calm while being pulled in opposite and competing directions. I think Pat has taken a very measured, thoughtful approach throughout this entire process. Perhaps things will be a little easier, less hectic, going forward.

This story isn’t over, and it won’t be for a while. Regardless of the outcome, there are three good railroads to run. The people at CP, KCS and CN will keep at it, as we will endeavor to keep you, or readers, as up-to-date as we possibly can.

By the way, let’s not forget some of the people who have been behind the scenes players: BofA Securities and Morgan Stanley & Co. LLC, serving as financial advisors, and Wachtell, Lipton, Rosen & Katz, Baker & Miller PLLC, Davies Ward Phillips & Vineberg LLP, WilmerHale, and White & Case, S.C., serving as legal counsel, respectively to Kansas City Southern. One wonders what these folks are amassing in billable hours, commissions and consulting fees. Care to share what you people are raking in? Just sayin’.