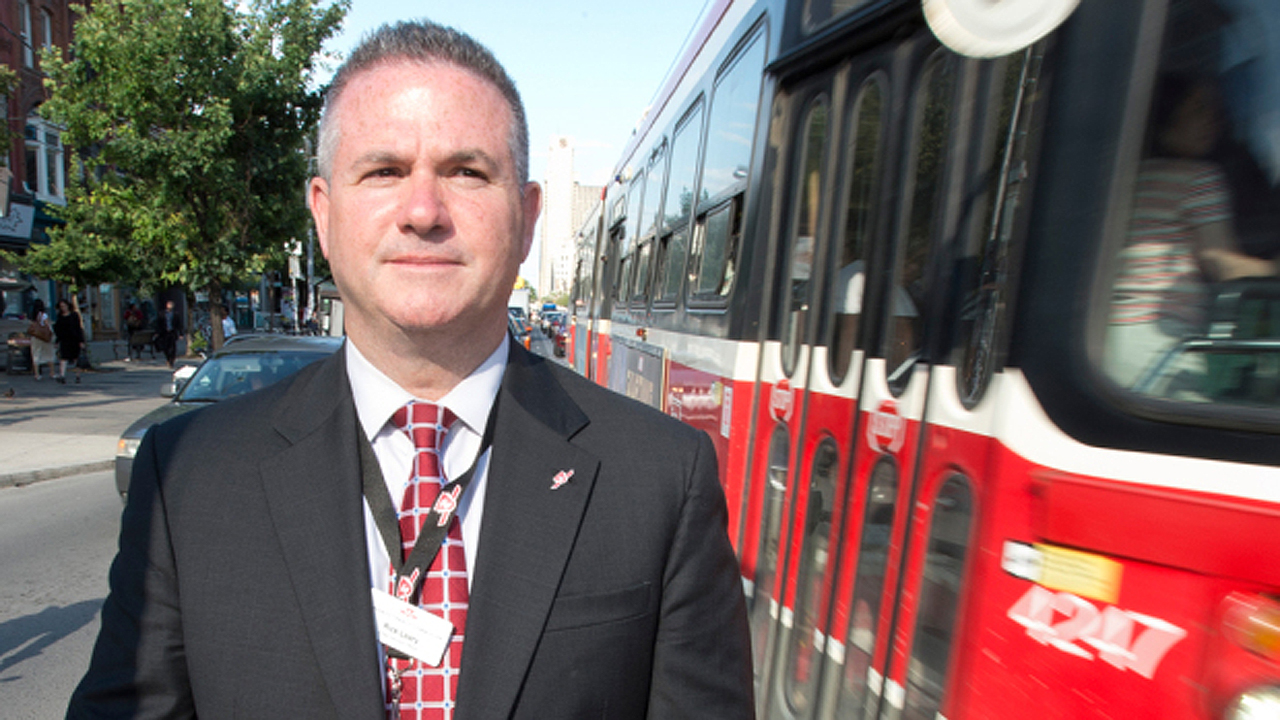 Rick Leary, recently confirmed as CEO of the Toronto Transit Commission (TTC), is an American who made the move to Canada from Boston’s Massachusetts Bay Transportation Authority (MBTA, or “T”), initially with a 4-1/2 year stint running York Region Transit (YRT), on Toronto’s northern border.

A Boston native, Leary is the second person from Massachusetts to head the TTC. David Gunn was Chief General Manager during the late 1990s. In a Railway Age interview, Leary said that leaving his country of birth was not as difficult a choice as it might be for some people.

“I’ve always been a big fan of Canada, and after I took retirement from the T, I interviewed for transit positions in California and Texas. However, when I heard about the management opening at York Region Transit, I was happy to apply for it, and succeeded.” YRT operates an all-bus system, including Bus Rapid Transit (BRT); several of its routes feed the TTC subway system.

The T experience proved invaluable for Leary, as that system has both light rail (LRT) and heavy-rail (subway) operations, as well as buses (diesel buses and electric trolley buses, or “trackless trolleys”), diesel commuter trains, and contracted ferry boats. The TTC mix is simpler; the authority turned over its ferry boats to Toronto in 1962, while the last trolley bus wires came down in 1993. Diesel commuter trains are the responsibility of GO Transit, operated by regional agency Metrolinx.

Leary joined the TTC at an interesting, if challenging, point in the Commission’s almost century-old history (operations commenced September 1, 1921). One of the greatest challenges is securing sufficient governmental funding for optimum service, despite one of the highest farebox recovery ratios in North America.

The recently opened Spadina Subway extension will require a significant operating subsidy for some time, as it operates through a lower-density environment. The four-mile Sheppard Subway also suffers from patronage issues.

The next subway construction project, in Leary’s opinion, should be the Relief Line. This operation, as its name implies, is needed to take pressure off the seriously overcrowded Yonge Subway (Line One).

The alignment would be “L” shaped, starting, likely, at University Avenue and Queen Streets, proceeding eastward and then north to Pape Station on the Bloor Danforth (Line Two) Subway, about five miles. It might be extended northward to Eglinton Avenue, connecting with the Crosstown LRT, and perhaps Sheppard Avenue. Funding for preliminary design and engineering work has been approved. The Relief Line would likely be completely in-tunnel.

Another project that Leary favors is extension of the Yonge Subway northward from Finch Terminal to the town of Richmond Hill, about six miles (all tunnel). He points out that although this municipality is presently served by GO trains, there are many potential subway riders to intermediate destinations, such as office complexes in North York, Yonge-Eglinton and Bloor-Yonge that the GO line misses.

“We’ve been reviewing Line One capacity requirements,” Leary explains. Improvements to the Yonge University-Spadina Subway are also in the pipeline. These include Communications-Based Train Control (CBTC) over the entire line by 2019, reducing headways. Construction of a second platform at the Line 2 interchange station at Bloor-Yonge is also planned.

One headache that Leary inherited was the lengthy delay in the delivery of the 204-unit Flexity Outlook LRV order from Bombardier. This problem has been compounded recently by construction quality issues, including welds; almost 70 cars will be returned to the builder for correction.

The late arrival of the new cars forced the TTC to overhaul some its current streetcar fleet, the Canadian Light Rail Vehicles (CLRVs) and Articulated Light Rail Vehicles (ALRVs), to carry on while their replacements were delayed. In late October 2018, just over half of the Flexity order had arrived in Toronto.

Leary explains that the Commission is negotiating with Bombardier on this issue, which focuses on the option for 60 more Flexities, needed for ridership growth. Production has been stepped up, with a second line set up at Bombardier’s Kingston plant, supplementing its Thunder Bay operation. Transit industry veteran Lee Sander, an American like Leary, has been installed as President of Bombardier Transportation-Americas Region, tasked with fixing the company’s numerous problems, which have cost it a significant amount of Canadian and U.S, business and compromised its reputation.

Leary tends to look on the positive side. “In service, although there have been door issues, the Flexities have been a pretty reliable car, travelling about 10,000 miles between defects,” Leary observes. “The Toronto Rocket Subway cars, also from Bombardier, have generally worked quite well in service.”

A TTC staff report on the approved Scarborough Subway Extension (of Line Two, from the present Kennedy Terminal) will soon be presented to Toronto City Council, with detailed cost estimates. The subway is planned to replace the existing Scarborough Rapid Transit (RT) line, an above-ground automated operation that uses cars similar to those on the Detroit People Mover and Vancouver’s Skytrain.

The RT, opened in the mid-1980s, is nearing the end of its life cycle. The city has opted for a seamless ride to McCowan Road terminal, eliminating the present transfer at Kennedy Station. The subway, some four miles in length, will be entirely underground and extremely costly.

The next rapid transit undertaking for the TTC will be the Eglinton Crosstown LRT, scheduled for 2021 completion. “It’ll be a stand-alone operation,” says Leary. “We’ll operate it, but Metrolinx will be the owner.”

The Crosstown will not have a track connection to the TTC legacy system. It is being built to railway standard gauge, rather than the TTC’s 4 feet, 10-7/8 gauge. In any event, the Crosstown’s LRVs likely could not negotiate Toronto’s legacy streetcar system.

Leary has not undertaken any major departmental restructuring at the TTC. “We are planning to fill some specialty jobs, such as Chief of Engineering and Structures, and Chief of Vehicle Engineering.”

On the personal front, Leary and his wife will soon be house hunting in Toronto, to end his lengthy commute from the outlying town of Aurora. “We even have a little Canadian in our home; our five-year-old daughter was born after our move to Canada.”

Down the track, Leary and his staff expect to begin drafting plans to celebrate the TTC’s 2021 centennial. “It will be an honor to be on board for such a significant event,” he says.