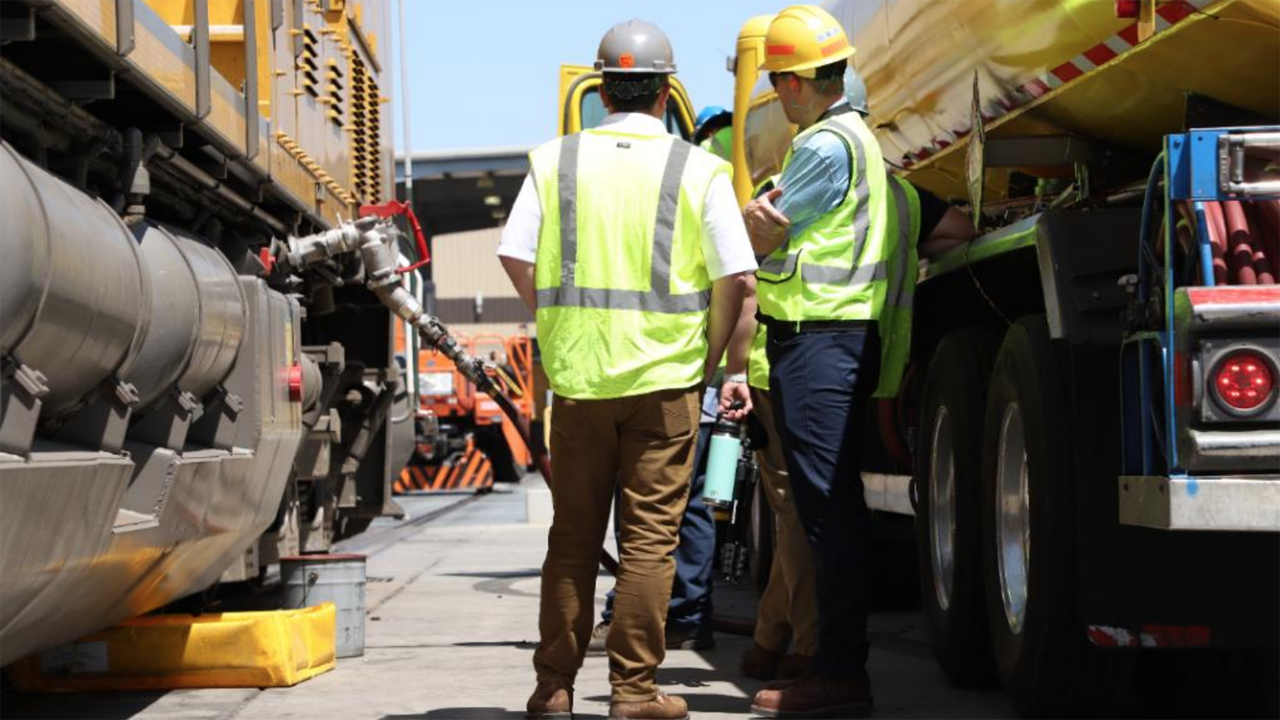 (Photograph Courtesy of UP)

Four Union Pacific (UP) locomotives in California are now running on 100% biomass-based fuel, the Class I railroad reported July 14.

UP said it is the first time its locomotives have been powered solely by a renewable fuel source made from vegetable and/or animal fats.

This field test—part of the railroad’s ESG initiative called “Building a Sustainable Future 2030”—is slated to determine the feasibility of using an 80% renewable diesel and 20% biodiesel blend.

“Both the biodiesel and renewable diesel are produced from vegetable oils, animal fats or greases, but are manufactured differently, with renewable diesel more closely resembling a petroleum-produced diesel product,” according to UP.

On March 8, UP reported that it would start using a higher biodiesel blend in locomotives acquired from Wabtec. In May, it launched the California field test with four Wabtec FDL engines operating out of the West Colton yard.

Now, filled with UltraClean BlenD™ from Ames, Iowa-based Chevron-Renewable Energy Group, the locomotives are being used in the transport of sand and gravel from a San Bernardino mine to West Colton.

“The project will help Union Pacific meet its science-based target to reduce greenhouse gas emissions [GHG] by 26% by 2030 and net-zero emissions by 2050,” the railroad continued. “Union Pacific is committed to reducing its carbon footprint and meeting its environmental goals. Increasing the use of renewable diesel and biodiesel fuels represents a promising avenue to make progress toward our target.”

All four locomotives were put through a series of baseline tests at Wabtec’s design and development hub in Erie, Pa., before they made the trip to California in April and May, according to UP. Now, every six months, each unit will be evaluated based on emissions data and wear-and-tear on the engine.

“We have not tested the limits on increasing biofuel blends on our locomotives and how it will impact performance and reliability of the engine,” said Grace Olsen, UP’s General Director-Locomotive Engineering and Quality, Mechanical. “This is an important step to make sure we maintain our locomotives and reduce our GHG emissions.”

“Union Pacific’s use of biodiesel and renewable diesel is a testament to their commitment to sustainability and provides a pathway to achieve their sustainability targets,” said Adam Sander, Director of Emerging Markets at Chevron-Renewable Energy Group. (In June, Chevron Corp. acquired Renewable Energy Group/REG.) “REG UltraClean BlenD™, our blend of biodiesel and renewable diesel, also enables Union Pacific to decarbonize today using existing assets and infrastructure with no significant capital investments required.”

In August 2021, UP reported that Progress Rail approved the use of up to 20% biodiesel blend in the vast majority of ElectroMotive Diesel (EMD®) locomotives operated by the railroad: EMD 710 and 645 series units. Previously, the locomotives were approved to use up to a 5% biodiesel blend.

“Progress Rail and Union Pacific are working together to test the higher biodiesel blend in the remaining EMD® fleet,” the railroad reported in its 2021 Climate Action Plan, released in December 2021. “This is only the initial step. EMD® locomotives represent only approximately 40% of our existing locomotive fleet. To reach our goals related to the consumption of low-carbon fuels, we must reach a critical mass of our locomotive fleet compatible with higher blends of low-carbon fuels. Also, additional infrastructure investments may be required to facilitate the storage and use of these higher-blend fuels.

In related developments, Wabtec on July 12 hosted an Alternative Fuel Conference in Chicago with more than 80 participants. In-person and online attendees included alternative fuel vendors REG and Linde, Wabtec employees from across the country, and representatives from Wabtec customers, such as Amtrak, Anacostia/Pacific Harbor Line, BNSF, CN, Canadian Pacific, Genesee & Wyoming, Iowa Interstate Railroad, Kansas City Southern, Norfolk Southern, Rio Tinto, and UP. Wabtec said it held the conference “to prompt a technical conversation with the railroad industry, alternative fuel suppliers, and propulsion technology providers to drive progress in decarbonization. The hope is that we can work together as a team to optimize the path forward toward a net-zero-emissions railroad industry.”