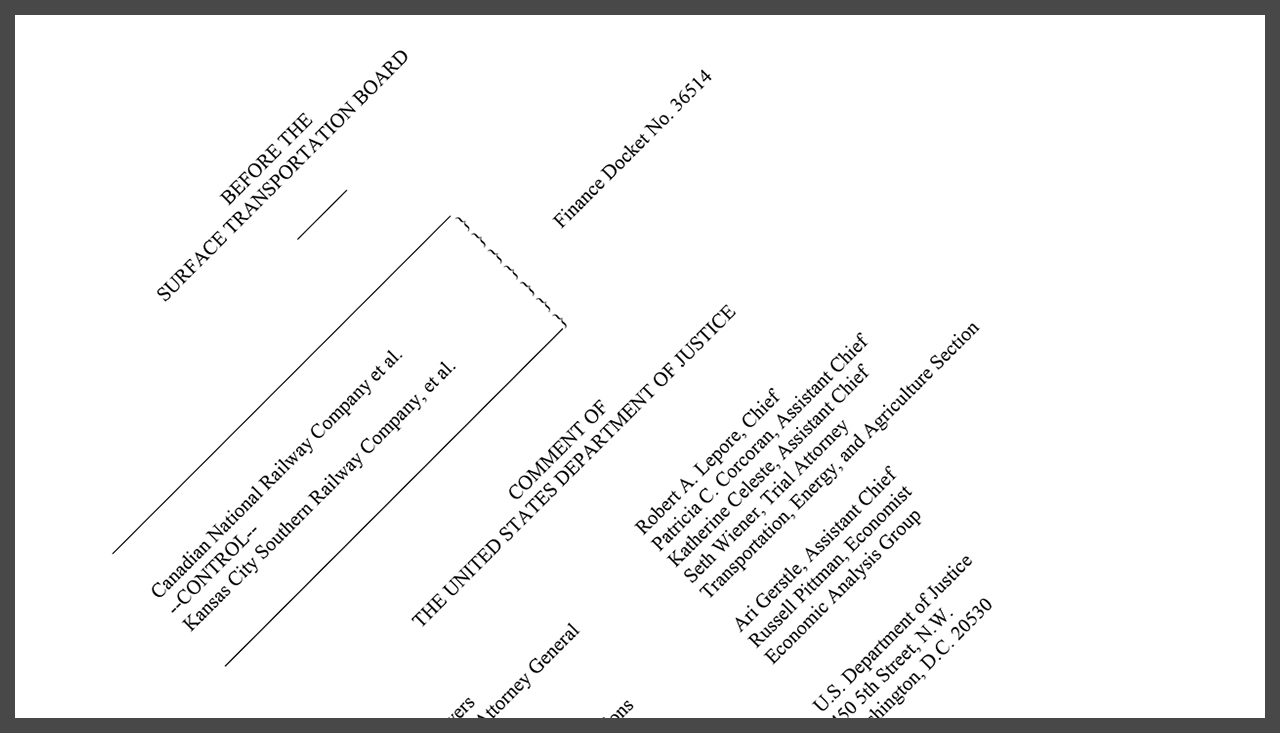 In a May 14 filing with the Surface Transportation Board, the United States Department of Justice has said CN’s application for a voting trust to acquire Kansas City Southern should be denied, because the proposed merger “raises sufficient competition concerns.”

Following are excerpts from DOJ’s letter, which can be downloaded below:

“The [DOJ’s] concerns regarding the use of a voting trust in the proposed CP transaction apply with greater force to CN’s proposed acquisition of KCS because it raises additional potential competitive concerns. As the [DOJ] explained in its prior submission, even two railroads that are ‘end to end’—i.e., that do not compete to offer parallel single-line service between the same origin and destination pairs—may still compete with one another in important ways.

“Given the larger number of competitive concerns presented by CN’s proposed acquisition, the [DOJ] respectfully submits that CN’s use of a voting trust would be even more problematic than the use of a voting trust by CP. Also allowing CN to utilize a voting trust would thus appear inconsistent with the [STB’s] view that trusts should ‘not be used routinely,’ and only be available on ‘rare occasions when their use would be beneficial.’ In order to preserve the Board’s ability to protect competition and to thoroughly review the issues presented by a CN acquisition, the Board should not permit CN to enter into a voting trust.”

Interestingly, the DOJ has serious concerns regarding the use of voting trusts for railroad mergers. In July 2016, the Department issued EAG (Economic Analysis Group) discussion paper, The Strange Career of Independent Voting Trusts in U.S. Rail Mergers. “Voting trust arrangements have a long history at both the Interstate Commerce Commission and the Surface Transportation Board as devices to protect the incentives of acquiring firms and maintain the independence of acquiring and target firms during the pendency of regulatory investigation of the merger proposal,” wrote author Russell Pittman, U.S. Department of Justice Director of Economic Research, Antitrust Division. “However, they are not without problems. The STB argued in 2001 that as Class I railroads have become fewer and larger, it may be difficult to find alternative purchasers for the target firm if the STB turns down the proposal. The Antitrust Division argued in 2016 that joint stock ownership creates anticompetitive and/or otherwise undesirable incentives, even if the independence of the voting trustee is complete. On the other hand, the functions served by voting trusts in railroad mergers are served by merger termination fees and other contractual ‘lockup’ mechanisms in other parts of the economy, without the same incentive problems as voting trusts. Thus voting trusts may no longer serve a useful function in railroad merger deliberations.”

Canadian Pacific, still considering its options (it has five business days to respond to the Kansas City Southern Board of Director’s May 13 notice that KCS intends to terminate the merger agreement with CP because CN’s counter-proposal is a “Company Superior Offer”), commented on DOJ’s objection to a CN voting trust:

“CP concurs with the DOJ’s objection to CN’s application for proposed use of a voting trust on the grounds that a CN merger with KCS would pose greater risks to competition than the CP-KCS agreement. The filing notes: ‘A CN-KCS transaction poses additional dangers to competition stemming from the potential elimination of direct, ‘parallel’ competition on routes served by both railroads, for example between Baton Rouge and New Orleans.’ CN’s proposed use of a voting trust would create ‘threats to competition [that] would be present immediately after the CN voting trust is consummated.’ And, DOJ added, ‘[I]t is particularly important to protect’ the incentives of CN and KCS ‘to compete where, as here, CN and KCS appear to compete head-to-head on multiple parallel routes.’

“The filing continues: ‘On May 6, 2021, the Board approved the proposed CP-KCS voting trust in Finance Docket No. 36500. Notwithstanding this decision, the Board should not permit the proposed CN voting trust because CN’s proposed acquisition of KCS appears to pose greater risks to competition than the risks posed by a CP-KCS merger.’

“The DOJ’s position is consistent with CP’s assessment that CN’s proposal is illusory and offers unattainable value to KCS shareholders.

“CP remains confident its friendly agreement is the only viable merger for KCS, as already validated by two favorable rulings by the STB. The STB approved CP’s use of a voting trust and affirmed KCS’ waiver from the new rail merger rules it adopted in 2001 because a CP-KCS combination is truly end-to-end and pro-competitive, and together they would remain the smallest Class I railway.”

CP reported on March 17 that “more than 130 additional stakeholders have filed statements with the STB supporting CP’s planned, friendly merger with KCS, bringing the total submitted to date to more than 680. There are also more than 110 letters filed with the STB expressing concern about the CN proposal.”