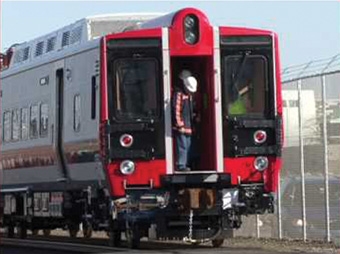 Metro-North Railroad and Long Island Rail Road won approval from a committee of the Metropolitan Transportation Authority (MTA) Board of Directors on Monday, Nov. 17, 2014 to award contracts totaling $34.6 million for the purchase of inward- and outward-facing cameras in the cabs of their rail fleets.

A total of 2,064 rail cars and locomotives will be outfitted under the base, 36-month contract, which the full MTA Board will consider for approval on Wednesday, Nov. 19.

The outward-facing cameras will be used to record track and wayside activities. The inward-facing cameras will be used to record the engineer’s control area while the train is in operation. In addition, both LIRR and Metro-North will install cameras in stations and on platforms to improve passenger and crew safety by acting as a deterrent to crime and providing “forensic investigative capability.”

The National Transportation Safety Board recommended installing camera systems last February, as part of its ongoing criticism of Metro-North safety lapses that led to several high-profile incidents in 2013, including a seven-car Metro-North derailment along the Hudson River on Dec. 1, 2013 that killed four people and injured 63.

“Cameras provide another measure of safety and security intended to ensure our trains operate as well as possible and reassure our customers,” MTA Chairman and CEO Thomas F. Prendergast said. “They will aid investigations after accidents and other incidents, as well as deter behaviors that could affect safe train operations.”

Because of the complexity of implementing such a system, Metro-North, on behalf of the LIRR, last March requested and received board approval to use the Request for Proposal process to procure the cameras. An MTA selection committee has recommended awarding a $16.7 million conract to 4D Security Solutions for LIRR work, and a $16.7 million contract to Sepsa North America for Metro-North installations.