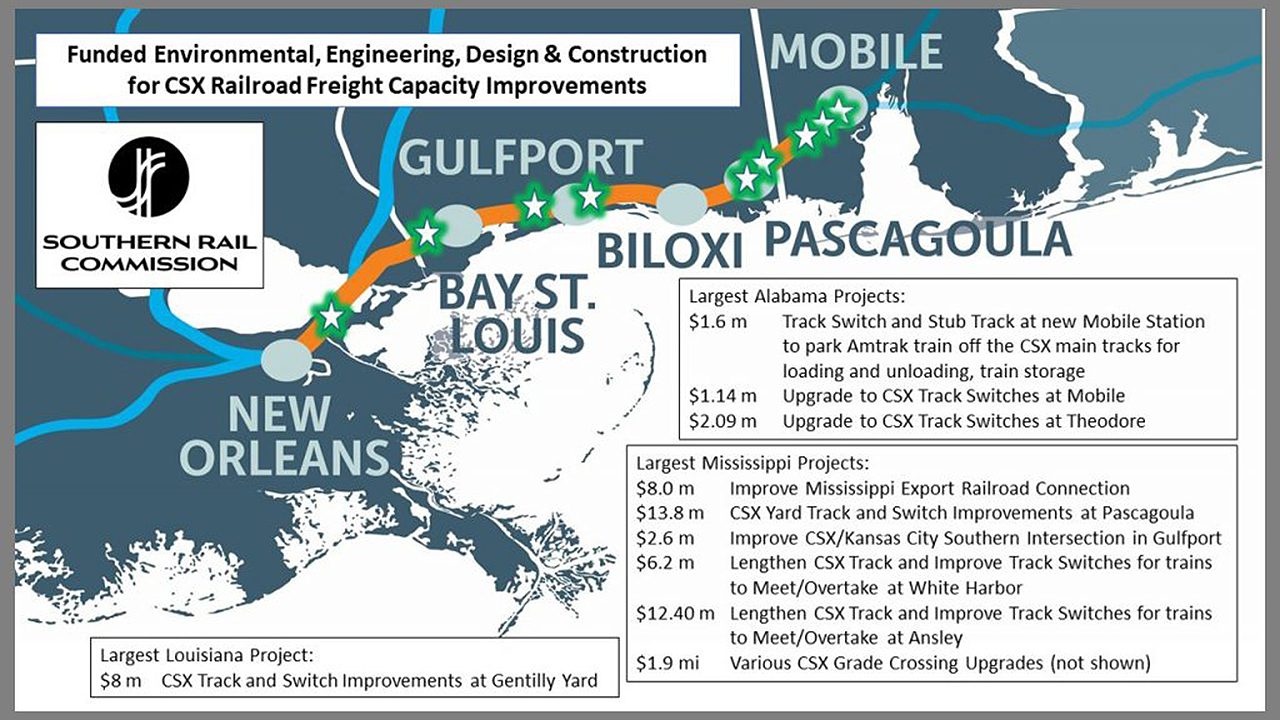 CSX, Norfolk Southern (NS), and the Alabama State Port Authority and its Terminal Railway Alabama State Docks division (collectively, the Port) are again requesting Surface Transportation Board (STB)-sponsored mediation as they “continue to believe that an amicable resolution is possible—one that facilitates a prompt and orderly commencement of Gulf Coast passenger service while protecting the customers and shipping partners that rely on quality freight rail service.”

Amtrak in March 2021 submitted an application under 49 U.S.C. § 24308(e), seeking an STB order requiring host freight railroads CSX and NS to allow intercity passenger trains to operate over their lines from New Orleans, La., to Mobile, Ala. This resulted in months of clashes via STB filings between Amtrak and the freight railroads (as well as years of clashes before STB involvement). STB instituted a proceeding on the proposed service in August 2021.

Following an STB public hearing, held Feb. 15-16, 2022, and roughly a week before a scheduled evidentiary hearing (starting April 4), the Class I’s and the Port asked STB to order mediation. Amtrak opposed it, writing in an STB filing that while “an amicable resolution of this matter may be possible,” the move to mediation is “yet another attempt to further delay a process that has already been delayed far too long.”

STB on April 1 denied the railroad-port motion for mediation. The agency explained that it “favors the resolution of disputes through mediation in lieu of formal Board proceedings whenever possible,” noting that it “may order the parties to a proceeding to engage in Board-sponsored mediation at the written request of one or more parties, or by its own order. … However, the Board may deny mediation where one or more parties to the underlying dispute do not consent to mediation. …

“Here, it is unfortunate that the petitioning parties formally petitioned for mediation only after this matter had been pending for more than a year and on the eve of the evidentiary hearing. It is equally unfortunate that Amtrak has now, and in the past, rejected the idea of Board-sponsored mediation. Had all parties been willing to enter into mediation, the Board might have been inclined to more favorably consider the request, even at this late date, since this matter appears to be one that could have been resolved through mediation, had the railroads, Amtrak, and the Port been willing to moderate their positions. However, because the evidentiary hearing is scheduled to begin in a few days, on April 4, and because not all parties favor mediation at this time, the Board will deny the motion to avoid further delay. At the conclusion of the evidentiary hearing, if it appears that Board-sponsored mediation could be helpful in resolving any remaining issues in this matter, any party may request Board-ordered mediation at that time.”

In their most-recent STB filing, dated May 19 (download below), CSX, NS and the Port wrote that they “respectfully again move the Surface Transportation Board … to order the parties to participate in Board-sponsored mediation and to stay this proceeding until the completion of that mediation process. …

“The Board has now held 11 days of a public evidentiary hearing, which ended on May 12, 2022. During that exhaustive process, each party’s evidence was fully aired and subjected to cross-examination and questioning from Board members. And prior to this evidentiary hearing, the Board also held a two-day public hearing on February 15 and 16, 2022, to allow stakeholders and other interested parties to express their views on the National Railroad Passenger Corporation’s (Amtrak) Application for Gulf Coast passenger service. [Sixty-two persons made statements, followed by the railroads, the Port and Amtrak, with the “battle line … drawn roughly 50/50 between those who want to see passenger trains between the Crescent City and Mobile and those who don’t,” according to Railway Age Contributing Editor David Peter Alan’s Feb. 17 report.] Speakers on both sides of the case observed that freight railroads and Amtrak historically have negotiated agreements for the commencement of new or enhanced passenger service. Indeed, on May 12, 2022, Chairman Oberman and other members urged the parties to work collaboratively to settle this dispute. …

“Before any more rounds of evidence, reply evidence, direct testimony, cross examination, objections, post-hearing briefing, and closing legal arguments, an informed mediation effort must be given a chance to succeed. After a springtime of hearings, the Joint Parties are confident that, with the help of a Board-appointed mediator, and with technical support from Board staff on the RTC model [Railroad Traffic Control model that simulates real-time conditions on a rail line] the parties can negotiate a collective, comprehensive settlement. Such a Board-guided undertaking may succeed where previous efforts have not.”

CSX, NS and the Port urged the STB “to provide the parties 60 days to work with the mediator, recognizing that mediation could be extended with the consent of all the Parties.” Additionally, they wrote that the “case should be stayed while the matter is in mediation so the parties can focus their attention and efforts on settlement. If the mediation is unsuccessful, the evidentiary proceeding could resume with supplemental evidence as invited by the Board.”

The freight railroads and the Port also sought a technical conference with their respective experts and the STB staff that would allow them to “pose specific questions on a number of complex or contentious RTC modeling topics prior to any further hearing days.”

Amtrak on May 20 responded to the motion via STB filing (download below), stating that “because a stay of proceedings would prolong a process that has already taken far too long, and because Amtrak continues to believe that having the Board’s guidance on the legal standards is critical, Amtrak opposes the renewed mediation request.”

“America’s Railroad” also opposes it because “CSX and NS have made clear that they do not intend to share [specific RTC model] information with Amtrak as part of the mediation process.” That information, Amtrak wrote, would among other things “allow Amtrak to assess the validity of CSX’s and NS’s demands for [Gulf Coast] infrastructure to be paid for by taxpayer dollars.”

The next move is STB’s. Stay tuned.