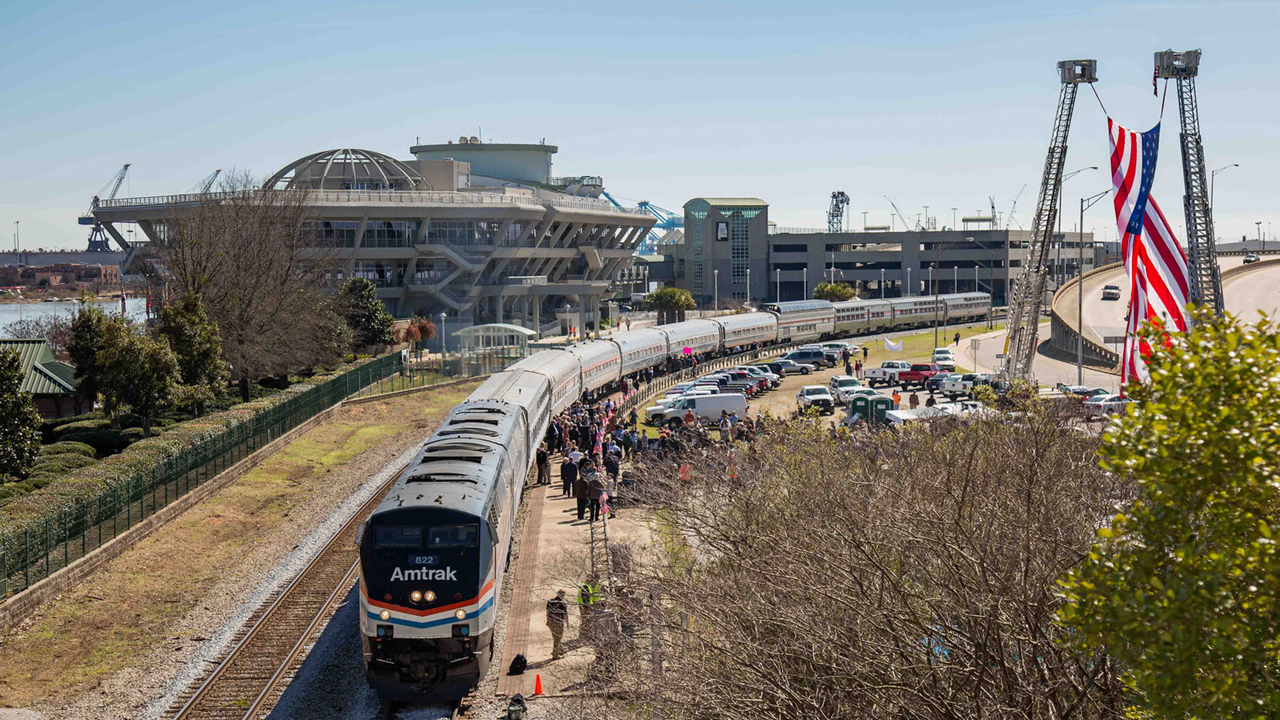 In a move that appears to be a pre-emptive strike, Amtrak has asked the Surface Transportation Board (STB) to intervene on its behalf if CSX and Norfolk Southern don’t cooperate on hosting proposed new service between New Orleans and Mobile.

“Under STB procedures, CSX and NS will be required to provide Amtrak access to their railroads for this service or prove to the public why they cannot successfully host these trains in accordance with the law,” Amtrak said in a statement released late on March 16. “Amtrak has a legal right to use this route, which has sufficient capacity to host these trains, and up to $66 million in targeted improvements to support the new intercity passenger rail service along the line awaits action. These potential investments have been reviewed, approved and funded by the Federal Railroad Administration (FRA), Amtrak and others.”

As such, the proceeding may serve as a test case for how the STB handles future intercity passenger rail proposals involving Amtrak, state entities and host freight railroads, when reaching agreement proves problematic, according to industry observers.

Interestingly, the FRA Gulf Coast Working Group (GCWG) Report includes CSX stating in July 2017 that this matter appears destined for the STB (p. ES-4): “It is CSX’s position that if Amtrak wishes to add modified passenger rail service along the Gulf Coast, the appropriate next step is for it to initiate the planning process with a formal notice to CSX so that the two parties, and ultimately the Surface Transportation Board, can establish a path forward.” (Emphasis Railway Age.)

A May 25, 2017 letter from the Southern Rail Commission, a federally created entity representing Alabama, Louisiana and Mississippi, to the FRA points to CSX’s objections. An excerpt from p. 1: “From the beginning and throughout this process, SRC has maintained that the restoration and enhancement of service along the Gulf Coast should work for both freight and passenger rail interests. However, CSX has failed to reciprocate this sentiment and their actions demonstrate what can only be understood as an unwillingness to negotiate in good faith and an opposition to bringing back passenger rail service to communities along the Gulf Coast.”

Amtrak reported March 16, 2021 that in an STB filing, it asks for “expedited consideration” and an order requiring host freight railroads CSX and Norfolk Southern to permit Amtrak access for twice daily round-trips starting on or about Jan. 1, 2022. Amtrak would operate the trains for the SRC.

While Amtrak confirmed late last month its intention to begin the service in 2022, no agreement had been reached by Amtrak and CSX—which owns most of the tracks upon which the new service would operate (see map below)—and NS, Railway Age reported Feb. 26.

Their one-year agreement expired in January. “Something that should have taken seven months was far from completion after a year,” Amtrak spokesman Marc Magliari told Railway Age in February. “In fact, discussions have been under way for five years. There was no sign of any conclusion in sight.”

He added that Amtrak had notified CSX and NS of its intention to start service, and asked them “where they believe there are more issues. We safely and successfully operate together elsewhere in the U.S., with dependable freight service coexisting with reliable and relevant Amtrak service. That’s what the Gulf Coast deserves, too.”

Railway Age reached out to NS and CSX on March 16 regarding Amtrak’s STB filing.

In a statement, NS said: “As Amtrak has filed with the STB, we are now in litigation on the matter and therefore will not be issuing any further comment.” The railroad also provided its previously issued statement on the proposed Gulf Coast service, which Railway Age published Feb. 26: “There is an established process for introducing new passenger rail service on freight rail lines recognized by both the freight and passenger railroad industries. It involves identifying, through a data-driven study, what infrastructure is necessary to ensure that the new passenger service is transparent to freight operations and doesn’t negatively impact the freight rail customers. The public entities sponsoring the service finance the infrastructure construction prior passenger service being introduced. It is a well-instituted process, one that history has shown to work. Norfolk Southern welcomes the prospect that this process will be revived and completed in the proposed Mobile-New Orleans service.”

CSX provided this statement: “Amtrak elected to abandon the long-standing practice of completing an impact study when the introduction of new passenger service is proposed. Now that this matter is before the Surface Transportation Board, CSX has no further comment.”

CSX released this statement to Railway Age last month: “From the onset, CSX prioritized this Amtrak Gulf Coast study, treating each step as expeditiously as possible. Any CSX-requested modifications to study parameters were to ensure the model was compliant with federal law. CSX and its customers strongly support the completion of this study. Not only are we committed to seeing its completion, but the STB has a statutory obligation to determine if a new passenger service unreasonably interferes with freight operations. It is critical that this study and the full infrastructure impact assessment is completed.”

Before Hurricane Katrina in 2005, Amtrak said it served the Gulf Coast region via three different services: “two of which successfully ran daily between the same city pairs as the proposed Gulf Coast service, along with the tri-weekly Sunset Limited (Trains 1 & 2). The Sunset Limited was suspended between New Orleans and Florida when Katrina washed away much of the CSX railroad in 2005.”

The Federal Railroad Administration (FRA), Amtrak, CSX, NS, SRC and others began work on returning service to the Gulf Coast in 2015, according to Amtrak.

In July 2017, a Gulf Coast service restoration study, administered by FRA’s Gulf Coast Working Group, “showed where freight railroad improvements are needed,” Amtrak’s Magliari said last month. “Since 2019, the Southern Rail Commission has had $33 million in federal grants to pay for them.”

In its March 16 announcement of the STB filing, Amtrak explained the proposed Gulf Coast service this way: “Usage of the route by CSX and NS is far from its capacity. Under the planned schedule, each morning and each afternoon, an Amtrak train would depart from both Mobile and New Orleans, passing each other in Mississippi, where almost $45 million in improvements are proposed and funded. Amtrak operations at Mobile would be scheduled with approximately 12 hours between the two departures and 10 hours between the two arrivals.

“We want to deliver this service next year, not some day far away, and the STB is the proper forum for resolution.” — Amtrak’s Dennis Newman

“In Mobile, these trains would serve a downtown station and park off the CSX main line at a dedicated storage track more than one mile west of the Alabama State Docks main and interchange tracks. This station site is within walking distance of businesses—including restaurants, hotels and other attractions—directly between the cruise ship terminal and the city’s convention center, making it ideal for visitors.

“Mobile is also considering a suburban stop that could provide air-rail mobility as commercial aviation is developed at Brookley Field, just as Amtrak does daily between downtown Milwaukee [Wis.] and its airport.”

“Amtrak has a right to use these railroads’ tracks but, unfortunately, we have been unable to reach agreement after years of effort just to operate two short and quick round trip Amtrak trains,” Dennis Newman, Amtrak Executive Vice President for Planning and Asset Development, said in a March 16 statement.

“It is time for the STB to step in to protect Amtrak’s rights to use freight railroad tracks to support service across America. The SRC and other state or regional groups look to partner with Amtrak to deliver safe, reliable and relevant service, and while we often reach agreements and co-invest with freight railroads without the STB’s involvement, we need the STB to bring this protracted process to a close.

“Elsewhere in the U.S., both CSX and NS successfully serve Amtrak and freight customers, coexisting and even thriving where there are more freight trains and less infrastructure than what is available on the Gulf Coast today.

“We want to deliver this service next year, not some day far away, and the STB is the proper forum for resolution.”

Southern Rail Commission released this statement from Mississippi SRC Commissioner Knox Ross: “We lost passenger rail service along the Gulf Coast 15 years ago when Hurricane Katrina damaged the rails and while those tracks have been repaired, passenger rail did not restart. Congress directed the FRA to lead an analysis to determine everything it would take to return service, and the SRC worked with the FRA to deliver that report in 2017 which identified $66 million in infrastructure needs. We have that funding now secured and we are ready to move forward. Our local communities are frustrated by all the years of studying and waiting, and we are hoping this public and transparent process will resolve all outstanding issues so that service can begin soon.” (SRC provides the full statement on its website.)

U.S. Senator Roger Wicker (R-Miss.), Ranking Member of the Senate Committee on Commerce, Science, and Transportation, issued this statement: “I appreciate Amtrak’s commitment to complete a years-long effort to restore passenger rail service to the Gulf Coast. I thank Amtrak CEO Bill Flynn for recognizing the importance of this effort and his dedication to seeing this route restored. For Mississippi, restoring passenger rail service is a symbol of the huge strides our state has made to recover from one of the most devastating storms on record. Reconnecting the Gulf Coast to our nation’s passenger rail network will increase access to jobs, boost tourism, provide a safe alternative to highway travel, and improve quality of life across the region. Our goal is to have successful freight and passenger rail service on the Gulf Coast, and I look forward to the Surface Transportation Board considering this matter.” (The full statement appears on the Senator’s website.)

The Rail Passengers Association said in a statement that “it fully supports today’s decision by Amtrak to ask the Surface Transportation Board (STB) to speed the restoration of passenger service to the Gulf Coast. It is the next logical step in a process that has been slowed at every opportunity by CSX Transportation, Norfolk Southern and others; this obstructionism will deny Alabama’s residents some $6 million in economic benefits from building and launching the new service, and anywhere from $12 million to as much as $220 million in benefits every single year to Alabama’s economy. We trust the STB will inject much needed transparency in the effort to restore a vital transportation link for the 2 million residents of the Gulf Coast in Louisiana, Mississippi and Alabama—severed since Hurricane Katrina devastated the region in 2005.” (Read the complete statement on the association’s website.)

“Although Congress gave Amtrak the right to operate passenger trains over all freight right-of-way, many freight railroads have simply said ‘no’ to proposed passenger service. Amtrak’s only hope for resolution lays at the STB.” (Read more on the organization’s website.)

Editor’s Note: Observers ask: Has Amtrak caught Norfolk Southern and CSX off guard? Was that its intent? What motivated the STB petition? Will the dispute escalate into all-out war, passenger vs. freight? Will Amtrak’s strategy backfire? Is this a good long-term move? Isn’t this supposed to be one industry, railroading? Or is this just both sides cooperating on playing politics, with the real negotiating work taking place behind the scenes? If you look closely at the 2017 FRA GCWG report, this could be inferred.– William C. Vantuono