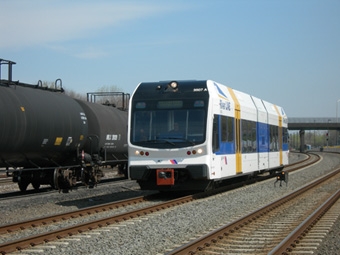 The Federal Transit Administration has declined to sanction an environmental study of a proposed $1.6 billion rail transit line linking Glassboro and Camden, both in New Jersey's Philadelphia suburbs, the latest setback to a service in flux for at least 18 years.

FTA made its decision last July, and informed the Delaware River Port Authority (DRPA), a bistate agency serving New Jersey and Pennsylvania, in a letter DRPA made public Oct. 7, 2014, following a request from the Philadelphia Inquirer, which broke the story.

“Unfortunately, because you have not identified a project sponsor who can accept the responsibility for commitments in the environmental impact statement, and ultimately operate and construct the project, we cannot move ahead with the environmental document,” said Brigid Hynes-Cherin, FTA regional administrator in Philadelphia, in the letter.

DRPA is overseeing an $8.1 million environmental study, but DRPA officials have said several times in past years the agency won’t build or run the rail line, bowing to pressure from Pennsylvania, which would not benefit directly from DRPA’s operation of such a line. New Jersey Transit has agreed to pay for the study, but has not agreed to build or operate the line, though adding the line would bolster NJT’s rail presence in southern New Jersey.

New Jersey State Senate President Stephen Sweeney, who supports the line and is a powerful political figure in the Garden State, says proponents will continue to suppor the project. “”It’s going to get done,” Sweeney said. “We’re working to have NJ Transit take the lead.”

The proposed rail line, much of it owned by Conrail Shared Assets, would share track with Conrail freight moves and likely would be served by diesel multiple-unit (DMU) trains compatible with Federal Railroad Administration (FRA) rules involving mixed rail traffic.

Some New Jersey advocates have sought diesel light railway transit (DLRT) operations similar to—or even as an extension of – NJT’s existing RiverLINE service (shown in photo above) between Camden and Trenton, the state capital, which began operating in 2004. Others have argued for an extension of PATCO rapid transit service, operated by DRPA, offering a “one-seat ride” to Center City Philadelphia, using either third-rail propulsion used by PATCO or dual-mode cars of some unspecified design.

Regardless of rail submode chosen, the proposed line would connect with both PATCO and RiverLINE trains at the Walter Rand Transportation Center in Camden, where passengers could catch trains to Philadelphia or Trenton.

STV Inc., which is conducting the current study, warned last July that publication of the draft version would be delayed for “additional field surveys for threatened and endangered species and historic resources.” The study is now stalled until some entity besides DRPA takes charge of the project.

Though NJ Transit might be considered a logical parent for the project, it faces at least two problems: a severe backlog of rail capital projects in the northern part of the state, which is more heavily populated; and a lack of identified funding due to the state’s struggle to renew its cash-strapped Transportation Trust Fund.