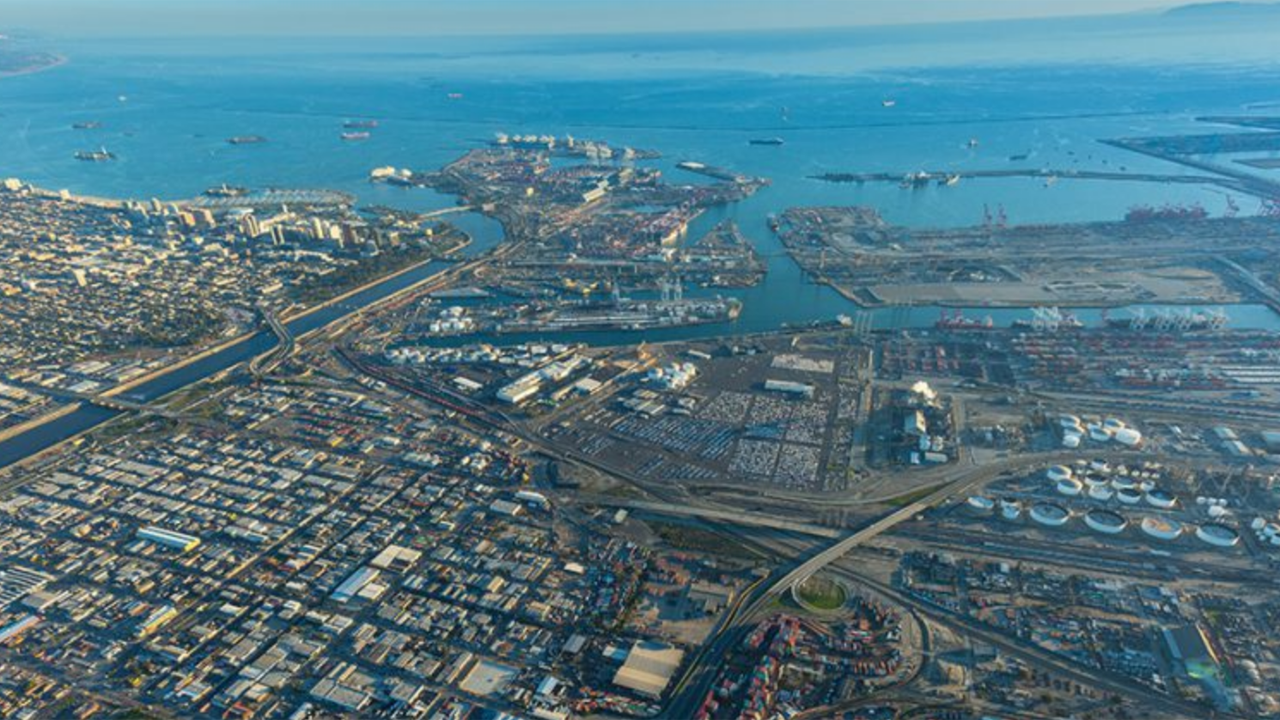 Aerial view of Pier B, courtesy of Port of Long Beach.

The move will help support the Port’s application for a federal Rehabilitation and Improvement Financing loan and potentially other federal funding programs.

According to the Port, the 82-acre Pier B rail facility currently serves as a storage and staging area for trains, and is used by Anacostia Rail Holdings’ Pacific Harbor Line (PHL), which provides rail dispatching and switching services. The approved project, which has been in the works for years, will reconfigure and expand the existing facility, located southwest of West Anaheim Street and the 710 Freeway. Its aim: to streamline rail operations and reduce bottlenecks.

The Final EIS/ROD (download below) was published in the Federal Register last month and explained that the “ability of the POLB [Port of Long Beach] to address increasing demand for cargo handling by rail to and from the Port is currently limited. Longer trains (8,000 feet or more) must be broken down off site into smaller units, called cuts, that are then moved into the Port to have them loaded via the existing POLB on-dock facilities because there is currently no space within the Port that can handle the assembly/disassembly of the longer trains. This movement of cuts requires track space, including active main line tracks, at varying locations in the Port. Expansion of the existing Pier B Rail Yard was identified by the POLB as the most efficient and cost-effective solution to address the Port’s rail needs with the least impact on the Port’s existing operations. The Pier B Rail Yard does not currently have space to handle 10,000-foot-long trains without using tracks outside the rail yard; these 10,000-foot-long trains are becoming more common as the industry evolves. Delays at grade crossings in the vicinity are caused by needing to use tracks outside the existing rail yard. Therefore, the proposed Project is needed for more efficient and rational rail operations. …”

Phase 1 construction, scheduled for completion in 2025, will double the capacity of the existing Pier B rail yard, according to the Port. The full project is expected to wrap up in 2032.

“Simply put, the Pier B On-Dock Rail Support Facility will move cargo faster and with fewer environmental impacts,” Port of Long Beach Executive Director Mario Cordero said during the Port’s project approval announcement on April 18. “We thank MARAD [U.S. Maritime Administration] for its work completing the EIS, which allows us to receive federal funding for a facility that will benefit the whole country.”

The Port of Long Beach in December 2016 released a draft Environmental Impact Report (EIR) on the project. Written responses to the comments received were included in the final EIR, which the Board of Harbor Commissioners approved in January 2018. In August 2019, the Port selected HDR to perform the final design work.

In December 2021, the project was awarded $52.3 million by the U.S. Department of Transportation (USDOT) under the Maritime Administration’s Port Infrastructure Development Program.