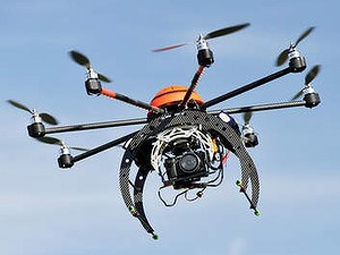 One need not look to the wild blue yonder to find the BNSF air force. Soon, it will be patrolling BNSF tracks from altitudes no higher than 500 feet, but not within three miles of any airport and always during daylight hours.

Such are the restrictions imposed by the Federal Aviation Administration (FAA) in granting BNSF authority March 12 to operate lighter than 55-pound drones—unmanned aerial vehicles (UAVs) as they are formally known. So far, BNSF—which was a pioneer in the design of Positive Train Control (PTC)—is the only railroad that has sought such FAA authority.

BNSF said it will use four versions of the drones, equipped with cameras, to inspect its track and monitor its trains. Other applications will be investigated.

An official of the Transportation Division of the International Association of Sheet Metal, Air, Rail and Transportation Workers (SMART), asking not to be identified, said SMART conductors could have claimed work associated with BNSF drone operations, but lost the opportunity when they voted down a tentative agreement with BNSF last year that focused solely on PTC. The agreement specifically mentioned drones as within the scope of work reserved for SMART-represented conductors.

That failed contract would have allowed BNSF, as part of a pilot project, to create a Master Conductor craft to monitor, for safety compliance, trains equipped with PTC. The monitoring was to be done from a fixed or mobile location rather than aboard trains. Such trains would operate locomotive-engineer-only.

Where such operations were commenced, BNSF would have fully protected affected conductors from furlough, and promoted many to the new craft of Master Conductor. The failed contract also would have assured all ground service workers represented by SMART higher pay and career income protection.

The union’s National Legislative Office led the effort to defeat the tentative agreement, telling affected conductors that members of Congress would provide a better protection package as PTC and other technologies are introduced. After the tentative agreement was voted down, one of the two congressional sponsors of the legislation was defeated at the polls. The legislation never received a committee hearing, and was declared dead-on-arrival by the Republican congressional leadership should it be reintroduced.

The union’s National Legislative Office also promised that Federal Railroad Administrator Joseph Szabo, a former SMART predecessor-union official, would bring forth a rule prohibiting railroads from reducing crew size even where PTC is in place. Szabo resigned in early 2015, the rule has yet to be published, and railroad attorneys say it likely would not stand judicial challenge as there is no data demonstrating such a rule would improve rail safety.

When remote control technology was introduced more than a decade ago, the United Transportation Union—now SMART’s Transportation Division—told members that new technology cannot be obstructed, but can be managed with innovative labor agreements. The UTU then negotiated such an agreement that reserved remote control work within yards and terminals for UTU-represented members, along with higher pay and income protection.

SMART currently has contracts in place assuring two-person crews, but those contracts are nearing expiration as they are decades old and keyed to the retirement of employees affected when the contracts were signed. Within the next decade there will be no contract protection for conductor assignments.

With those agreements in their twilight, and no federal legislation or federal rule to protect conductor work in the future, SMART has obtained from some state legislatures prohibitions on one-person crews in those states. Were the laws to become effective with the expiration of the labor protection agreements just mentioned, Congress could step in to make federal law permitting one-person crews preeminent (under provisions of the Constitution’s 10th Amendment). The reason would be to block the efficiency-scotching nature—the impediment to interstate commerce—of such checkerboard pattern state laws.

For the present, BNSF conductors, having voted down the tentative agreement that would have reserved for them work associated with drone operation, have no claim to such jobs. As they are created, those jobs will be up for grabs by the first labor union to capture them through a labor agreement. The Brotherhood of Locomotive Engineers and Trainmen already has a clause in its agreements with BNSF to capture remote control work outside yards and terminals should remote control operations be expanded.