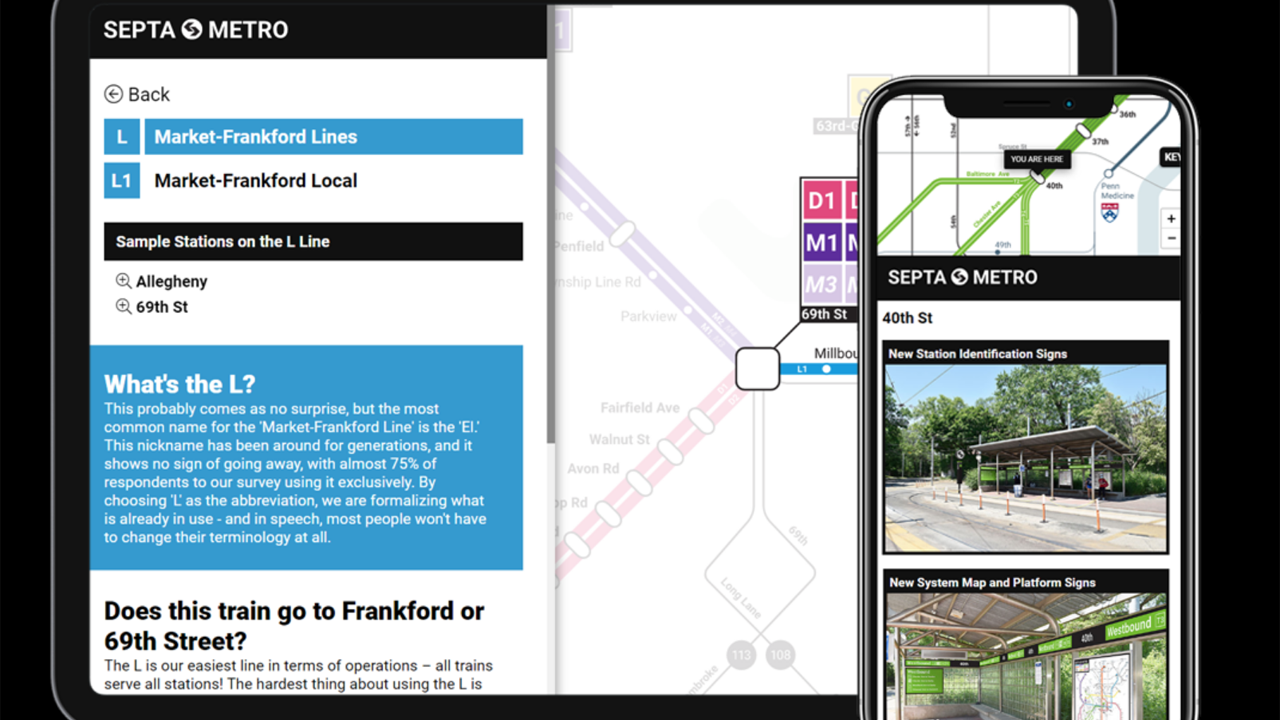 SEPTA reported this week that it is looking to group its Rail Transit Network—comprising the Market-Frankford Line, Broad Street Line and Norristown High-Speed Line, as well as the 10, 11, 13, 15, 34, 36, 101, and 102 Trolleys—under a single name: SEPTA Metro.

As part of its Wayfinding Master Plan launched in summer 2020, SEPTA reported this week that it is looking to group its Rail Transit Network—comprising the Market-Frankford Line, Broad Street Line and Norristown High-Speed Line, as well as the 10, 11, 13, 15, 34, 36, 101, and 102 Trolleys—under a single name: SEPTA Metro. (The new name does not apply to SEPTA’s bus and Regional Rail networks.)

“In our analysis of existing conditions, we found that SEPTA’s heavy reliance on long-form, technical terms was a barrier to accessibility,” according to the agency. “The use of inconsistent nomenclature—for example numbers for the trolleys but words for the Norristown High Speed Line—was also cited as a point of confusion and a large contributor to general inconsistency.”

To help standardize communications network-wide, “we are recommending that the same naming system be applied consistently for all lines,” SEPTA said. “This is essential not just for wayfinding, but for making sure riders understand the full extent of the system.”

The agency is proposing using single letter “lines” with a badge consisting of a square symbol with a single letter and unique color (see above). For example, SEPTA recommends keeping orange and blue for the Broad Street Line and Market-Frankford Line, respectively, because those colors are highly recognized; keeping green for the Routes 10, 11, 13, 34 and 36 because these trolleys are most commonly associated with the color; and keeping purple for the Norristown High Speed Line.

The recommendations are a result of a full year of outreach, research, workshops, audits, and conversations, according to SEPTA.

“Over the next few years, we’ll finalize the plan’s recommendations, build a full manual of standards, confirm the road map for how we implement an entirely new wayfinding system, and begin the roll-out of the new system,” SEPTA said.

The Philadelphia Enquirer has reported that it is “expected to cost $40 million through the 2023 fiscal year, which ends in June of that year, to design and implement a new wayfinding system.”

SFMTA plans to extend Muni Metro service until midnight starting Oct. 2, as part of its ongoing rail recovery and COVID-19 service expansion. Monday through Saturday, the last trains will depart their terminals before midnight and reach the end of the subway tunnel, in either direction, by midnight. The last eastbound Muni Metro train will depart daily at 11:50 p.m. and last westbound train at 12:00 a.m. Sunday night service will run until about 10 p.m.

This service extension also allows Muni to provide late-night connections to Bay Area Rapid Transit and preserve “a large part of our late-night subway maintenance window,” the agency reported. Since May 2021, rail service has run until 9 p.m. daily to permit maintenance work.

“Prior to the pandemic, the subway maintenance window was too short, causing work to be delayed or deferred,” SFMTA said. “The subway shutdown during the pandemic allowed us to advance this work significantly.”

WMATA has rebuilt deteriorating outdoor platforms and added safety features at the Greenbelt, College Park, Prince George’s Plaza and West Hyattsville stations, which had been closed since late May. The work is part of a four-year, 20-station Platform Improvement Project, under WMATA’s 10-year, $15.5 billion Capital Improvement Program. The project primarily uses extended shutdowns, rather than single tracking, to provide contractors with 24-hour access to selected work sites, the agency said.

According to WMATA, the four stations also include new fare-gates, as part of the agency’s system-wide upgrade initiative.

“We’re excited to welcome customers back to safer and more convenient stations, all while offering more trains and buses, longer hours, and lower prices,” WMATA General Manager/CEO Paul J. Wiedefeld said. “Metro’s aggressive capital program is making the system safer and more reliable for the entire region, and we’re now just three stations away from completing our goal of rebuilding 20 outdoor stations in need of these critical repairs.”

Reconstruction of the Cheverly, Landover and New Carrollton stations will be completed in summer 2022.