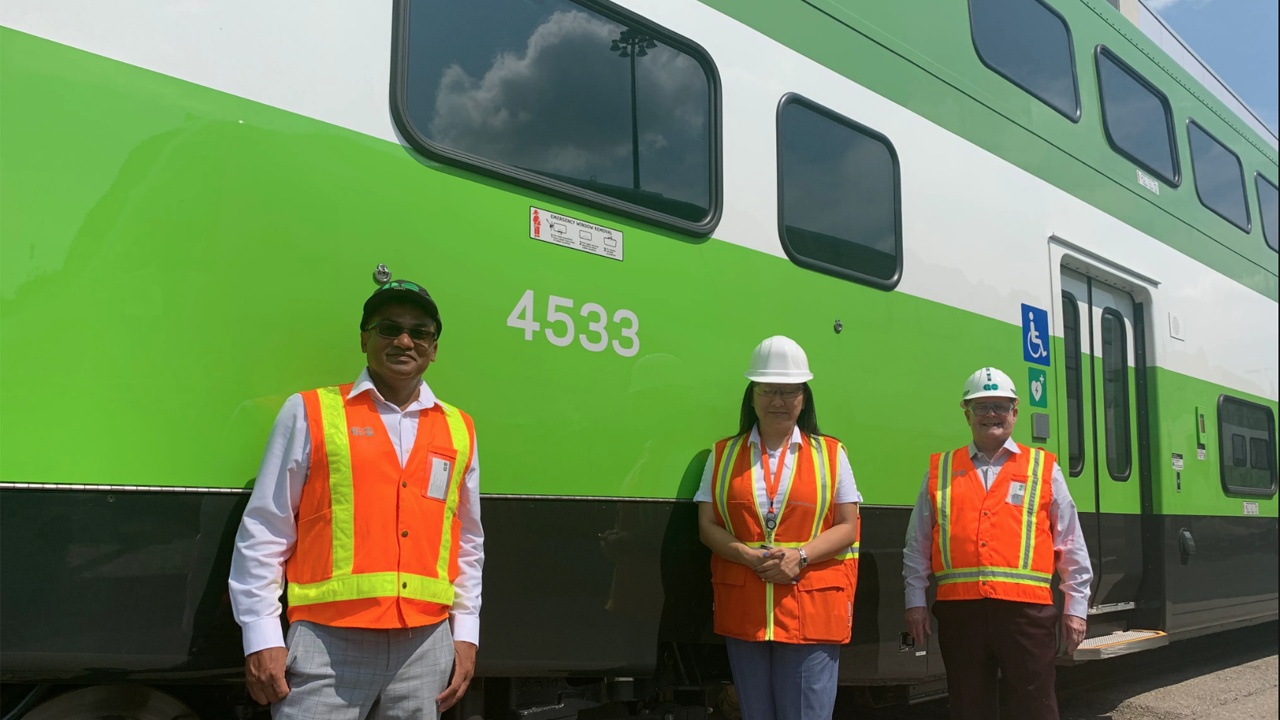 Metrolinx has now received all 36 GO Transit bilevels from Alstom, which acquired Bombardier Transportation earlier this year. Bombardier received the order in 2019 as an add-on to a 125-car order in 2016.

“We are fortunate to have these additional trains before downtown Toronto office towers reopen because they will be part of our expanding service in the months and years to come,” Metrolinx Director of Rail Fleet and Facilities Maintenance Faye Chen Naden said.

The cars were manufactured in Thunder Bay, Ontario—971 of GO Transit’s bilevels have been built there since 1975—and their arrival brings the new fleet total to 364 cars equipped with Crash Energy Management (CEM) technology and remote diagnostic systems, according to Steve Cavanaugh, Metrolinx Director of Fleet Engineering and Asset Management.

“The design and structure of this new car represents a quantum leap in commuter car crashworthiness, which was awarded the Railway Association of Canada award for safety for this design,” he reported.

Starting Aug. 30, Caltrain will offer 104 commuter trains per weekday, including hourly all-stop local trains throughout the day and the return of Baby Bullet express trains. As an additional rider incentive, it is discounting all non-Go Pass fares by 50% during September. Caltrain is owned and operated by the Peninsula Corridor Joint Powers Board and provides service from San Francisco to San Jose, Calif. (See map below.)

“The new level of weekday service, higher than any point in Caltrain’s history, will provide increased service and frequency throughout the day and into the evening,” Caltrain reported. “Service during the weekday peak commuting hours (6 a.m. to 9 a.m., 4 p.m. to 7 p.m.) will be increased to four trains per hour with the return of hourly Baby Bullet express trains. Limited-stop train service during the middle of the day will provide riders with a faster alternative, while half-hourly service until 11 p.m. will provide better local service into the late evenings, in keeping with the goals of the Framework for Equity, Connectivity, Recovery and Growth. Another goal of the framework captured by the new schedule is a move toward clock-face scheduling, so trains arrive at regular and predictable intervals, simplifying the riding experience.”

Caltrain is also restoring the third Gilroy train, which includes direct service to College Park station. Additionally, Saturday and Sunday service will now be identical, adding two more roundtrips in morning and late evening on Sundays. The new timetable improves BART connections at the Millbrae Transit Center, according to Caltrain.

In other news, Caltrain announced in June that the launch of electrified service will be delayed two years, until late 2024, due to “complications in the installation of signal systems, unforeseen conditions under Caltrain’s tracks, and the coronavirus (COVID-19) pandemic, which severely disrupted supply chains necessary to the project.”

Starting Sept. 5, WMATA’s Metrorail service will include more trains running during off-peak hours with average wait times ranging between 2-7 minutes any time of day. Trains will also run longer, closing later overnight on weekends (Fridays and Saturdays until 1 a.m.), and opening earlier on Sundays (7 a.m.), according to the agency. The changes were approved by the WMATA Board of Directors in June.

Rail and bus service improvements will bring overall service to near pre-pandemic levels, providing 97% of pre-Covid service levels on Metrobus and 91% on Metrorail, according to WMATA. The agency also reported that it is offering up to a 50% discount on selected unlimited pass products between Sept. 16 and Oct. 15.

“As the region goes back to work and school, we will be ready with service that is convenient any time of the day and offers the flexibility riders need,” WMATA General Manager Paul J. Wiedefeld said.

In other news, WMATA announced earlier this month that it would redevelop the West Falls Church (Va.) Station site.