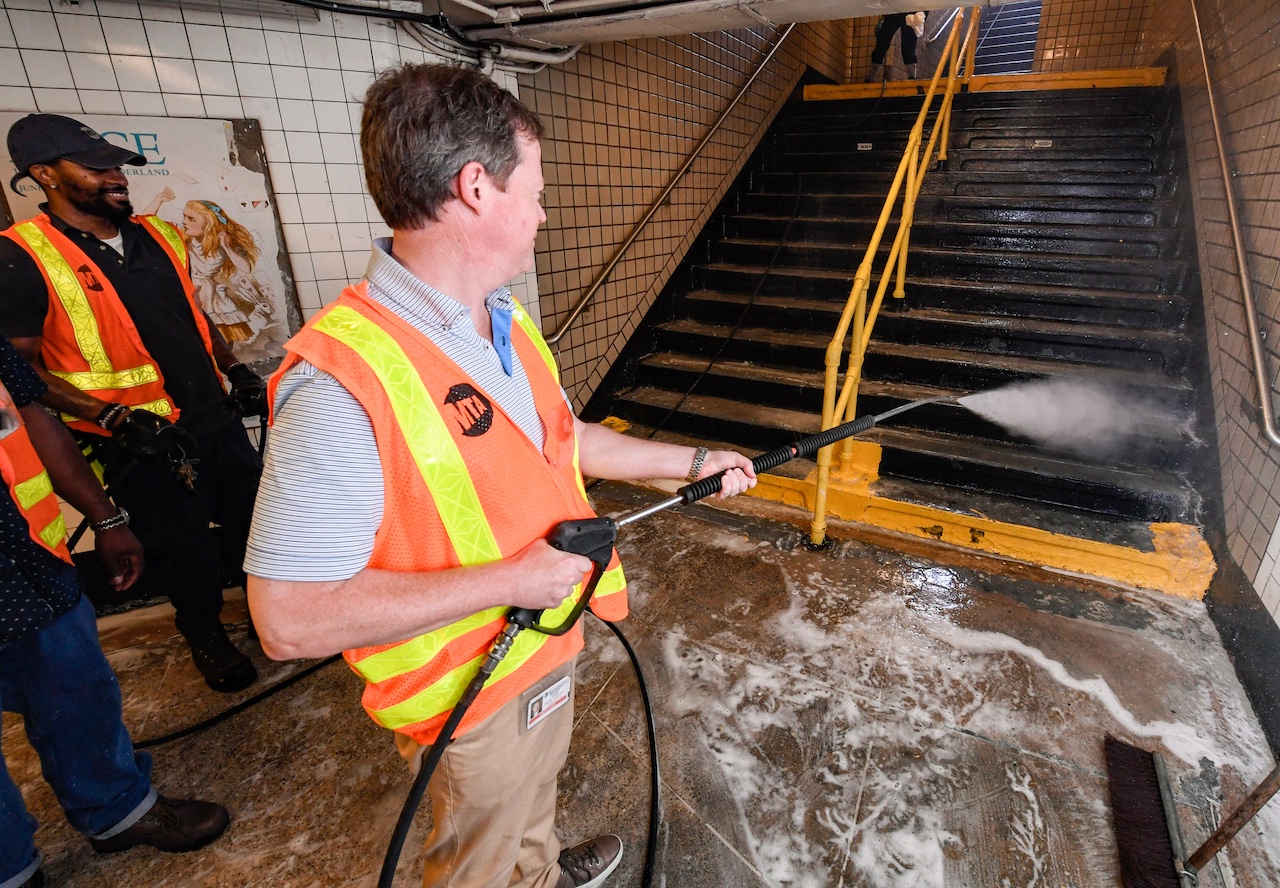 NYCT crews have completed deep cleaning at six out of the nine Bronx stations with the final three expected to be completed by the end of 2022.

NYCT on Nov. 29 launched its “Station ReNEWvation Program,” which combines cosmetic upgrades at stations to planned weekend outages. A soft launch of the program took place over the summer on B and D lines in the Bronx, which included deep cleaning nine stations along the Grand Concourse Line while the stations were closed for state of good repair work.

According to NYCT, as part of the “Station ReNEWvation Program,” a component of the agency’s Faster, Cleaner, Safer plan announced in October to increase customer satisfaction by 10% by June 2024, when stations are scheduled for planned weekend outages, NYCT will now “piggyback” deep cleaning work. The stations, NYCT says, are chosen by the agency’s Stations team, who identify stations prior to work beginning. Deep cleaning and cosmetic upgrades include power washing the station; removing gum from floors, benches, staircases or columns; repainting columns; or retiling platforms or walls where necessary. Following initial deep cleaning and repairs, routine and specialized cleaning will maintain this level of cleanliness, NYCT said.

“We want customers to feel proud of their home station, and this program aims to do just that,” said NYCT President Richard Davey. “I said from my first day on the job, increasing customer satisfaction was my North Star. When we spoke to customers on areas NYCT could improve, enhancing the station environment was a popular answer. The Stations team has done a great job identifying the stations with the greatest need, and we look forward to refreshing those stations in the new year.”

According to the agency, NYCT crews have completed deep cleaning at six out of the nine Bronx stations with the final three expected to be completed by the end of 2022. NYCT will expand the program in 2023 to Brooklyn, Queens and Manhattan stations with a goal of refreshing 50 stations within the program’s first full year.

In the first quarter of 2023, NYCT will begin refresh work at the following 12 stations:

According to a Boston Herald report, the MBTA says the first phase of its South Cost Rail project, which is restoring commuter rail service from Boston to southeastern Massachusetts, reached the halfway point this summer.

A recently released MBTA/Massachusetts Department of Transportation (MassDOT) fact sheet on the project states, “exciting signs of progress are visible along the right of way at Taunton, Fall River and New Bedford” – the only major communities within 50 miles of Boston that don’t currently have commuter rail access. “Stations and track work are approaching completion on the Fall River Secondary Line, as that contract was awarded first,” the report states, according to the Boston Herald report.

According to the document, and as reported by the Boston Herald, “work on the longer Middleborough Secondary/New Bedford Main Line is progressing, as well. Construction crews have laid 56,000 linear feet of track, completed 12 of 18 station crossings and stations in Middleborough and New Bedford are visible.”

“It’s been many years since the vision of a restored South Coast Rail began to take shape,” the MBTA document stated. “With completion of the Fall River Line a few months away, and the New Bedford Line to follow, the project team will prepare for training crews and testing equipment and infrastructure next summer.”

The first phase of the South Coast Rail project, which is being funded by approximately $1 billion in state revenue funds, will continue service to nine existing stations on the Middleborough/Lakeville Line and add six new stations, including Middleborough, East Taunton, Freetown, Fall River Depot, Church Street in New Bedford and New Bedford.

According to the Boston Herald report, work on the Fall River Secondary kicked off after May 2020, “the month the MBTA awarded a roughly $159 million contract to Skanska DW White JV, which is set to wrap up major construction on the line’s stations in Fall River and Freetown this fall.”

The remaining work, which includes paving, landscaping, fencing, site cleanup and utilities, is expected to be completed in December or early next year, at which time the contractor, partnered with the MBTA and rail operator Keolis Commuter Services will go through a “rigorous testing and commissioning process of all the equipment,” the MBTA document stated, according to the Boston Herald report.

For the Middleborough Secondary/New Bedford Line, a $403.5 million construction contract was awarded to SRC Contractors in August 2020. The package includes building the two lines, which the MBTA says is expected to be completed by the start of South Coast Rail service, and the signal and communications system for the entire corridor, according to the Boston Herald report.

According to the Boston Herald report, “funding has not been secured for the ‘full build project,’ which will extend commuter rail service on the Stoughton Line to the New Bedford and Fall River Lines, connecting more communities, including Easton and Raynham, to Boston,” the MassDOT website stated.

“The full build presents more challenges related to wetland impacts, complex engineering, electrification and cost,” the website stated. “An anticipated start date will be developed as the project advances.”

According to Amtrak’s recently released FY22 summary, the railroad “continued rebuilding its business and began a new era of intercity passenger rails investment in FY22 by growing ridership by 89%, restoring and expanding services across the nation, and launching major infrastructure projects.”

“From hiring a record level of employees to building a new Capital Delivery organization focused on modernizing infrastructure, major stations and trains, Amtrak is creating the capacity and talent to bring sustainable investments and improvements to intercity passenger rail communities across the nation,” the railroad said in a press release.

“We worked hard to restore service and grow ridership in the face of lingering impacts from the pandemic, all while modernizing our assets to make train travel a better experience for customers,” said Amtrak CEO Stephen Gardner. “Thanks to the hard work and dedication of every employee and the bipartisan support and collaboration from the Biden Administration, Congress and our state partners, Amtrak brought more trains back to more places and expanded our network to connect more people across America.”

According to the FY22 summary, demand for Amtrak service returned strongly in the second half of FY22 following last winter’s Omicron wave, with overall ridership reaching about 85% of pre-COVID levels. Northeast Corridor (NEC), State Supported and Long-Distance ridership grew 110%, 85% and 56%, respectively, compared to FY21 ridership. Based on current forecasts, Amtrak expects ridership and revenue to improve above 90% of pre-COVID levels by the end of FY23, “bucking the trend of continued lower ridership seen on most commuter railroads and public transit systems.” The increase in ridership and revenue, Amtrak says, helped the railroad reduce operating losses by $145 million compared to anticipated FY22 levels, “setting the stage for improving financial performance for train operations over the years ahead.”

“Ridership exceeding our expectations shows that travelers are flocking back to Amtrak for intercity trips and that the United States is ready for more and better passenger rail service,” said Amtrak Board Chair Tony Coscia. “We are doing our part to help deliver a new era of passenger rail improvements and low-carbon mobility. As we begin the new year, Amtrak will prioritize service improvements for customers, expand our network and advance our infrastructure and fleet modernization programs.”