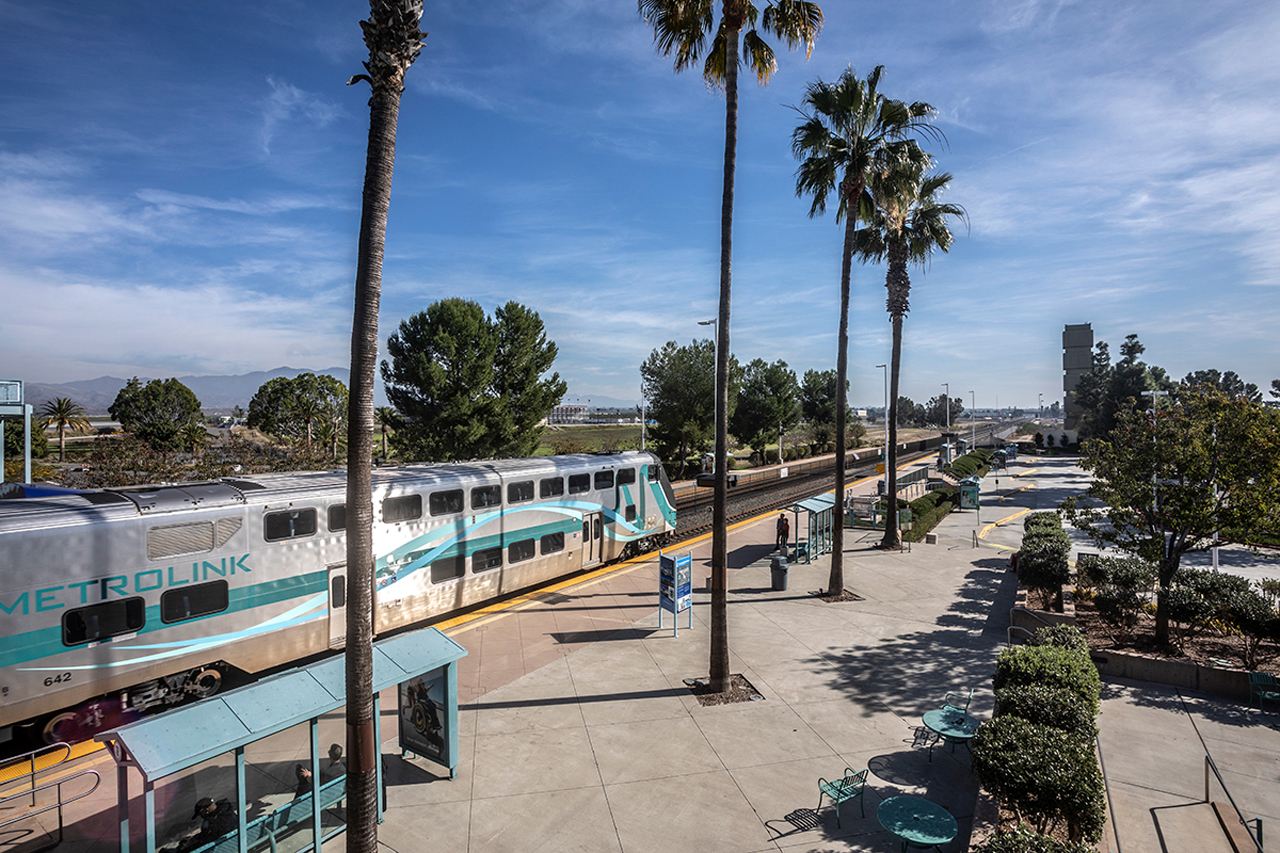 Metrolink, in partnership with Caltrans and the U.S. Geological Survey, will test earthquake early-warning system technology along the 91/Perris Valley commuter rail link between Perris and Riverside.

Metrolink, in partnership with the California Department of Transportation (Caltrans) and U.S. Geological Survey (USGS), will pilot earthquake early-warning technology along the 91/Perris Valley commuter rail line between Perris and Riverside (see map above).

It will be deployed in two phases. The first phase will automatically process data from USGS-operated ShakeAlert® and send notifications to train crews in the impacted area, including train handling instructions based on the severity of the earthquake detected. (ShakeAlert® does not predict earthquakes; a ShakeAlert® message indicates that an earthquake has begun, and shaking is imminent, according to Metrolink.)

The second phase, which is under development, will use data from ShakeAlert® to notify Metrolink’s Positive Train Control (PTC) system that an earthquake has occurred. The technology can “rapidly slow or stop the Metrolink train even before ground shaking is felt,” and will also provide “enhanced data to support inspection of the rail network and resumption of service following an earthquake,” the commuter rail agency said.

“This program is another initiative by Metrolink to move technology forward in a real-world environment to help protect our riders and crews, and reflects our position as a leader in rail safety,” said Darren Kettle, who in July was named CEO of Metrolink.

The technology was tested on Bay Area Rapid Transit in northern California, where it has been in full operation for a year, according to Metrolink.

“The consolidated [single] platform will make it easier to identify and board the next available train as quickly as possible, and simplified and extended tracks allow the Authority to run longer cars,” MTA reported. “This, in turn, increases customer capacity by 20% during peak times. Prior to the pandemic, the 42nd Street Shuttle carried some 80,000 customers daily, including upwards of 10,000 per hour during morning and evening rush periods.”

“This project had been talked about for literally decades and now we’ve finally gotten it done,” MTA Acting Chairman and CEO Janno Lieber said. “The new, fully ADA-accessible Shuttle is easier to navigate, with straightened tracks and a single, wider platform that will allow us to run longer trains during peak hours and speed up boarding times. This is a huge win for our customers as they continue to return to the system.”

“I can tell you from personal experience that navigating the shuttle transfer before this modernization was incredibly challenging,” MTA Chief Accessibility Officer Quemuel Arroyo said. “The improvements we’re celebrating today [Sept. 10] are transformative and more accessibility upgrades are forthcoming. We’re taking a phased approach to improving accessibility at 42nd Street that includes accessibility at both ends of the 42nd Street Connector—bringing us another step closer to making 100 key stations accessible.”

VTA on Sept. 12 restored the full Blue Line from Baypointe to Santa Teresa, including all stops in between (see map below). On Sept. 4, Blue Line service from Baypointe to the Children’s Discover Museum resumed, and service also expanded on the Green Line from Old Ironsides to Diridon Station. The Orange Line began full operation from Alum Rock to Mountain View on Aug. 29, and the Green Line started running from the Civic Center to Old Ironsides on Aug. 30. VTA said on Sept. 10 that it anticipates opening the rest of the Green Line “very soon.”

Light rail service had been suspended since the May 26 shooting at VTA’s Guadalupe Yard. There were 10 fatalities and multiple injuries. The gunman, a VTA employee, was among the dead.

VTA has also reported that “free fares, which were originally scheduled to end Sept. 12, will continue for light rail through September 30.”

For the next eight months, Sound Transit Fare Ambassadors will check for fares on Link light rail and Sounder commuter rail serving the Seattle and Central Puget Sound area in Washington state.

They are replacing fare enforcement officers “as part of Sound Transit’s ongoing efforts to create more equitable fare collection processes,” according to the agency.

The pilot program is a result of rider and community member feedback expressing “discomfort with fare enforcement officers who resemble law enforcement,” Sound Transit reported. “In response, Fare Ambassadors wear bright yellow caps, and carry yellow messenger bags that make them easy to recognize. Their focus is on passenger education and customer service rather than enforcement. …”

Fare Ambassadors enter trains from both ends of the car, and ask every rider for proof of payment as they work their way toward the center, according to the agency, which noted that ambassadors use hand-held devices to check fares. “This is the same process that had been used by fare enforcement officers previously to ensure equal treatment of all passengers,” the agency said.

Citations are not being issued during the pilot.

Fare Ambassadors also give riders they interact with a card that includes a QR code linking to the fare engagement website, where riders can complete a satisfaction survey.

When the pilot concludes, staff will evaluate the results, including farebox recovery. They will also propose policy changes—such as lowering fines, implementing a new citation resolution process without court adjudication, and making the Fare Ambassador positions permanent—for Sound Transit Board consideration.

“Fare revenues are critical for operating a fast-expanding regional transit system that increases mobility and opportunities across the region, especially for populations that depend most on transit,” Sound Transit CEO Peter Rogoff said. “It is critical that we foster a welcoming environment for every rider and ensure that transit is accessible and affordable for all. Our initiative includes expanding access to more affordable ORCA LIFT fares for low- income riders, as well as our partnership with King County Metro to provide subsidized annual passes to qualified riders. The Fare Ambassador Pilot Program supports this ongoing transformation and reflects Sound Transit’s deep commitment to equity.”