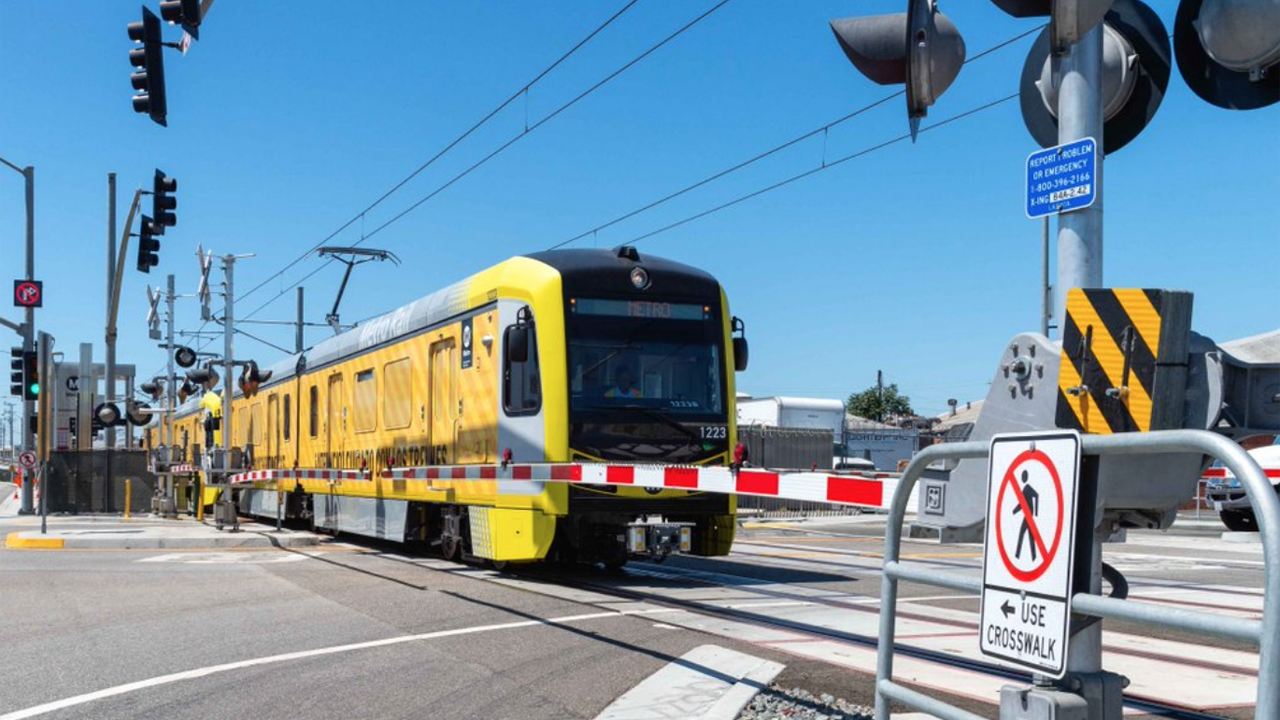 “Our new fare capping policy will save our customers money and ensure that no one overpays,” LACMTA CEO Stephanie Wiggins said on Dec. 2. (LACMTA Photo, Via Twitter)

The Los Angeles County Metropolitan Transportation Authority (LACMTA) Board approves a new fare policy. Also, the North Carolina Department of Transportation (NCDOT) completes the first phase of construction for a new Amtrak station in Charlotte; Operation Lifesaver, Inc. (OLI) awards more than $140,000 in grants to eight transit agencies in six states; and Santa Clara Valley Transportation Authority (VTA) receives authority to pursue federal funding for up to 50% of the cost of Phase II of the BART Silicon Valley Extension Project.

The LACMTA Board on Dec. 2 signed off on a new policy that “simplifies and streamlines” the agency’s fare structure. Expected to take effect by summer 2023, the policy caps fares so no rail or bus rider overpays and eliminates the need for paying up-front for multi-day passes.

LACMTA riders using a TAP card “will pay as they go and will never pay more than $5 each day or $18 each week for unlimited rides, which is less than the regular price of Metro’s regular 7-Day and 30-Day passes,” the agency reported. “Once customers reach the daily or weekly fare cap, they will not have to pay additional fares. The new policy will make 1-Day, 7-Day and 30-Day passes unnecessary, so they will be eliminated, making the fare structure less complicated for customers to use and for Metro [LACMTA] to administer.”

According to the agency, the fare for buses and trains remains at $1.75 (which includes a two-hour and one-directional LACMTA to LACMTA transfer). Students in grades K-12 will see their base fare drop from $1 to 75 cents, and college and vocational students will see their base fare drop from $1.75 to 75 cents to match the fare discount offered to seniors and disabled persons, LACMTA reported. Student fares will be capped at $2.50 per day and $6 per week. The base fare for seniors and riders with disabilities will remain at 75 cents during peak hours and 35 cents during off-peak hours, and the daily cap will remain at $2.50. Under the new plan, they will now have access to a lower weekly cap at $5.

Riders enrolled in the Low-Income Fare is Easy (LIFE) and GoPass programs will not be affected by the new fare structure, LACMTA said. LIFE offers 20 free rides per month and deeply discounted fares to low-income riders on LACMTA and 13 other local transit providers; GoPass provides free transit passes to K-12 and community college students at 50 participating school districts and 14 participating community colleges in L.A. County.

“Fare capping is one of a suite of programs we’ve instituted to lower transportation costs for Angelenos and make our system more accessible and equitable for everyone,” LACMTA CEO Stephanie Wiggins said.

The LACMTA Board on Dec. 2 also approved the staff recommendation to extend the sale of 7-Day and 30-Day passes at a 50% discount until June 30, 2023, or until fare capping is launched, so that customers do not see an increase in cost, according to the agency. The pass discount was slated to expire on Dec. 31, 2022.

The train was “used to test clearances for the newly built boarding platform,” NCDOT spokesperson Lauren Haviland told WCNC, which reported that the first phase “finished on schedule and within budget, estimated to be about $86.38 million.” The funding included $30 million from the federal government, $47,350,000 from the state, and $9,034,986 from the city of Charlotte.

Once complete, the station will provide Amtrak riders with direct access to uptown Charlotte, the CityLYNX Gold Line, bus routes, and other local transit, WCNC reported. It is located near West Fourth Street and West Trade Street, close to the Greyhound Bus Station.

Currently, Amtrak riders arriving at and departing from Charlotte “use an older station on North Tryon Street, which is served by a single CATS bus route and has limited accessibility for pedestrians,” according to the media outlet.

The city of Charlotte is responsible for the Gateway Station’s $52 million second phase, which covers “construction of a multi-story, and multi-use building that will feature railroad operations in addition to space for retail, residential, commercial and dining accommodations,” WCNC reported.

“We hope to see the Phase 2 work complete and trains delivering passengers to the new station in the next few years,” Haviland told the media outlet.

“Like the existing Amtrak passenger rail service, trains will use rails operated by Norfolk Southern Railway to reach the station,” according to WCNC. “With services provided by Amtrak, NC By Train is a state-run service providing multiple trains throughout the day on its Piedmont service, which connects Raleigh and Charlotte with stops in Cary, Durham, Burlington, Greensboro, High Point, Salisbury and Kannapolis. The daily Crescent train provides service to Atlanta and New Orleans as well as Washington and New York, which is also served by Amtrak’s Carolinian. NC By Train has operated since 1990.”

OLI on Dec. 1 reported awarding eight transit agencies grants to fund public awareness and education projects and campaigns to promote rail safety. The grants range from $7,400 to $20,000 and require each agency to provide a 25% match. The educational campaigns will use OLI-approved materials and logos.

And the winners are:

“Congratulations to these eight transit agencies, whose grant projects will bring targeted, creative public outreach campaigns to their communities for people driving and walking near commuter trains, light rail or streetcars,” OLI Executive Director Rachel Maleh said. “OLI is fortunate to receive funding for these grants from the Federal Transit Administration (FTA).”

“FTA’s continuing support to Operation Lifesaver is essential for rail transit safety education and outreach,” FTA Administrator Nuria Fernandez said. “We are proud to support these creative projects that will help raise awareness about the importance of safety around rail lines among transit riders and others in their communities.”

California’s VTA on Dec. 1 reported receiving authority to pursue federal funding for up to 50% of the cost of the BART Silicon Valley Phase II Extension (Phase II Project). The funding could be as much as $4.6 billion, if needed, according to the transit agency.

The Phase II Project will expand BART (Bay Area Rapid Transit) service six miles from the Berryessa Transit Center into downtown San José and ending in the city of Santa Clara (see map below). VTA in November submitted a request to the FTA to transition the Phase II Project from the Expedited Project Delivery (EPD) Pilot Funding Program to the New Starts Funding Program, which “allows for a substantially higher federal contribution, allowing VTA to make a preliminary federal funding request of 49% (vs. 25% for EPD). VTA participated in the FTA’s New Starts Funding Program for the BART Phase I Berryessa Extension Project, where the federal contribution was just under 40%.”

The FTA’s approval for the Phase II Project to re-enter the federal Capital Investment Grants New Starts Funding program “also approves past eligible expenses for potential grant reimbursement back to March 2016, as well as for all remaining work on the project, for the estimated total project cost of up to $9.3 billion,” VTA reported. “With consideration of the FTA’s actions, VTA’s Board of Directors authorized the execution of contract amendments for up to $460 million at its Thursday [Dec. 1] night meeting, including the purchase of the tunnel boring machine and moving into early construction activities.”

Kiewit Shea Traylor has the tunnel and trackwork contract for the project and plans to procure a tunnel boring machine, approximately 54-feet diameter, to bore a five-mile tunnel under downtown San Jose. VTA said it plans to begin the federal funding application as soon as summer 2023, “after a final cost estimate and funding plan is worked out. VTA is seeking an additional $750 million from the state’s transportation funding program for major transit projects as the last key funding piece.”