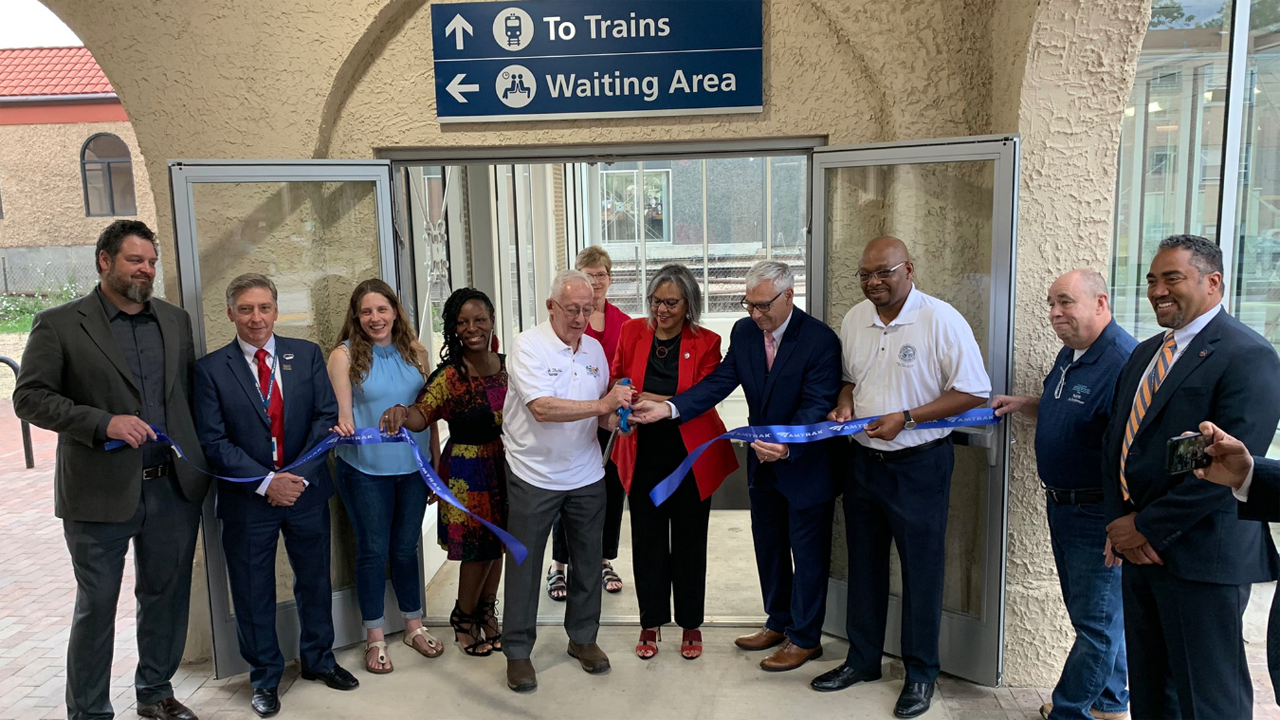 U.S. Rep. Robin Kelly (D-Ill.) on June 25 reported on Twitter: “This morning I attended the ribbon-cutting ceremony for the newly renovated Amtrak platform at the Homewood Station. Commuters in the [Chicago] South Suburbs deserve safe, accessible and well-maintained public transportation, and this project does just that.” (Photograph Courtesy of Rep. Kelly via Twitter)

On June 25, Amtrak held a ribbon-cutting ceremony to unveil the upgraded Homewood, Ill., station, which was built in 1923 for Illinois Central Railroad.

The project, announced in September 2020, was part of Amtrak’s multi-year effort to bring its more than 500 stations into compliance with the Americans with Disabilities Act (ADA) of 1990.

On the west side of the tracks, Amtrak replaced the stairway from the station to a pedestrian tunnel and built an enclosed ramp to the tunnel. The tunnel, which leads to Amtrak and Metra platforms, runs under two Metra Electric catenary-equipped tracks, two Amtrak-leased non-electrified tracks, and four CN main and yard tracks.

Amtrak also constructed a new 650-foot boarding platform to serve trains on the Chicago-Carbondale Illini and Saluki and Chicago-New Orleans City of New Orleans routes. The new platform is eight inches above rail height to ease rider access and deployment of on-train technologies, such as lifts or ramps. The new platform serves two tracks, allowing simultaneous northbound and southbound service.

ADA improvements were also made inside the station, and a level path was built between the building, parking and the ramp entrance to the tunnel.

Amtrak used $15 million in federal capital funds from the ADA and Federal Railroad Administration (FRA) for the project.

The LACMTA Board has signed off on two staffing contracts for a pilot transit ambassador program, which is slated to start by this fall and run for up to five years. Strive Well-Being Inc., a Small Business Enterprise firm, and RMI International Inc. (RMI), a Minority Business Enterprise firm, will provide up to 300 ambassadors, who will be on board trains and buses and in stations to greet riders and to help them navigate the LACMTA system, pay fares and download agency apps. The ambassadors will complete LACMTA training covering cultural and situational awareness, unconscious bias, disability awareness, customer service, and trauma-informed response, and other personal- and public-safety courses. The contract for Strive is valued at $27.76 million; for RMI, $95.09 million.

The ambassador program, part of LACMTA’s Customer Experience Department, is an addition to the security, law enforcement, crisis response, and homeless outreach “that advance the goal of a safer public transit system,” the agency said.

The program aims to have ambassadors working from 5 a.m. to 9 p.m. Monday through Friday, from 8 a.m. to 8 p.m. on weekends, and during special-event hours. The ambassadors will wear uniforms, so riders can easily identify them, and be equipped with cell phones and radios to contact appropriate LACMTA staff for assistance.

“It is our top priority to improve the customer experience—including making sure our riders feel safe,” LACMTA CEO Stephanie N. Wiggins said. “In the coming months, we expect customers will see a noticeable difference with our transit ambassadors in place. Once they deploy, transit ambassadors will greet riders and help our customers have positive interactions with our system. Ambassadors will also work closely with community-based crisis intervention teams and be able to call dedicated safety personnel when needed quickly.”

“This pilot program will be a win-win for our riders and employees when it launches later this year,” LACMTA Board Chair and Los Angeles County Supervisor Hilda L. Solis said. “Transit ambassadors on our trains, buses and at key transit hubs … will play a critical role in making our system feel welcoming for all and in bringing back ridership.”

“I am grateful to the Public Safety Advisory Committee, which has helped shape this transformative initiative to make Metro safer and more enjoyable for all of our riders,” said Janice Hahn, Los Angeles County Supervisor and LACMTA Board Member.

Metrolinx on June 24 reported that it is advancing an approximately C$1.4 billion project to extend GO commuter rail service east of Oshawa into Bowmanville (see map above). The procurement process to identify a construction manager kicked off with a Request for Proposals (RFP) released in April 2022.

All four stations along the Bowmanville Extension—Thornton’s Corners East, Ritson Road, Courtice and Bowmanville—will be pursued through Metrolinx and the province of Ontario’s Transit Oriented Communities (TOC) program.

Annual boardings are expected to reach 4.9 million in 2041, according to Metrolinx.

New York MTA and accessibility advocates have reached a class action settlement, resolving two lawsuits: Center for Independence of the Disabled, New York, et al. v. Metropolitan Transportation Authority, et al. No. 153765/2017 (N.Y. Sup. Ct. N.Y. Co.) and De La Rosa et al. v. Metropolitan Transportation Authority et al. No. 19-cv-04406 (ER) (S.D.N.Y.). Under the terms of the agreement, MTA said it will add elevators or ramps “to create a stair-free path of travel at 95% of the currently inaccessible subway stations by 2055.” The agreement, it noted, is subject to court approval, a notice period where class members will have the opportunity to comment, and a fairness hearing.

MTA has 472 subway stations plus 21 Staten Island Railway (SIR) stations for a total of 493 stations. Of those, 131 are fully accessible to customers with disabilities, via elevators and ramps, including five SIR stations.

“It is my pleasure as an advocate for accessibility, after decades of advocacy and hard work by disability-related stakeholders, to celebrate the commitment to access for all who use New York City’s subway system operated by the MTA,” said Dr. Sharon McLennon-Wier, Executive Director of Center for Independence of the Disabled, New York. “Everyone who lives, works or visits New York City and our amazing state will benefit from the promise of universal access that our work with the MTA on this settlement agreement will afford our community. This took a collaborative approach and dedication by numerous disability advocates who envisioned a more accessible city for all New Yorkers.”

“This is a seminal moment for accessibility in the New York City transit system,” MTA Chief Accessibility Officer and Senior Advisor Quemuel Arroyo said. “For far too long, the MTA and accessibility advocates have appeared at odds over a goal that we in fact share, making the transit system fully accessible. This settlement is not just the unveiling of a game-plan, but the start of a closer collaboration between the MTA and advocates to achieve our shared goal, to ensure that everyone has the ability to ride mass transit without needing to plan around accessible stations.”

MTA has completed accessibility projects at 15 subway stations since 2020; has awarded contracts for another 22 stations; and has an additional 13 station projects in procurement.

“Even during the dire financial crisis brought on by the pandemic, the MTA prioritized accessibility, leading to the completion of 15 accessibility projects,” MTA Chair and CEO Janno Lieber said. “There will be 81 more projects in progress by the end of the 2020-2024 capital plan, which includes a historic $5.2 billion dedicated to accessibility upgrades. These commitments, combined with recently enacted zoning that incentivizes private developers to incorporate station accessibility projects into their buildings, will help us achieve a fully accessible transit system much faster than ever before imagined.”

“During the pandemic, our transit workers were heroes, showing up while everyone was staying home—putting not only their health and the health of their families at risk, but also risking their lives as subway crime increased,” Gov. Hochul said. “New York’s transit workers have always been there for us and now it is our job to be there for them. No one should be subjected to physical violence or harassment in the workplace, and today [June 27] we are taking an important step in protecting the men and women who keep our subways and buses running.”

“Today’s [June 27] bill signing is enormously appreciated by all of us at the MTA; transit workers are heroes who deserve a safe workplace,” New York MTA Chair and CEO Janno Lieber said. “But the work on the issue of public safety is not complete. New laws need to be enforced so our workers can run the best public transportation system in the country and move New Yorkers to where they need to go.”

TransLink has started work on a new real estate program that will allow it to build residential, commercial or mixed-use developments near transit through partnerships with both the public and private sectors. The program is endorsed by the TransLink Board and the Mayors’ Council on Regional Transportation, which comprises representatives from each of the 21 municipalities in Translink’s metro Vancouver service area, as well as Electoral Area ‘A’ and the Tsawwassen First Nation.

Any potential development project would be accompanied by comprehensive analysis, including an assessment of how the project would enhance transit access, build long-term transit ridership, and support the regional growth strategy, according to TransLink, whose operating companies include British Columbia Rapid Transit Company, which runs SkyTrain and West Coast Express service; Coast Mountain Bus Company, which runs SeaBus and more than 96% of the region’s bus service; and Transit Police.

“While we continue to bring riders back to the system after a very difficult two years, this initiative is a creative way to generate funding for essential metro Vancouver transit services,” TransLink CEO Kevin Quinn said. “We will still need to identify more long-term funding solutions, but this program will improve people’s access to transit, create more transit-oriented communities, and generate new long-term revenue to help us improve and expand our system.”