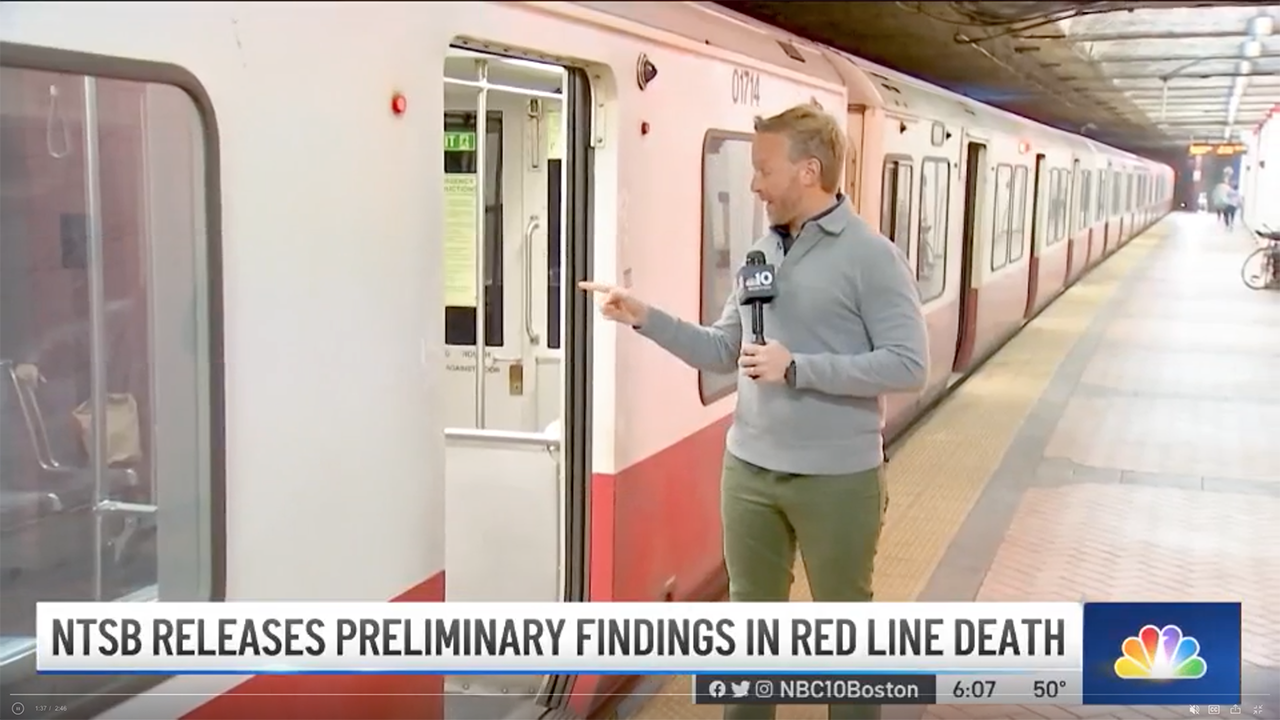 The Federal Transit Administration (FTA) is using authority granted years ago to investigate safety conditions at Boston’s Massachusetts Bay Transportation Authority (MBTA). This authority came from the MAP-21 (Moving Ahead for Progress in the 21st Century Act) legislation and has been used only once before, for an investigation at the Washington Metropolitan Area Transit Authority (WMATA). Prior to that time, the agency had no authority over safety on the nation’s transit.

The FTA announced its new authority on Oct. 27, 2015: “Since 1964 the Federal Transit Administration (FTA), the agency that administers federal assistance for the nation’s transit systems, had been prohibited by law from exercising safety authority over those very systems. This gap in federal authority led to a very confusing patchwork of transit safety standards and oversight from state to state … MAP-21 now grants FTA the authority to establish and enforce a new comprehensive national transit safety and oversight framework. The law requires, among other things, that FTA develop a National Public Transportation Safety Plan and update the State Safety Oversight (SSO) Program to ensure that rail transit systems are meeting basic, common-sense safety requirements. The law also includes important new safety provisions for all public transit operators.” The FTA also announced at the time that it could now direct transit agencies to follow recommendations from the National Transportation Safety Board (NTSB), that the safety program would concentrate on rail, and that the FTA would now fund state safety oversight authorities.

The FTA is working with the states to exercise its authority over safety on rail transit with the SSO program. A post of the FTA website from Dec. 17, 2021 explained the program this way: “The purpose of the State Safety Oversight program is to oversee safety at rail transit systems. The SSO program is administered by eligible states with rail transit systems in their jurisdiction. FTA provides federal funds through the SSO Formula Grant Program for eligible states to develop or carry out their SSO programs.” The Final Rule, which takes up 33 pages in the Federal Register, can be found at https://www.govinfo.gov/content/pkg/FR-2016-03-16/pdf/2016-05489.pdf. The program includes SSO certification, accident notification procedures, training and refresher courses, and formula grants.

The FTA’s first safety inspection and findings concerned WMATA’s Metrorail system in Washington, D.C. and the neighboring states of Maryland and Virginia. According to a statement posted on the FTA website on June 17, 2015, the agency was implementing recommendations from the NTSB concerning deficiencies in tunnel safety on the Metrorail system. The post said: “FTA found serious safety lapses in Metrorail’s Rail Operations Control Center, which schedules and conducts maintenance work, manages abnormal and emergency events, and ensures the safety of trains and personnel on the right-of-way. In key areas, WMATA is not effectively balancing safety-critical operations and maintenance activities with the demand for passenger service.”

The agency issued a safety directive with steps required to correct the deficiencies, and explained its action this way: “FTA conducted the Safety Management Inspection (SMI) as part of its new safety authority established by MAP-21 in 2012. The SMI evaluated WMATA’s operations and maintenance programs, safety management capabilities, and organizational structures to assess compliance with its own procedures and rules, existing federal regulations and FTA Safety Advisories to ensure safety for its passengers, employees and system infrastructure. The SMI report includes 54 safety findings: 44 for Metrorail and 10 for Metrobus.”

On March 18, 2019, the FTA transferred safety oversight authority to the newly-formed Washington Metrorail Safety Commission (WMSC), a new local authority created by Congress in 2017 and consisting of members from the three jurisdictions served by Metrorail. During the time it had direct oversight authority, the FTA issued nine safety directives (later called “Special Directives”), seven Safety Oversight Reports and Audits, and 12 SafeTrack Project Management Oversight Reports concerning the Metrorail system. WMSC acted in a manner similar to the SSO agencies, through an agreement among the District of Columbia, Maryland and Virginia that was later ratified by Congress.

Safety Problems at Metrorail under WMSC

Since its formation, the WMSC has issued 12 “Official Actions” concerning Metrorail. Some continued the enforcement of prior FTA orders, and others dealt with new issues. On Oc. 17, 2021, the WMSC ordered all 7000-series cars to be taken out of service immediately, due to a derailment of Car 7200 on Oct. 12 caused by a defective axle. The Commission also ordered a plan for detecting and preventing wheel gauge anomalies in those cars and returning them safely to service. On Dec. 29, the WMSC extended its order keeping those cars out of service and called for stricter compliance with the return-to-service plan. Metro relied on some older cars to provide service until the 7000-series cars return.

On May 16, 72 Metrorail operators were removed from service, following an audit by the WMSC that revealed that nearly half of the system’s 500 operators’ recertifications had lapsed. The operators who were suspended had been out of compliance for more than a year. The audit was conducted in late 2021 and released April 12, 2022. The next day, WMATA CEO Paul Wiedefeld retired immediately—six weeks prior to his official announced date and Chief Operating Officer Joe Leader resigned. Andy Off will serve as interim General Manager and CEO until Randy Clark replaces him in late August. On May 23, WMATA said that the 7000-series cars will return to service this summer.

The history of safety problems at Metrorail, even though unique, might be considered a case study in how the FTA became involved with safety oversight and was able to transfer that responsibility to a local agency.

Recent safety problems on the MBTA have prompted FTA’s second probe in the Boston area demonstrate that. According to a May 12 report by Chris Lisinski of State House News Service, “The Federal Transit Administration plans to launch a nearly unprecedented safety inspection of the MBTA in the wake of a string of breakdowns, crashes and fatal incidents, including a Red Line door malfunction on April 10 that killed rider Robinson Lalin.” The Boston Globe first reported the FTA probe on May 9.

Two days after the Globe report, Spencer Buell listed some of the T’s recent safety problems in a commentary for Boston Magazine: “Most recent was the case of Robinson Lalin, the man who was dragged to his death at Broadway Station in April after getting his arm caught in a Red Line train door that National Transportation Safety Board found was not functioning properly. Earlier, there was a Green Line crash in July that injured dozens of passengers, a Commuter Rail crash in Wilmington that killed a woman in her car after apparent ‘human error’ involving a crossing gate, and the horrific incident on a Back Bay Station escalator that left commuters bloodied and tumbling on top of one another. And there was the case of Boston University professor David K. Jones, who fell to his death on a set of rusted-out metal stairs near JFK Station that had been fenced off, but sat there unrepaired for more than a year.”

Lisinski had reported on May 2 about the preliminary report from the NTSB, concerning the incident that caused Lalin’s death: “MBTA trains are designed not to move when any passenger door is obstructed, but when NTSB investigators examined the car where Lalin became trapped, they found a ‘fault in a local door control system that enabled the train to move with the door obstructed.’ The train departed Broadway, fatally dragging Lalin more than 100 feet along the platform and the ground near the tracks,’ NTSB said.” Lisinski also reported that, according to the NTSB, the MBTA immediately inspected the other cars of that type and did not find any to have a similar fault.

Darryl C. Murphy reported on WBUR on May 10 that the FTA “is set to inspect the MBTA’s transit operations and maintenance programs, citing concerns about safety and oversight.” Murphy also reported that the FTA had given notice on April 14 that the inspection was coming: “In a letter to T General Manager Steve Poftak, the agency said it ‘is extremely concerned with the ongoing safety issues’ at the T and ‘remains unclear what actions the MBTA Board and executive team are implementing to prevent and address the system’s safety violations.’”

In a statement issued on May 11, Transit Matters, a local rider-advocacy organization, expressed its concern about funding, transparency and governance at MBTA. Transit Matters also speculated on what the T would be like in the event of an FTA takeover: “The stakes are high. A full FTA takeover could result in forced fare hikes and service cuts, and put the federal government in charge of setting priorities. This is unacceptable and would be a significant setback for priorities like Bus Network Redesign, low-income fares and more. We need new resources and strong leadership because climate change, as well as racial, socioeconomic and regional equity demand that the T be able to focus on both safety and expanding service and access.”

The statement concluded with a summary of these concerns: “The first step must be eliminating the projected Operating Budget deficit by taking decisive legislative action now. The second step is to have the legislature step up and provide the accountability and transparency the MBTA Board has failed to provide. This means holding hearings and demanding follow-up on FMCB [the Financial Management Control Board, which previously acted as the agency’s board] efforts. Lastly, the Legislature should commit to having a sustainable revenue source for both the capital and operating budget by the start of the next fiscal year. These decisive actions will show that the Commonwealth is committed to funding and maintaining the fourth-busiest public transit system in the country, fully and appropriately, free of federal control.”

Out of Sight, But Not Out of Mind?

It appears that the FTA only uses its safety-related authority sparingly. It appeared to steer Metrorail in the right direction (although that system is still having its problems), and it has highlighted concerns at the MBTA that appear to need strong remediation. It is unclear how the Boston case will turn out, or when the FTA will again see the need to order corrective measures. Still, Congress gave the agency authority to oversee safety on transit, particularly rail, and it appears to be doing its job.