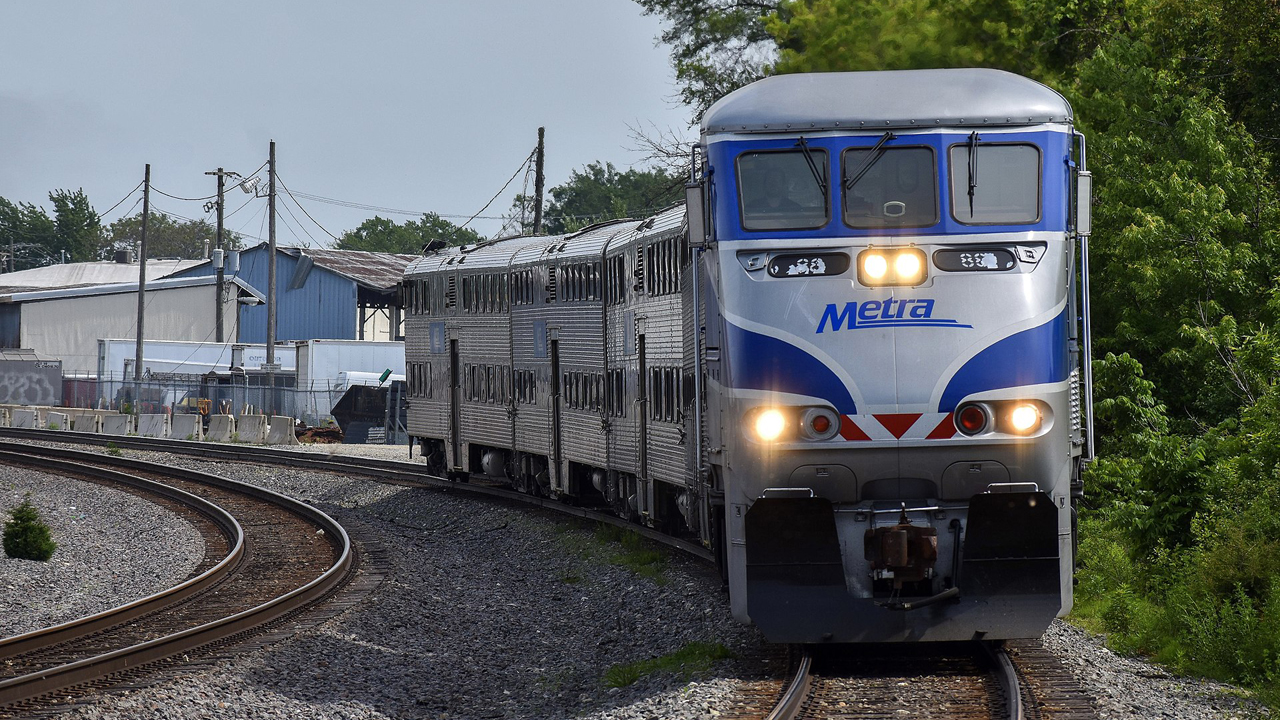 It has now been more than six months since the COVID-19 virus hit the United States and Canada, and also hit transit hard in both nations. The riders disappeared. On some systems, ridership dropped as low as 5% of prior levels. Service plummeted in many places, too. Here at Railway Age and its sibling publications, we kept track of the downward progress of everything on rails: freight and passenger/transit. This writer was on the team that documented rail transit’s decline. Ridership is beginning its slow upward climb; how far up it will eventually go is anybody’s guess. So is service; in some places more than others. This article will present a comprehensive look at how rail transit is returning.

On Saturday, Oct. 10, the Rail Users’ Network (RUN) sponsored an on-line mini-conference with the theme: “The Road to Recovery: How a Healthy Mass Transit & Intercity Rail System Can Aid the Nation’s Economic Recovery.” Among the presenters was Arthur S. Guzzetti, Vice President for Policy at the American Public Transportation Association (APTA), who gave an overview about the negative effects of the virus on transit generally, the steps that transit providers are taking to deal with the pandemic and stage their comeback, priorities for the future, and how different systems are managing their different modes. Mark Dowd, Chief Innovation Officer for New York’s Metropolitan Transportation Authority (MTA) described the cleaning regimen and safety precautions that the city’s subway system is taking. The conference had a positive feel, with a note of caution, but the only way to see how transit is actually doing is to check on the service currently being offered.

We did that by checking the websites of every rail transit provider in the United States and Canada. Our detailed report from that survey is appended to this article, and you can access it below. While there are differences in how the various providers have fared, especially in terms of the service they offer today, nearly all of their recent experiences have some features in common.

One such feature is that ridership fell precipitously last spring. On some large-city rail transit lines and commuter railroads, it fell by as much as 95%. Revenue essentially slowed to a trickle, but expenses actually increased, because of the need for an augmented cleaning regimen and other health precautions. To make matters worse, some providers could not even collect fares from the loyal passengers who kept riding. There were machines to collect rail fares (as long as they worked properly), but most providers used the rear doors on buses for boarding. That policy protected drivers, but it also kept riders away from the farebox. At this writing, many, but not all, transit agencies are again taking cash fares and requiring riders to board buses through the front door and pay their fares.

Transit everywhere is facing financial woes; often at unprecedented levels. With entertainment and sports venues closed down, there is less reason to go to the cities that offer such amenities. Cities like New York and New Orleans, which depend on tourism to keep the local economy going, have been hit particularly hard. Businesses considered “non-essential” were shut down for months. Restaurants got by on take-out, delivery, and outdoor seating during the warm weather, but it is getting colder now. Many office workers are working remotely and others have lost their jobs entirely. Commuting is not what it was before the virus hit, and it is highly unlikely that most former commuters will return to their old routine of commuting to the office five days a week. With fewer riders, commuter railroads must find new sources of revenue. It is probably time for new fare structures that would accommodate the “new” commuting, too. Metrolink in the Los Angeles area is experimenting with a “five-day” fare, which includes five round-trips that can be taken within 30 days. It is only sold on the Metrolink app.

Now that the fall is here, rail ridership is recovering slowly; it is now about 20% to 25% of pre-COVID-19 levels. But how far will it rise, how long will that take, and how long will federal and state aid, such that it is, last? The CARES (Coronavirus Aid, Relief and Economic Security) Act authorized $24.9 billion for the nation’s transit, which was distributed by formula. New Jersey Transit’s grant will last for much of next year, probably through the end of the fiscal year next June. New York’s Metropolitan Transportation Authority (MTA) got $4 billion, but it will not last that long. There are already dire predictions of the agency’s deficit rising as high as $50 billion in the future. Local transit officials have threatened massive service cuts, fare increases and a halt to the agency’s capital program if help does not arrive soon. At this writing, it does not appear that much help will be on the way until a new Congress is seated and a new Administration (if the electors give us one) takes office. That will not happen until January, at the earliest. Other lines are in trouble, too. Caltrain, which once brought full trainloads of commuters from the peninsula south of San Francisco into downtown, no longer carries many of them. The results of the upcoming election may determine whether or not the line survives.

Despite their financial woes, many transit providers are doing the best they can to provide robust service, especially on local rail transit. That is happening in Boston, New York City and its suburbs (including in New Jersey), Philadelphia, New Orleans, Los Angeles and a number of other cities. There are exceptions, though. Transit in San Francisco today may be even worse than it was when an earthquake and resulting fire destroyed much of that city in 1906. BART trains are running at reduced frequency deep under Market Street, but the city’s municipal transit authority (Muni) is not running any rail transit at all: no unique cable cars, historic streetcars, or light rail. The latter will not come back until early next year, and nobody has ventured a guess about the others. Muni’s bus system, which had 89 routes on its pre-COVID-19 schedule, dropped to a low of 17 routes, and has fought its way back to 37. Still, San Francisco always prided itself on its transit, and many residents rode it, rather than spending most of their income on an automobile. Tourists liked to ride it, too. If that sort of devastation could befall a transit system as strong as San Francisco’s, what could happen to weaker systems elsewhere?

Sadly, not many motorists understand that. Many of them believe that riding transit is unsafe, even though early studies that claimed that transit is hazardous are now being questioned. APTA released a report by famed consultant Sam Schwartz (“Gridlock Sam”) last month. It concluded that riding transit is safe, that a rider is unlikely to get the virus while on transit. Other studies from Europe and Asia have reached the same conclusion. Still, prejudices die hard, and discretionary rail ridership has not yet recovered strongly.

One surprising trend in some cities is that bus ridership is picking up faster than rail ridership. There appears to be one overriding reason for that. Many workers who hold low-wage jobs, many of which are considered “essential” employment, depend on transit and must use it to get to work. For many, that means the bus, although some ride the train or streetcar. Few of the higher-income commuters from the pre-COVID-19 era ride the trains today, as many of them work remotely, at least on some workdays. Discretionary rail travel is down, also because there is so little activity in the cities these days. That activity will not begin to pick up until at least the middle of next year, at the earliest. Still, workers who must get to their jobs still have their buses and trains, at least in many parts of the country.

One bright spot is that transit riders are wearing masks, and employees are usually enforcing that requirement. This writer has referred to today’s riders as “The daring and resourceful masked riders of the trains.” It is an appropriate title. We are willing to take the train to get where we want to go. We also observe good health practices, like spreading out on the train and wearing our masks. It is not always easy to spread out on bus, or even an LRV, because they can be crowded at times. The employees deserve credit, too. They have been willing to tell a non-compliant rider: “Put on your mask or get off,” and this writer has seen crews put a rider off a train for refusing to wear a mask. In New York, Toronto and other cities, law-enforcement agents are issuing tickets to unmasked riders. One new development may be somewhat ominous, though. The Northern Indiana Commuter Transportation District (South Shore Line), which carries commuters and other riders form northwestern Indiana into Chicago and back, now has a “mask optional” car on each train. To this writer, that sounds like the scariest car on any railroad.

This year, especially the past six months, has been the wildest and fastest-paced in living memory for many people, and the most fraught with uncertainty. As this writer noted in an essay entitled “Jazz and Rail,” 1920 was a fast-paced and uncertain year that followed the previous global pandemic, which everybody feared would come back and ravage the world again. Eventually the uncertainty subsided, although that may have been an illusion, considering the way the past century has gone. Someday, the current pandemic will relax its grip (to some extent, at least), educational and entertainment venues will reopen, the cities will come back, and everybody will settle into the “new normal” that will have become their routine. Some discretionary riders will return to transit, and it is possible that politics may swing toward better transit and more passenger trains, as part of a less wasteful and more environmentally sensitive plan.

In the meantime, how is rail transit doing in the U.S. and Canada, six months after the initial cuts spurred by the COVID-19 virus? Download the report: