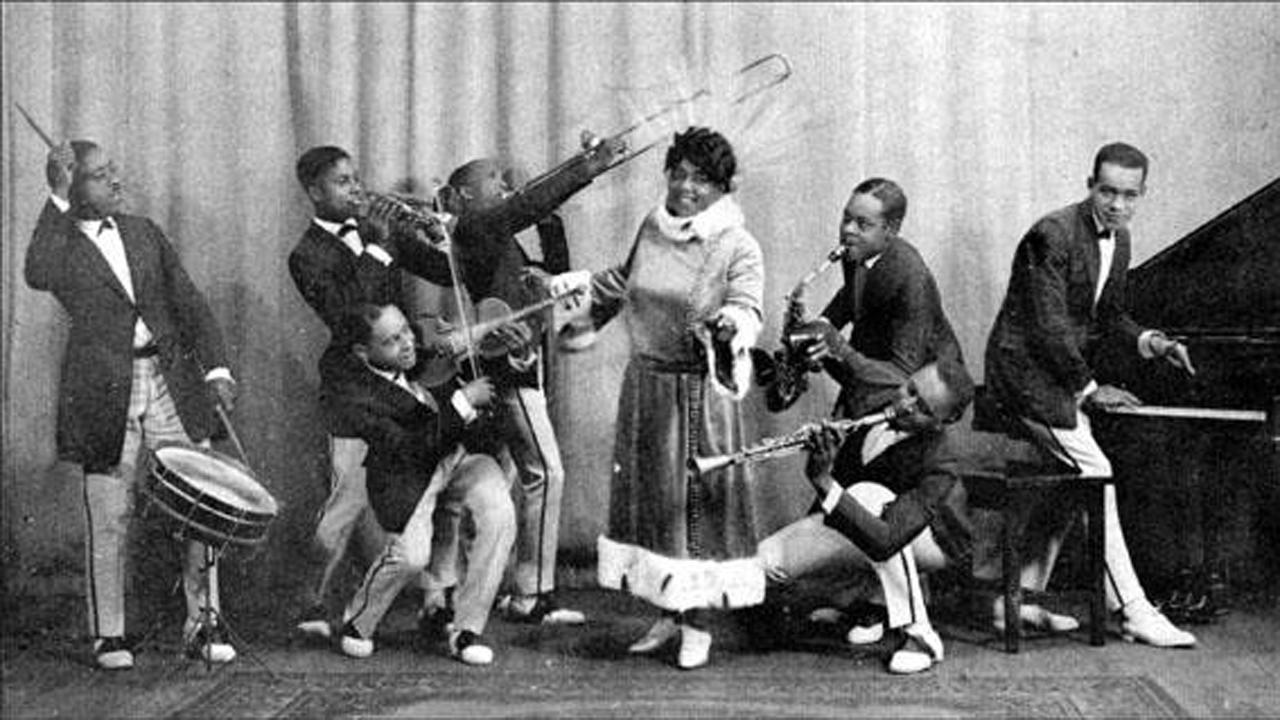 Exactly a century ago, on Tuesday, Aug. 10, 1920, diversity in music took a giant leap forward. The occasion was the first recording session that featured a black popular singer, backed up by a jazz band from Harlem, performing the first record widely accepted as an example of the blues. That event changed the music business forever, and reinforced the universal kinship felt by everyone who plays jazz, or has a serious interest in it. It is not unlike the kinship shared among those of us who are serious about our trains, our transit, and the policies and procedures that keep them in service.

This piece is not a news story or a commentary about Amtrak or rail transit. Rather, it is a personal essay. Jazz and rail bring people together, and even I was surprised to learn of the breadth of the intersection of these two communities. To add to the timeliness of this writing, the musical landmark I cite may have foreshadowed the events that are taking place around us today.

The tune in question was Crazy Blues by Mamie Smith and Her Jazz Hounds, No. 4169 on Okeh Records. Its composer, Perry Bradford, had persuaded the label to take a chance on a previously overlooked segment of the jazz community. The recording was a sensation. It sold more than 75,000 copies in the first month, and eventually became one of the first million-sellers. It was not a true blues song, but a hybrid with 12-bar and 16-bar strains.

There were earlier blues songs, by both black and white composers. Bands and artists of both races had made records previously (sadly, not playing together yet). The 1917 records by the Original Dixieland Jazz Band (originally spelled “Jass”), a genuine New Orleans band of white musicians, had opened the door. Crazy Blues opened it much wider, and for a broader mix of performers and listeners.

Crazy Blues enjoyed a popularity comparable to “going viral” today. Mamie Smith soon had competitors like Mary Stafford, who recorded it on the Columbia label. Noble Sissle and Eubie Blake, the famous team of Sissle & Blake, recorded it both separately and together. Separately, Sissle recorded it with a studio orchestra behind him, and Blake cut a piano-roll version. Pete Wendling, the piano-roll king at the time, did a version that interpreted the song differently from Blake. The ODJB, which started it all, recorded its own version, which interpolated It’s Right Here for You, the now-forgotten tune on the flip side of the Okeh record. Everybody, regardless of color, sang it, played it, or at least listened to it.

Crazy Blues is still performed today. I played it, too, back when I played piano actively. Jazz became more diverse over the years, but advancement often required a struggle.

It was in the fall of 2018 that I first met Editor-in-Chief, William C. Vantuono. Just before our second personal meeting he had run my review of Randal O’Toole’s latest book, an anti-passenger-train and anti-transit rant (Book Review: An Anti-Passenger-Rail Manifest). I had thought of it as my “audition” piece, and the analogy appeared to be apt. Bill and I talked about jazz for more than a half-hour before the conversation turned to rail. He is a drummer and a devotee of all jazz, large groups in particular: Stan Kenton’s full and hard-driving band from the 1940s to the 1970s, Woody Herman’s Thundering Herd, Count Basie, Duke Ellington, Thad Jones/Mel Lewis, Buddy Rich, etc.. I played jazz piano and ragtime, enjoyed playing the old “standards” and had done jazz shows on community radio stations, including Columbia’s WKCR, decades ago.

I’ve learned of many other people who “know the railroad” and dig the sounds, too. Dick Spotswood, who did a jazz show in California for decades, has also written for Railway Age, recommending A “Two Amtrak” Concept here on October 10, 2019. Carl T. Jackson, who is in charge of the El Paso streetcars (now suspended because of the virus), has played gigs as a drummer and has the videos to prove it. Chicago advocate Steven Hastalis, who retired from the CTA after a long career, still plays flute in the jazz-oriented concert band based in his North Side neighborhood. At the opening reception of a conference sponsored by the Rail Users’ Network (RUN) in Philadelphia in 2016, I shared a conversation with RUN Vice-Chair Andrew Albert and Maurice Bayard, a scientist who was on the Advisory Committee at SEPTA, the local transit provider. All of us played jazz piano! Sadly, there was no piano around which to gather.

There are other connections between jazz, trains and rail transit. Almost 50 years ago, there were Dixieland jam sessions on Monday nights at Arthur’s Tavern, a jazz club in Greenwich Village (the neighborhood that New Yorkers always call “The Village”) in New York City. I had the honor of sitting in with Tony Parenti, who had played clarinet with early jazz bands in New Orleans. Doubtless, he rode the 1923-vintage Perley-Thomas streetcars that still run on St. Charles Avenue in that city today. Trains have inspired jazz composers and musicians for generations; think of Count Basie’s 9:20 Special (Harry James did a hard-driving version, too), Duke Ellington’s Daybreak Express, Happy-Go-Lucky Local and many other great songs of the era. The Duke’s arranger, Billy Strayhorn, told us how to get to Harlem on the subway with Take the A Train. The directions have not changed, and the R-9 cars that folks used in 1938, when the song was written, still run on special occasions.

I once attended a performance by a New York band that played straight-ahead swing in the Kansas City style. The leader, who played trombone and was also a practicing attorney, told the audience: “In jazz, we don’t care what you look like. We only care what you sound like.” Of course, we already knew that, but jazz is for everybody who is willing to appreciate it, whether you play it or only listen to it.

Trains and transit are also for everybody. It took a monumental struggle to achieve that result, but now we all ride together. It was not always that way. The historic streetcars in New Orleans that Tony Parenti rode during his youth and I rode as recently as last year still bear tiny scars of the past: small holes at the top of each seat, which once held signs that assigned those seats to riders according to their color. Today’s trains and transit serve a diversified ridership, and we will all rise or fall together, depending on events that are about to occur. Transit managers and advocates are aware of that, too.

In these uncertain times, we make our best efforts to keep Amtrak trains and our local transit running and relevant. Hard times may be coming, but jazz people and transit riders are resilient and have gotten used to celebrating our diversity. Come jam with us—at least if you can cut it. In any event, you are always welcome to come ride with us. We are always ready for the next journey or the next chorus.

When Mamie Smith’s version of Crazy Blues was released exactly a century ago, times were turbulent and uncertain, much as they are today. The last great pandemic, which had killed more than 50 million people worldwide, had just subsided. Nonetheless, the fear that it could return still lingered. The worst war to date had ended only 21 months before, and Europe lay in ruins. Railroad mileage in the United States had peaked the previous year, and the long decline was just beginning. Politics were as contentious as they are today. President Woodrow Wilson fought constantly with Congress and performed badly at the post-war treaty negotiations in 1919. He was so weak that the nation was essentially leaderless, and there is strong conjecture today that he was a victim of the pandemic himself, and that he did not recover well. Sadly, too many people from all walks of life and at all levels of society are suffering the same fate today.

It seems that Perry Bradford foreshadowed some of today’s events in his lyrics to Crazy Blues. The protagonist in the song was a woman who had the “Crazy Blues” because the man whom she had loved had left her. She even contemplated suicide, using a train for the job: “Went down to the railroad and laid my head on the track. I thought about my baby and then I quickly snatched it back. My baby’s gone and gave me the sack.” How many of us today are similarly uncertain about our futures? We know there are some, and we can only hope that there are not too many.

Even more ominously, the woman in the song went on: “Goin’ to do like a Chinaman, get some hop. Get myself a gun and shoot myself a cop.” It appears uncannily eerie that, today, relationships between the police and the communities they patrol are in such dire need of reform, repair and a new understanding that can benefit everybody.

Despite its disturbing lyrics, Crazy Blues changed the music business for the better. For the first time, black customers and the dollars they spent on records were taken seriously. There were white fans, too, and jazz and blues flourished to everybody’s benefit, regardless of who played them or listened to them. It has been a struggle, but music has become more diversified over the years. So has the ridership on our trains and our transit. We all ride together, but what will be there for us to ride in the future?

In 1954, Rosa Parks refused to go to the back of a local bus in Montgomery, Ala. Rev. Martin Luther King, Jr. (the pastor of a local church at the time) and the rest of the black community refused to ride the segregated buses. Over the years, the ensuing struggle resulted in the end of race-segregation on transit and elsewhere, one of the greatest victories ever achieved by a community of persons who depended on transit for their mobility.

Rosa Parks and everyone else who fought through the decades for civil rights and human rights deserve our deepest respect. But in Montgomery today, there is very little local bus service; there are only a few intercity buses serving the city; and there are no Amtrak trains. Rosa Parks acted heroically in refusing to go to the back of the bus, but at least she had a bus.

Despite the chaos occurring around us today, things are improving on several fronts. Since the Minneapolis police incident in which George Floyd was killed, the movement that stemmed from that horrific incident has prompted some reform in police policies, re-examination of honoring the Confederate leaders of Civil War in the 1860s, removal of the rebel symbol from the state flag of Mississippi, and other measures. All of these are a step in the right direction against all forms of racism that was inconceivable only a few long months ago. Jazz people have always known that Black Lives Matter, as well as those of everybody else. We strive for harmonious sounds, not discordant ones, whatever our personal definition of “harmonious” may encompass.

There are many aspects of American life that need to be reformed, from policing to transportation policy. Uncertainty brings change, but genuine improvements rarely come easily. In this uncertain year of 2020, we look back to a musical event from the uncertain year of 1920, and we hope that times will get better. Jazz people appreciate each other, whoever they may be. So do those of us who ride and care about our trains and transit. Now our task is to persuade others to follow our example.

I dedicate this column to our chief editor, with profound respect for his knowledge and competence, about jazz, and about everything that pertains to rail.