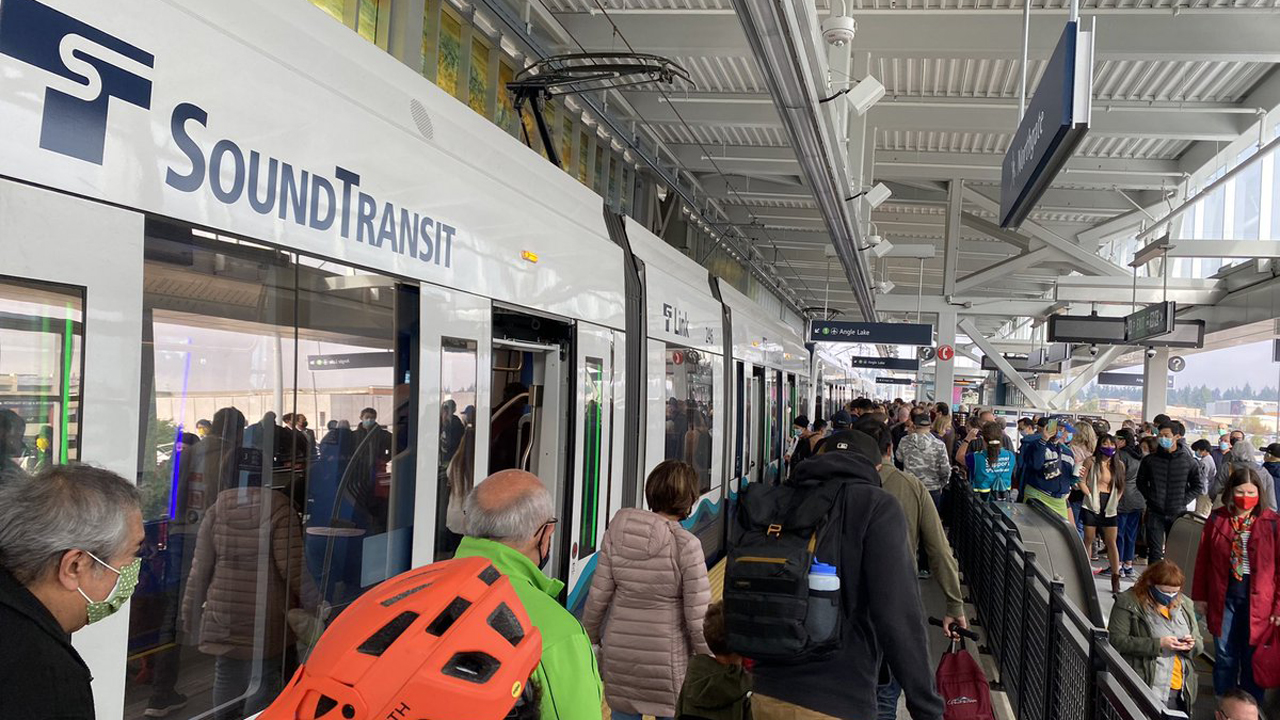 Sound Transit on Oct. 2 opened its 4.3-mile Northgate light rail extension, marking the start of the Seattle-metro-area transit system’s three-year plan to triple its light rail network from 22 to 62 miles.

Service to Tacoma’s Hilltop slated to begin in 2022; East King County in 2023; and Lynnwood, Federal Way and Downtown Redmond in 2024, according to Sound Transit.

The Northgate extension project adds three new stations, at Northgate (elevated), Roosevelt (underground) and U District (underground), with trips of just 13 minutes from Northgate to downtown Seattle, the agency reported. (See map below.) Except for 0.8 miles of elevated track at Northgate, the 4.3-mile extension is in subway. Daily ridership is projected to reach 41,000-49,000 by 2022. Additionally, the opening of Northgate provides connections to and from local and regional bus routes.

The project’s $1.9 billion baseline budget includes a $615 million credit agreement under the Transportation Infrastructure Finance and Innovation Act (TIFIA), providing “significant long-term savings for regional taxpayers through reduced borrowing costs,” according to Sound Transit, which noted that the project is coming in about $50 million under budget.

Voters approved the Northgate Link extension in 2008 as part of the Sound Transit 2 ballot measure, and construction began in 2012. Tunneling work was performed by JCM Northlink, a joint venture of Jay Dee Contractors, Frank Collucio Construction Company and Michaels Corporation, and twin boring machines completed the 3.5-mile tunnels in 2016. Guideway construction wrapped up in 2018 and rail installation in 2019. Construction of all three stations was substantially complete at the start of 2021, and since August, trains have been running simulated service, during which all Link trains continued without riders from University of Washington Station to Northgate, testing catenary traction power and signal systems, according to Sound Transit. Hoffmann Construction was the contractor for the University District and Roosevelt stations; Absher Construction was the contractor for Northgate Station; Stacy and Witbeck was the trackwork contractor; and Mass Electric was systems contractor.

Engineering and professional services consultancy WSP USA provided the project’s final design, which was completed in 2016. The firm said it participated in the “coordination with King County Metro and the Seattle Department of Transportation on transit, pedestrian and traffic operations, and was responsible for the aerial guideway and Northgate Station design, project integration, track design, mechanical engineering, station and tunnel ventilation, traffic and civil design for Northgate Station, and quality assurance/quality control.” McMillan Jacobs Associates served as the prime contractor for the project, and KPFF provided civil design for the University District and Roosevelt stations and a portion of Northgate Station.

“Extended lengths of the WSP-designed underground track were designed on ‘floating slabs’ to minimize disturbances to nearby University of Washington laboratories,” WSP reported. “Earthquake concerns and requirements were a major consideration and addressed in the project design, as Seattle is in a high seismic region and the Northgate Link is five miles from an active fault.”

A new pedestrian bridge, the John Lewis Memorial Bridge, also opened on Oct. 2 to provide pedestrians with “a safer connection to Northgate Station over Interstate 5 to North Seattle Community College and the University of Washington Medical Center-Northwest, and for communities on the west side of the freeway,” according to WSP.

“The opening of Northgate Link is a great leap forward for Puget Sound commuters, the first of many leaps forward for Sound Transit in the coming years,” said Sound Transit CEO Peter Rogoff, who will step down as agency leader by May 31, 2022. “As Sound Transit looks to nearly triple our light rail network in just the next three years, we are thankful for the hard work and dedication of staff and the construction workforce in achieving this monumental feat in the middle of a pandemic.”

“The opening of the Northgate Link Extension will vastly improve travel between North Seattle and downtown,” FTA Administrator Nuria Fernandez said. “With a seamless connection to the rest of the Link network, more people can easily reach jobs, schools, and other opportunities throughout the region and replace sitting in traffic with safe, fast and efficient light rail service.”