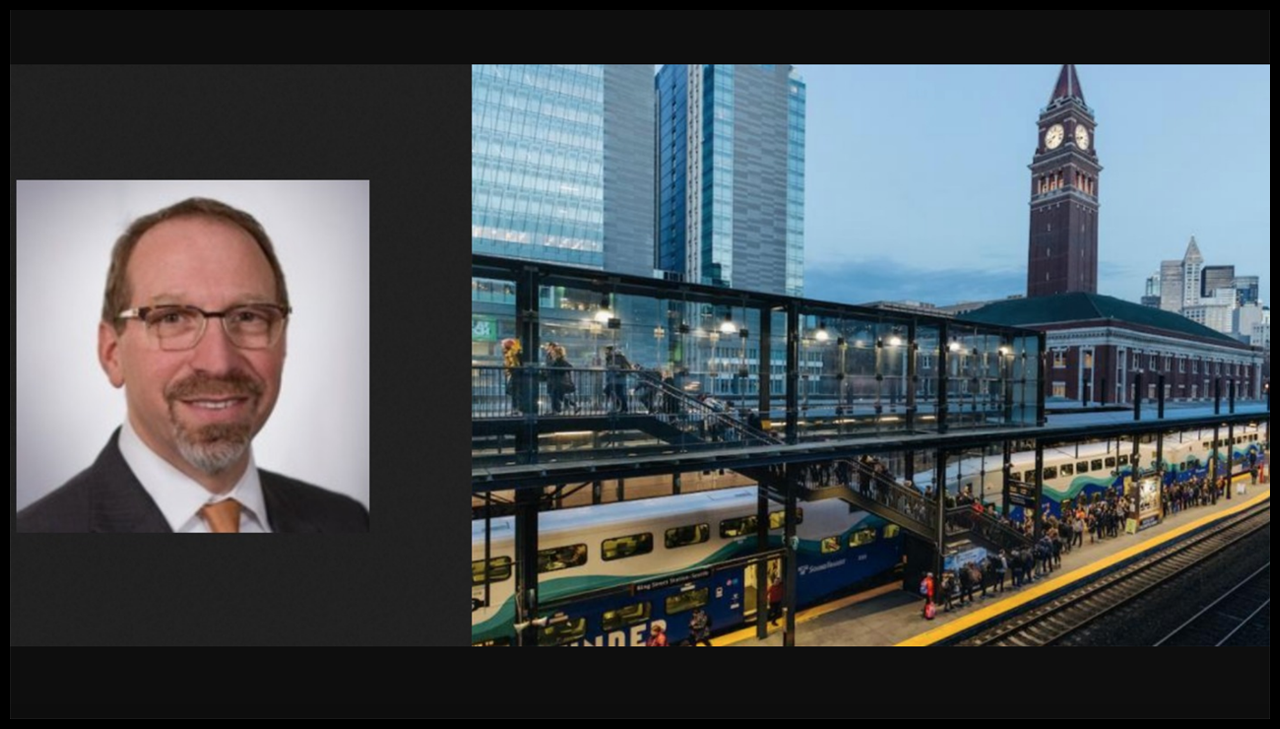 Sound Transit CEO Peter Rogoff will remain in his position until May 31, 2022.

The Sound Transit Board on Sept. 23 voted not to approve a full one-year contract extension for Sound Transit CEO Peter Rogoff. Chair Kent Keel said during the Board meeting that after more than six years of service, Rogoff recently informed Board members that “he did not foresee remaining in his role beyond the end of 2022”; Keel said he and others did not believe they should wait until 2022 to start searching for a new leader of the transit system serving the Seattle metro area.

Keel, who is also a Councilmember for University Place, Wash., said in a statement:

“Given the volume and intensity of current and upcoming work and the agency’s needs and interests, the Sound Transit Board has exercised its discretion to proceed immediately to initiating a national search to select the agency’s next successful leader. Now is a strategic time to identify our next CEO ahead of work to open light rail to the Eastside in 2023 and to Lynnwood, Federal Way and Downtown Redmond in 2024. Peter has agreed to remain in his position until the second quarter of 2022 [through May 31, 2022] to assist in an orderly transition.

“The Sound Transit Board is grateful to Peter for all his contributions supporting the realization of the largest transit system expansion in the nation. Upon his arrival in early 2016, he worked with the Board and communities across the region to help shape and earn voter approval for the Sound Transit 3 Plan while simultaneously leading efforts to advance major light rail expansions to the east, north and south. At present, all but one of Sound Transit’s seven major construction projects are on time and performing on or below budget, putting the agency on a very solid path to nearly tripling the size of its light rail network over just the next three years while it continues to advance further expansions.

“Peter not only helped design the largest transit expansion program in America but convert the agency to one that can deliver on its very ambitious plans. At the same time he sharpened the agency’s focus on sustainability and improving riders’ daily experiences while advancing equitable access to transit and affordable housing.

“Peter’s legacy at Sound Transit includes applying his deep federal experience to help secure critical funding for our region. He has worked closely with our congressional delegation as well as the Obama, Trump and Biden administrations to obtain unprecedented levels of federal grant and loan support. He has also ushered in reforms to bring about a more collaborative, disciplined and informed annual budget process, all to the great benefit of Puget Sound taxpayers.

“The Board sincerely thanks Peter for his accomplishments leading Sound Transit’s dedicated and talented staff, and for his continuing contributions over the next six to nine months. The Sound Transit Board will soon proceed to forming a search committee and launch our recruitment to identify Peter’s successor.”

On Nov. 19, 2015, the Sound Transit Board unanimously selected Rogoff to lead the agency, succeeding Joni Earl, who was on medical leave and retired in March 2016. Rogoff had been serving as Under Secretary of Transportation for Policy in the U.S. Department of Transportation; he was confirmed for the position by the United States Senate in July 2014. Previously, in May 2009, the Senate confirmed him as President Obama’s Federal Transit Administrator. Prior to his FTA appointment, Rogoff served for 22 years on the staff of the Senate Appropriations Committee, including 14 years as the Democratic Staff Director of the Transportation Subcommittee, led by Senator Frank Lautenberg of New Jersey and Senator Patty Murray of Washington.

At the Sept. 23, 2021 Board meeting, Rogoff gave the following remarks:

“First let me say I’m really grateful for your [Kent Keel’s] kind remarks and all the remarks of the Board members talking about my contributions over the past six years, but I hope we will all recognize that these accomplishments are truly the work of the staff. My role as CEO has been to serve as a figurehead and a spokesperson, and provide guidance and advice where I can, and help us avoid some pitfalls, and then most importantly, get out of the way.

“As I’m sure you can appreciate, the job of heading an agency that is executing the largest transit expansion in America, all while operating the service every day of the year, is simultaneously exhilarating and exhausting. The exhilaration never really wanes, but the exhaustion sometimes spikes. I’ve heard from my industry colleagues in the transit industry, the average term of a transit chief executive is somewhere between four and five years, and I’m about to enter year seven.

“Now back when I served in previous roles in Washington, D.C., funding, regulating and overseeing the nation’s transportation industry, I and my colleagues were required to spend a huge amount of our time focusing on a short list of agencies spread around the country who were over-promising and under-delivering with taxpayer dollars. It didn’t matter if we were dealing with state highway departments or airports or seaports or transit agencies; it just took up an overwhelming amount of our time. And when I came to Sound Transit six years ago, I was determined that we would never be among that group, and with the Board’s strong support, we never have been. In fact we’ve actually embodied the opposite. We’ve distinguished ourselves nationally in building quality expansions within baseline budgets, while as [Board member and Washington State Secretary of Transportation] Roger Millar just pointed out, building multiple mega-projects at the same time.

“We are increasingly being identified as being the best in class when it comes to things like sustainability, creditworthiness, equitable access, grantsmanship, and generating affordable housing adjacent to transit. We really do have a lot to be proud of, and I can’t be more optimistic about Sound Transit’s future.

“I want to personally and sincerely thank every Board member for giving me the opportunity to head this agency for the last six years and into the second quarter of next year. This assignment has easily been the most challenging but also the most rewarding job I’ve had in my 40 year career, and I am grateful. Most of all, I am grateful to our outstanding staff, who’ve allowed me to stand on their shoulders and get too much credit for their hard work. One thing that is for certain, I will continue to be the loudest cheerleader for the Sound Transit staff and for all of their accomplishments even after I step to the sidelines next year.

“But here’s the challenging news: Between now and the second quarter of next year, we have actually a lot of work to do on capital projects, on budgets, on policies, and in community conversations, and you can count on the fact that I will continue to bring forward to the Board necessary and timely decisions, both the easy ones and the hard ones. I plan to continue to put my full heart into every day that I have the privilege to serve in this job … into the second quarter of next year, and I do want to thank the Board again for the opportunity to do so.”

Responding to a $6.5 billion affordability gap, the Sound Transit Board in August adopted a realignment plan that guides delivery dates for voter-approved transit projects that are not already under construction.

The move followed 17 months of discussions and engagement with jurisdictions and stakeholders. Sound Transit said that the steep rise in real estate and construction costs plus advancing environmental review and project designs have driven up expansion costs, contributing to the affordability gap for completing projects on earlier schedules.

The realignment plan covers the next waves of Sound Transit projects, including reaching Tacoma, Everett, West Seattle and Ballard, and delivering bus rapid transit and Sounder expansions, Kent Keel said on Aug. 5. He noted: “These projects are critical for keeping people moving in the face of our population growth and for protecting our economy and environment. To succeed, we will need expanded collaboration at the local, state and national levels.”

The realignment plan does not affect projects already under construction, including light rail extensions to Northgate, Tacoma’s Hilltop neighborhood, Bellevue and Redmond, Federal Way and Lynnwood, as well as the Puyallup Sounder garage. Sound Transit on Aug. 5 said that by 2024, it is poised to open those projects on schedule, and all but Tacoma Hilltop are currently trending on or below budget.

On Sept. 17, the U.S. Department of Transportation announced that Sound Transit would receive up to $3.84 billion in Transportation Infrastructure Finance and Innovation Act (TIFIA) loans to finance the Downtown Redmond Link Extension and refinance five additional projects.